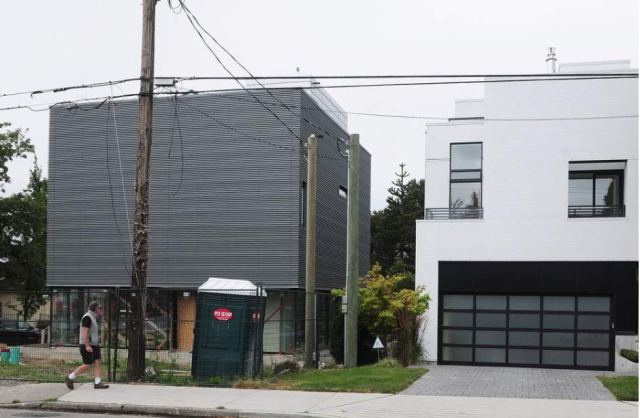 Some Vancouverites are upset over the house to the left in the photo above. “Vancouver’s Most Hideous Urban Design for 2016: Why residents are up in arms over this house,” reads the headline in The National Post.

So why are residents up in arms over this house? Let me guess. There is a clue in the headline: it is Vancouver’s “most hideous urban design for 2016.” Talk about a headline belaboring the obvious! That black box has replaced a house of very pleasant traditional lines, depicted below left. Although the house above on the left is certainly uglier than the house on the right, the latter, which copies the past in the Corbusian manner, is no candidate for the charmer of the year award. Why wasn’t residential Vancouver just as upset by that house as it supposedly is by its glowering new neighbor? 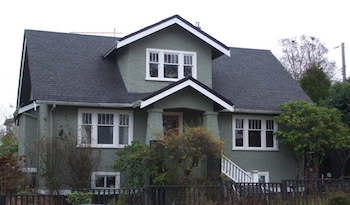 The architect, Tony Robins, proposes another, um, house in Vancouver that has raised eyebrows. Pictured at the end of this post, it is considered a “heritage infill” project, not completed (or even really planned, perhaps). Hasn’t anyone noted its resemblance to Rem Koolhaas’s “Big Pants” building for China’s CCTV in Beijing? Unlike Big Pants, which stomps with metaphorical rage upon the Chinese people, Robins’s proposed building almost literally stomps on, or at least threatens to collapse upon, the old house above which it hovers. Who would want to live there? Why wasn’t Vancouver up in arms over this proposal? Perhaps because it, like its neighbors, is apparently a commercial enterprise? So what?

The National Post’s writer, Cheryl Chan, talked to the neighbors.

A neighbour who lives across the street was befuddled by the design. “Where are the windows?” she asked. “Is that black the end result or are they going to stick something on the front?”

Are there no courts of law to resolve this sort of dispute? Does the neighbor quoted above, who apparently understands the threat to her own house’s value, have no recourse? The National Post story continues, quoting a historian’s description of housing trends.

Michael Kluckner described the house as “unneighbourly” but par for the course — the ultimate expression of our society’s evolution from a front-porch culture to a courtyard culture.

A century ago, Vancouver houses looked outward, their windows as eyes on the street with front porches that allowed for interaction with neighbours, said Kluckner. But throughout the decades, “there was a turning inward that has accelerated.”

Modern homes now usually present “an almost blank face on the street,” with drawn windows and an expansion of the backyard as a private recreational space. “You realize how much the design of a house … has the ability to connect with people and how much of that has disappeared,” he said.

Why are people in neighborhoods throughout this great continent of ours, or for that matter the world, not up in arms about this kind of architecture wherever and whenever it is built? It could be that they are, but feel helpless to do anything about it. Architecture has become a powerful cult, having planted roots since 1950 in the cultural establishment in spite of the regrets felt and sometimes even voiced by anybody with a mind. Eventually, the world will undertake an intervention. 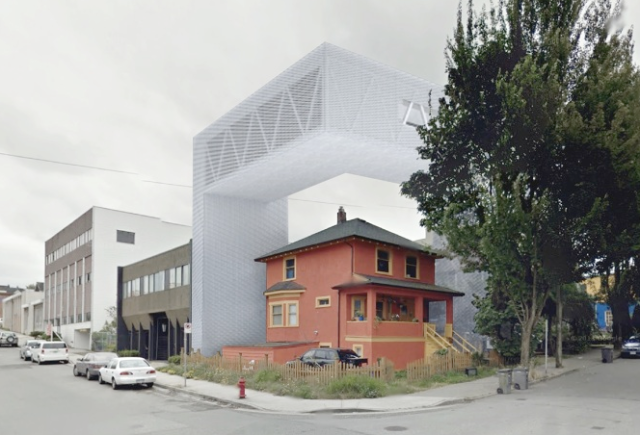 Another proposal, possibly an office, by Tony Robins. (aarobins.com)

This blog was begun in 2009 as a feature of the Providence Journal, where I was on the editorial board and wrote a weekly column of architecture criticism for three decades. Architecture Here and There fights the style wars for classical architecture and against modern architecture, no holds barred. History Press asked me to write and in August 2017 published my first book, "Lost Providence." I am now writing my second book. My freelance writing on architecture and other topics addresses issues of design and culture locally and globally. I am a member of the board of the New England chapter of the Institute of Classical Architecture & Art, which bestowed an Arthur Ross Award on me in 2002. I work from Providence, R.I., where I live with my wife Victoria, my son Billy and our cat Gato. If you would like to employ my writing and editing to improve your work, please email me at my consultancy, dbrussat@gmail.com, or call 401.351.0457. Testimonial: "Your work is so wonderful - you now enter my mind and write what I would have written." - Nikos Salingaros, mathematician at the University of Texas, architectural theorist and author of many books.
View all posts by David Brussat →
This entry was posted in Uncategorized and tagged Modern Architecture, Rem Koolhaas, Residential Architecture, Tony Robins, Vancouver. Bookmark the permalink.

7 Responses to Ugliest house in Vancouver?