The ‘architecture’ of CVS 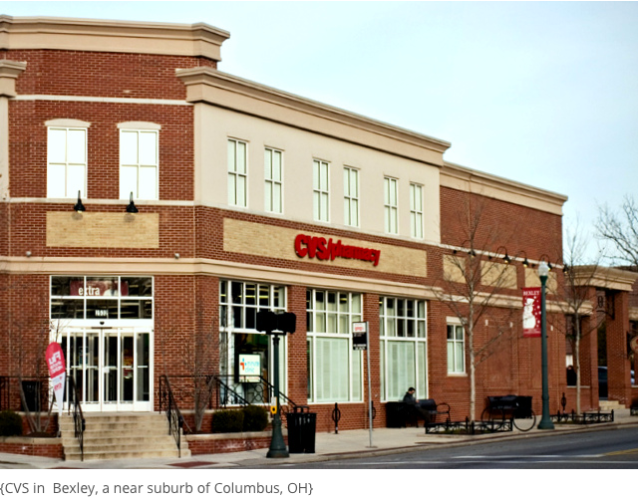 The pace of development drags in West Warwick, R.I., as in many other places, and the allure of a CVS drugstore grows. CVS, whose national headquarters is in Woonsocket, will not, it appears, even give special dispensation to a fellow municipal denizen of the Ocean State. The company insists on the ugliest architecture it can get away with. The Arctic Village Redevelopment Agency was recently turned down flat when it tried to get CVS to offer more embellishments for its proposed store in that community.

On top of this post is a photograph of a decent CVS in Bexley, a suburb of Columbus, Ohio. At the bottom of this post is the CVS designed and pre- approved for Arctic – the one that the AVRA bent over backward to ask kindly for improvements. One sometimes has to resist the temptation to conclude that CVS hates the people and communities that are its meat and potatoes. Else why would it inflict this on them?

“On CVS, Ignorance, and Bad Formula Retail,” by Andrew Faulkner, is from a blog in St. Louis, nextstl.com, that follows CVS and other big-box retail trends. Here is a key passage from Faulkner’s article:

If Arctic, and West Warwick, and any Rhode Island community wants to get some respect from CVS, it is going to have to dig in its heels and demand to be respected. Most other places cannot have their citizens travel to CVS headquarters and make a big stink. But people from Rhode Island can. And most people involved in the development process – private businessmen, government regulators, regular citizens – don’t like being obnoxious. But incivility is certainly getting a leg up this year. If citizens and their elected (and appointed) leaders want to free their communities from the crap that CVS typically offers, they’ll have to grit their teeth and act like jackasses. Otherwise CVS and its ilk will not give them the time of day.

Other communities with guts and moxie have done it. Rhode Islanders have a longer history of in-your-faceness than most other places (remember the Gaspee). Maybe it’s time to consider something along those lines. And perhaps not just in regard to CVS.

Design of CVS proposed for Arctic, in West Warwick, R.I.

This blog was begun in 2009 as a feature of the Providence Journal, where I was on the editorial board and wrote a weekly column of architecture criticism for three decades. Architecture Here and There fights the style wars for classical architecture and against modern architecture, no holds barred. History Press asked me to write and in August 2017 published my first book, "Lost Providence." I am now writing my second book. My freelance writing on architecture and other topics addresses issues of design and culture locally and globally. I am a member of the board of the New England chapter of the Institute of Classical Architecture & Art, which bestowed an Arthur Ross Award on me in 2002. I work from Providence, R.I., where I live with my wife Victoria, my son Billy and our cat Gato. If you would like to employ my writing and editing to improve your work, please email me at my consultancy, dbrussat@gmail.com, or call 401.351.0457. Testimonial: "Your work is so wonderful - you now enter my mind and write what I would have written." - Nikos Salingaros, mathematician at the University of Texas, architectural theorist and author of many books.
View all posts by David Brussat →
This entry was posted in Architecture, Rhode Island and tagged Andrew Faulkner, Arctic, Arctic Village Redevelopment Agency, CVS, nextstl.com, West Warwick RI, Woonsocket RI. Bookmark the permalink.

8 Responses to The ‘architecture’ of CVS