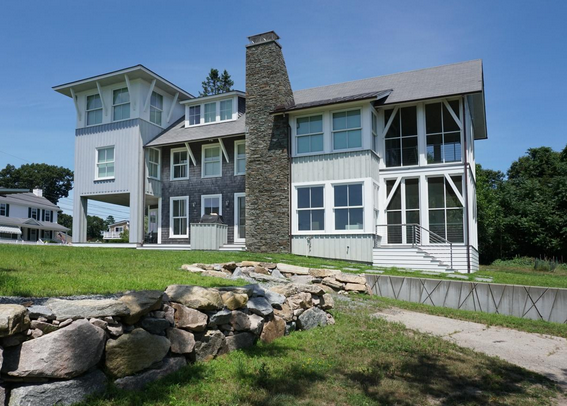 On Saturdays, when the “House of the Week” beckons in the Providence Journal, my wife and I guess its asking price. Victoria is usually closer. This week, the house at 346 Claypool Dr., an appealing traditional house built in 2007 overlooking Greenwich Bay in Warwick, greets us from the front page of the Homes tabloid section of the Journal.

While I wait for Victoria to take her swing – I am guessing $799,000 – let me pick a bone with the paper’s headline writers. They take every opportunity they can to suggest that a house is “contemporary” or “modern,” in this case “Strikingly modern.” Now, let me congratulate them for using the word modern properly, albeit probably by accident. (The online version uses the word “contemporary” in its headline.)

“Modern” means up to date. Any house with plumbing, electricity, heating and cooling systems that meet current standards is a modern house, whether it looks traditional or modernist. I’d bet that every House of the Week since the feature was founded years and years ago has been, in that sense, modern.

“Contemporary” means built in the recent past. In practice, however, it is frequently used to suggest that a house is … well, modern(ist), or at any rate not traditional, though very often, as here, it is traditional. In architecture, modernist is the opposite of traditional. It is easy to tell which is which.

If the owner, who hired architect Peter Twombly to design it for him, thought he was getting a “contemporary New England cottage,” he had better look more closely. It has a very few modernist tics – a Corbusier-style nautical stair rail in the rear, for example – and its furniture and furnishings lean toward the modernist. Still, its exterior is very much that of a traditional house, and quite nice.

Maybe I am being a fussbudget for even bringing this up. Maybe I am too much a stickler for using words as they are traditionally used. Language changes, and since “Realtors” (as reporters are instructed to call real-estate agents) don’t think “modernist” is a word that sells very many houses, I expect to see modern and contemporary slightly twisted to make more houses seem about as hip as the headline writers want to be themselves.

(Victoria just now guessed $700,000, below her usual acuity and more than a million below the actual asking price.) 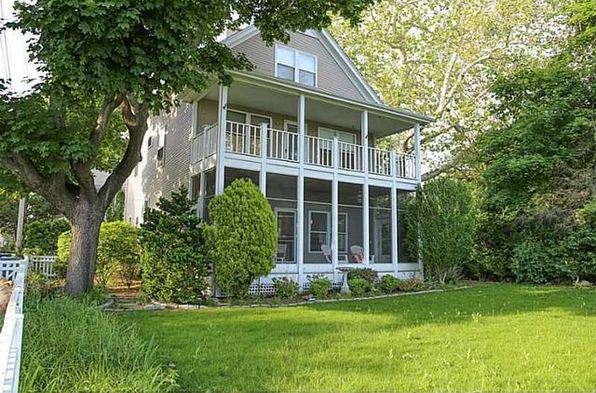 334 Claypool Dr., where the owner of 346 Claypool lived before he built it.

This blog was begun in 2009 as a feature of the Providence Journal, where I was on the editorial board and wrote a weekly column of architecture criticism for three decades. Architecture Here and There fights the style wars for classical architecture and against modern architecture, no holds barred. History Press asked me to write and in August 2017 published my first book, "Lost Providence." I am now writing my second book. My freelance writing on architecture and other topics addresses issues of design and culture locally and globally. I am a member of the board of the New England chapter of the Institute of Classical Architecture & Art, which bestowed an Arthur Ross Award on me in 2002. I work from Providence, R.I., where I live with my wife Victoria, my son Billy and our cat Gato. If you would like to employ my writing and editing to improve your work, please email me at my consultancy, dbrussat@gmail.com, or call 401.351.0457. Testimonial: "Your work is so wonderful - you now enter my mind and write what I would have written." - Nikos Salingaros, mathematician at the University of Texas, architectural theorist and author of many books.
View all posts by David Brussat →
This entry was posted in Architecture and tagged 346 Claypool Dr., Contemporary, Cottage, House of the Week, Language, Le Corbusier, Modern, Modernist, Providence Journal, Realtors. Bookmark the permalink.