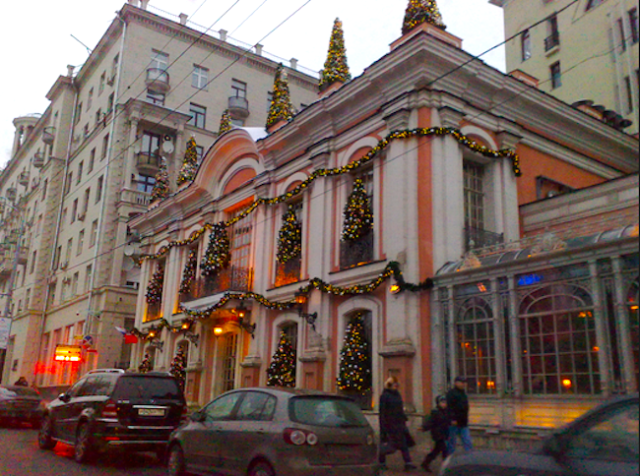 No doubt inspired by photographs of mahogany antiques crammed with romantic abandon into a lovely building in downtown Providence (see my post “Tilden-Thurber memories“), Malcolm Millais, author of Exploding the Myths of Modern Architecture, has sent me a tale, in Portuguese, on Café Pushkin, in Moscow. Here is the text, translated into English via Google:

For over 50 years, the legendary French singer Gilbert Bécaud visited Moscow. When he returned to Paris after one visit, he wrote the song “Natalie” and dedicated it to his Russian guide.

The song says something like, “We walked around Moscow, visiting Red Square, and you say to me that you learn things about Lenin and the revolution, but I just wish we were at the Café Pushkin, looking at the snow outside, drinking hot chocolate and talking about something completely different … ”

The song became incredibly popular in France and all French tourists who came to Moscow tried to find the famous “Café Pushkin.” But they never found it since it exists only as a poetic fantasy in Bécaud’s song.

But in 1999, his poetic fantasy became reality when Russian artist and restaurateur Franco Andrei Dellos and chef Andrei Makhov opened the Café Pushkin in a historic baroque mansion on Tverskoy Street.

And the most fantastic part of this story?

Bécaud, the French singer who inspired it all, sang “Natalie” at the opening of the restaurant.

But now marvel at the interior and all the details of this absolutely fantastic breakfast restaurant.

[An article in 2011 announced a Café Pushkin scheduled for New York City, though Time Out reported the “oligarch theme park” had closed in 2012.] 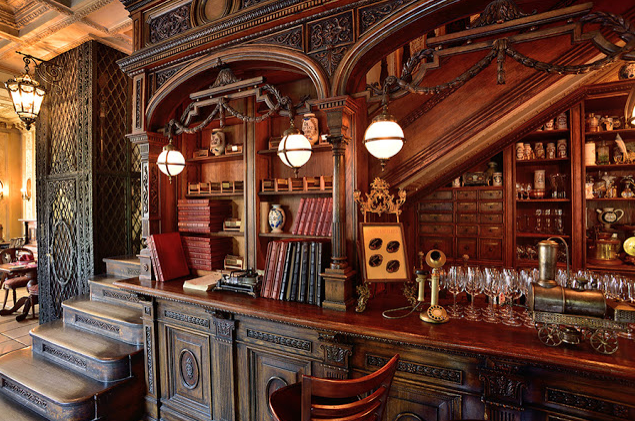 This blog was begun in 2009 as a feature of the Providence Journal, where I was on the editorial board and wrote a weekly column of architecture criticism for three decades. Architecture Here and There fights the style wars for classical architecture and against modern architecture, no holds barred. History Press asked me to write and in August 2017 published my first book, "Lost Providence." I am now writing my second book. My freelance writing on architecture and other topics addresses issues of design and culture locally and globally. I am a member of the board of the New England chapter of the Institute of Classical Architecture & Art, which bestowed an Arthur Ross Award on me in 2002. I work from Providence, R.I., where I live with my wife Victoria, my son Billy and our cat Gato. If you would like to employ my writing and editing to improve your work, please email me at my consultancy, dbrussat@gmail.com, or call 401.351.0457. Testimonial: "Your work is so wonderful - you now enter my mind and write what I would have written." - Nikos Salingaros, mathematician at the University of Texas, architectural theorist and author of many books.
View all posts by David Brussat →
This entry was posted in Architecture, Architecture History, Art and design, Books and Culture, Interior Design, Other countries, Preservation, Uncategorized, Urbanism and planning and tagged Andrei Makhov, Cafe Pushkin, Cuisine, Exploding the Myths of Modern Architecture, Fantasy, Franco Andrei Dellos, Gilbert Becaud, Malcolm Millais, Moscow, Natalie, Portuguese, Restaurants, Romance. Bookmark the permalink.