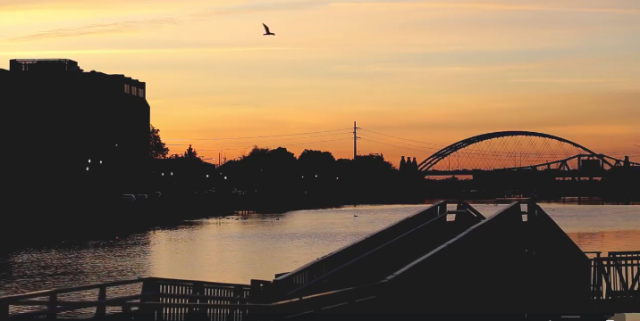 Grow Smart Rhode Island has produced a short video, “PVD: Personality. Vitality. Distinction,” about the charms of the Ocean State’s capital city. It begins looking downriver along the Providence from an abandoned water taxi stop near the new Crawford Street Bridge. In the foreground the ramp’s peak is backgrounded by the hump of the Point Street Bridge and the arch of the William D. Warner Memorial Bridge (what the Iway bridge should be named). The scene, with gull awing, is awash in a pink sunset.

This sort of lovely cinematography bathes the film in a glow that epitomizes the beauty that is a large part of what makes Rhode Island and its capital so attractive. Providence’s architectural heritage plays a major role in the film. It was upon this heritage that the late Bill Warner erected the design of the waterfront, key to the many “best city” awards Providence has won in recent years. (The list in the video only cracks the surface.) Urbanist Richard Florida has said that cities with character are places where the young and the hip (“Millennials”) want to be, where the old and established (“Perennials”) can find joy in what the young and hip have brought to town. Providence’s status as a mecca for the tech-savvy is amply illustrated in the video.

Yes, the GTECH building is caught looming up, threatening all that makes Providence lovable, but then it goes away. Joy and beauty return.

The claim that Providence has never been more alive can be debated, but only by historians. It is certainly alive today, with ample room for growth. How WaterFire, the city’s signature artistic triumph, was omitted beggars the imagination – the shot of a gondola may be an allusion to the waterfront festival every two weeks or so from spring into fall. Still, the city’s edgy artistic life takes center stage nevertheless.

This is not your father’s civic promo. An oddly downcast voice narrates the film, reciting its story in a poetic tenor that comes off surprisingly upbeat in a way that the more knowing will understand. The video is a good example of film noir as the cinema of happiness. There is a lot of grit in the video, but it does nothing to soil the optimism that it portrays. The people in the film have faces that are wreathed in pleasure.

Consciously or unconsciously, the videographer focused on how Providence’s historic architecture is at the heart of its vital character. With that one exception of the alien GTECH, most of the backdrops spread old buildings before our eyes. With no attempt to pretty them up for the camera, they make an important point with aesthetic force. Bill Warner understood that to perfection when he designed a new waterfront styled to help the city ride into its future saddled on the loveliness of its past.

That is why the city and state should rethink the designs proposed for the area to be revitalized in the wake of the relocation of Route 195. That, too, was the work, largely, of Bill Warner. If the new section of town is decked out in glass boxes with faux creative swirls, an opportunity to build on the city’s strengths will have been lost. But if “personality, vitality and distinction” are truly PVD, a more beautiful and forward-looking plan will prevail.

Grow Smart Rhode Island deserves applause for expressing in a mere three minutes a profound understanding of Providence – how its past, intelligently reinterpreted, can be the animating force of its future. Thus only can it keep its status as a unique city and avoid sliding into the all-too-typical sterile miasmic parody of the city in Ridley Scott’s Blade Runner. 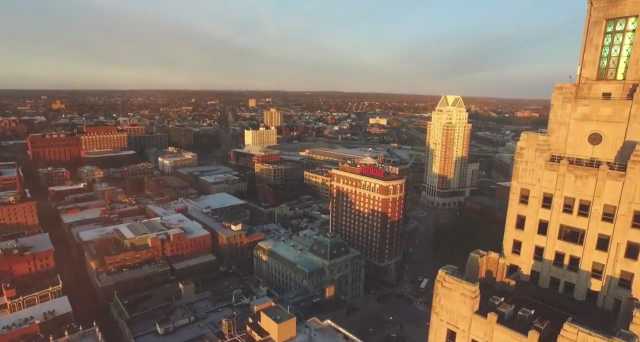 This blog was begun in 2009 as a feature of the Providence Journal, where I was on the editorial board and wrote a weekly column of architecture criticism for three decades. Architecture Here and There fights the style wars for classical architecture and against modern architecture, no holds barred. History Press asked me to write and in August 2017 published my first book, "Lost Providence." I am now writing my second book. My freelance writing on architecture and other topics addresses issues of design and culture locally and globally. I am a member of the board of the New England chapter of the Institute of Classical Architecture & Art, which bestowed an Arthur Ross Award on me in 2002. I work from Providence, R.I., where I live with my wife Victoria, my son Billy and our cat Gato. If you would like to employ my writing and editing to improve your work, please email me at my consultancy, dbrussat@gmail.com, or call 401.351.0457. Testimonial: "Your work is so wonderful - you now enter my mind and write what I would have written." - Nikos Salingaros, mathematician at the University of Texas, architectural theorist and author of many books.
View all posts by David Brussat →
This entry was posted in Architects, Architecture, Architecture History, Art and design, Development, I-195 Redevelopment District, Providence, Rhode Island, Urbanism and planning, Video and tagged Bill Warner, Branding, GrowSmartRI, Iway Bridge, Providence RI, PVD, Richard Florida, Smart Growth, Urbanism, Video. Bookmark the permalink.