Craco, Italy, abandoned in 1963 after a landslide. (thefamilycoppolaresorts.com)

This haunting film depicts Craco, Italy, abandoned in 1963 after landslides rendered it uninhabitable. Ancient ruins are, well, ancient ruins, and their mysteries pull on different chords of our hearts. Craco is a city – granted, an ancient one – abandoned in modern times. Time has and has not been kind to Craco. Its citizens were doubtless the last of generations in their line to inhabit the village. Their reluctance to play Russian roulette with nature is understandable. Filmmakers have found the village’s potential as a site for films irresistable. The Nymph, by Lina Wertmüller (1996), was filmed there along with others of more ecclesiastical bent. But to return to Craco for an hour reduces considerably the tragical odds, and one can only wonder how many of the tourists who visit once had homes in this sadly beautiful alluring village. Wallow in whatever feelings wash over you as you watch Walter Molfese’s 3½-minute film “Craco: The Abandoned Town,” on the Kuriositas website. In 2010 Craco became the 93rd place on the World Monuments Fund’s list of cities and towns to be saved. 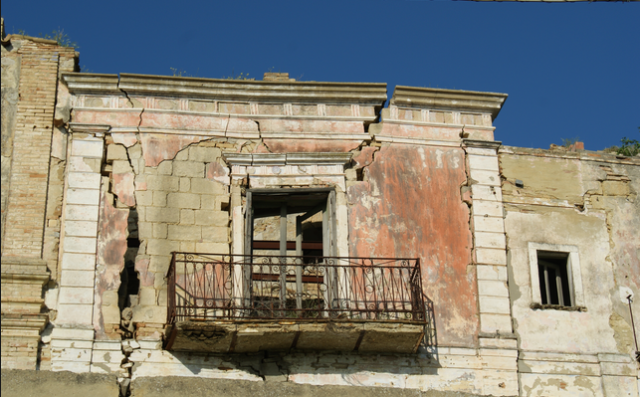 This blog was begun in 2009 as a feature of the Providence Journal, where I was on the editorial board and wrote a weekly column of architecture criticism for three decades. Architecture Here and There fights the style wars for classical architecture and against modern architecture, no holds barred. History Press asked me to write and in August 2017 published my first book, "Lost Providence." I am now writing my second book. My freelance writing on architecture and other topics addresses issues of design and culture locally and globally. I am a member of the board of the New England chapter of the Institute of Classical Architecture & Art, which bestowed an Arthur Ross Award on me in 2002. I work from Providence, R.I., where I live with my wife Victoria, my son Billy and our cat Gato. If you would like to employ my writing and editing to improve your work, please email me at my consultancy, dbrussat@gmail.com, or call 401.351.0457. Testimonial: "Your work is so wonderful - you now enter my mind and write what I would have written." - Nikos Salingaros, mathematician at the University of Texas, architectural theorist and author of many books.
View all posts by David Brussat →
This entry was posted in Architecture, Architecture History, Art and design, Landscape Architecture, Preservation, Urbanism and planning, Video and tagged Craco, Craco: The Abandoned Town, Italy, Kuriositas, Landslides, Lina Wertmuller, Natural Disasters, The Nymph, Tourism, Walter Molfese, World Monuments Fund. Bookmark the permalink.