Posted on September 8, 2015 by David Brussat

These photos are from postcards of Mont Saint-Michel, in France.

On my bucket list is a visit to Mont Saint-Michel, a monestary surrounded by a village on an island just over half a mile off the coast of Lower Normandy, in France. It originated as a fort in ancient times before the first abbey was built in the 8th century. From its Romanesque heights, the architecture steps down the mount by degrees, with God ensconced on the top, the great halls below, then storage and housing within the walls, then housing for farmers and fishermen outside the walls.

Very feudal. When the tide is out it you can get to it only by causeway. When the tide comes in … well, look at the high-tide shot below. Stupendous!

Recently the French government dammed the nearby river, the Couesnon, and built a new bridge out to the island that opened this year. It is not execrable, thankfully. What impact it has on the romantic movement of the tides, I do not know. Fortunately, the photos above and below were taken long before the inevitable governmental tinkering. From the automobiles in the second picture, below, it looks as if the photos were taken in about 1935, and then turned into postcards.

They were acquired by the parents of my old school chum John Bernot, an engineer in Washington, D.C., who inherited them. He gave them to my friend Stevenson Hugh Mields and asked Steve to send them to me.

Receiving them, and seeing in their beauty a mandate to put them onto my blog, partly to please my readers and partly as homage to John’s parents, a problem arose. Time had curved the postcards, and my camera, which is too sophisticated for someone like me, could not take pictures of them because, sharp as they are, the camera perceives everything that is not as sharp as reality as blurry. I don’t know how to get around that. So I made a video of them, with the camera moving from one picture to the next, then uploaded it to my iPhoto library, ran the video, and finally took screen shots of them in turn. It worked!

So, please, as you whisper prayers of thanks to a couple, now deceased, who passed these along to their youngest son, enjoy one of the most beautiful spots on the Earth. 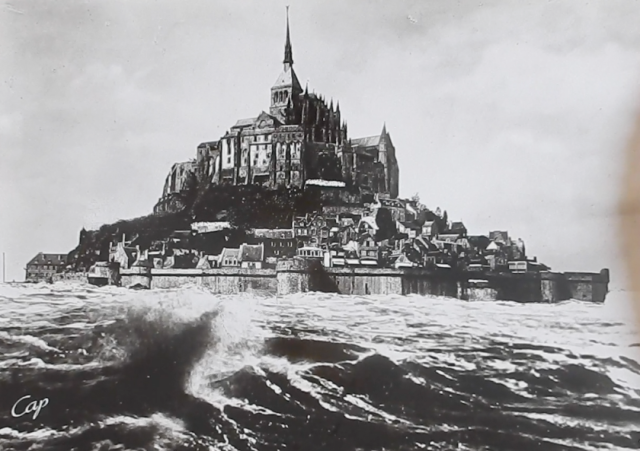 This blog was begun in 2009 as a feature of the Providence Journal, where I was on the editorial board and wrote a weekly column of architecture criticism for three decades. Architecture Here and There fights the style wars for classical architecture and against modern architecture, no holds barred. History Press asked me to write and in August 2017 published my first book, "Lost Providence." I am now writing my second book. My freelance writing on architecture and other topics addresses issues of design and culture locally and globally. I am a member of the board of the New England chapter of the Institute of Classical Architecture & Art, which bestowed an Arthur Ross Award on me in 2002. I work from Providence, R.I., where I live with my wife Victoria, my son Billy and our cat Gato. If you would like to employ my writing and editing to improve your work, please email me at my consultancy, dbrussat@gmail.com, or call 401.351.0457. Testimonial: "Your work is so wonderful - you now enter my mind and write what I would have written." - Nikos Salingaros, mathematician at the University of Texas, architectural theorist and author of many books.
View all posts by David Brussat →
This entry was posted in Architecture, Architecture History, Art and design, Books and Culture, Landscape Architecture, Other countries, Photography and tagged Feudalism, France, John Bernot, Mont Saint-Michel, Normandy, photography, Romanesque, Screenshot, Stevenson Hugh Mields, Video. Bookmark the permalink.

3 Responses to Mont Saint-Michel of old