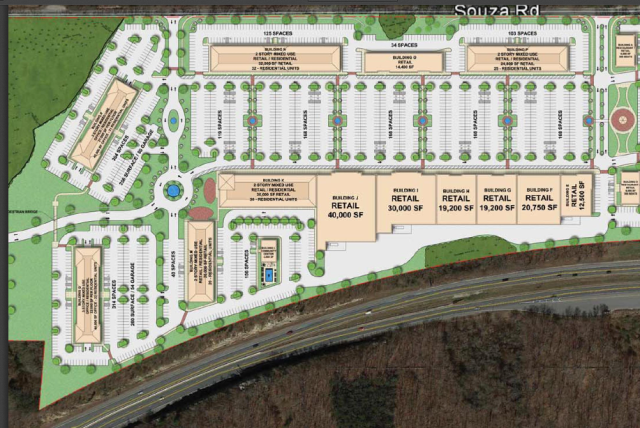 A very large retail and residential development proposed for Tiverton by the Carpionato Group has advanced through several stages of town review and approval without, so far as I can find online, any indication of what the place would look like. The Journal’s story today, “Big crowd, fiery debate on big development proposal in Tiverton,” had no pictures of the plan, once called Tiverton Crossings and now called Tiverton Glen. But the story suggests that trying to pull a fast one on the citizens of Tiverton is unlikely to succeed.

Carpionato is capable of pleasant enough design packages. Its proposal for a development on the east bank of the Providence River, part of the Route 195 corridor, was beautiful, but it has stalled since the 195 commission sold to a rival developer one of the parcels Carpionato had planned to build on. As for the firm’s signature development, Chapel View on Route 2 in Cranston, its renovation of old buildings of the former state Training School, including the chapel for its juvenile delinquents, was fine, but the overall project is marred by the mediocre quality of new buildings between the old ones.

Carpionato has allowed several projects to fall through, including hotels in Providence on the triangular land at the northeast corner of Burnside Park/Kennedy Plaza, and on land cleared by razing the old Produce Terminal across Route 95 from Providence Place.

What seems clear is that Carpionato lacks the developmental drive to bull its way through local opposition. That should be encouraging to citizens of Tiverton who oppose the firm’s proposal there.

Even if the project Carpionato intends for Tiverton were elegant enough to please Prince Charles, it would be a hard sell in Tiverton, a very low-key, bucolic community. The project is just too big.

Here is a presentation by Carpionato, somewhat confusing as to whether it includes any attempt to illustrate what Tiverton Glen might look like, but generally illustrative of the firm’s aesthetic tastes, which range from excellent to execrable. The apparent absence of architectural renderings for Tiverton Glen on the firm’s or the town planning board’s websites at this stage of the project should certainly raise eyebrows.

Economic development is where the rubber hits the road in a democracy – where voting most directly reflects the interests and the sentiments of citizens. People buy houses and pay property taxes in Tiverton because they like it. They have a right to crank up the drawbridge and keep it that way.

Of course, Carpionato and its supporters in Tiverton have an equal right to argue that the new revenue represented by the proposed development would be worth the erosion of the town’s ambiance, its quality of life. If they can persuade enough Tivertonians of this, then Tiverton is likely to feel the winds of change, like almost every other place.

However, the planners, the council members and the developers do not have a right to trample on the town’s comprehensive plan, which is also a product of its voters and reflects their idea of the paradise they call Tiverton. They have every right to be angry if they conclude that officials are trying to facilitate a Carpionato effort to get around the principles embodied in the comprehensive plan.

My next blog will be about Davy Crockett, the frontiersman from Tennessee who had an especially evocative vocabulary according to The Adventure of English, by Melvyn Bragg. Citizens of Tiverton might find words invented and popularized by the King of the Wild Frontier useful to deploy as the Carpionato project rolls merrily along.

This blog was begun in 2009 as a feature of the Providence Journal, where I was on the editorial board and wrote a weekly column of architecture criticism for three decades. Architecture Here and There fights the style wars for classical architecture and against modern architecture, no holds barred. History Press asked me to write and in August 2017 published my first book, "Lost Providence." I am now writing my second book. My freelance writing on architecture and other topics addresses issues of design and culture locally and globally. I am a member of the board of the New England chapter of the Institute of Classical Architecture & Art, which bestowed an Arthur Ross Award on me in 2002. I work from Providence, R.I., where I live with my wife Victoria, my son Billy and our cat Gato. If you would like to employ my writing and editing to improve your work, please email me at my consultancy, dbrussat@gmail.com, or call 401.351.0457. Testimonial: "Your work is so wonderful - you now enter my mind and write what I would have written." - Nikos Salingaros, mathematician at the University of Texas, architectural theorist and author of many books.
View all posts by David Brussat →
This entry was posted in Architecture, Art and design, Development, Preservation, Rhode Island, Urbanism and planning and tagged Carpionato Group, Comprehensive Plan, RI, Tiverton, Tiverton Glen, Town Planning. Bookmark the permalink.

4 Responses to Let Tiverton be Tiverton