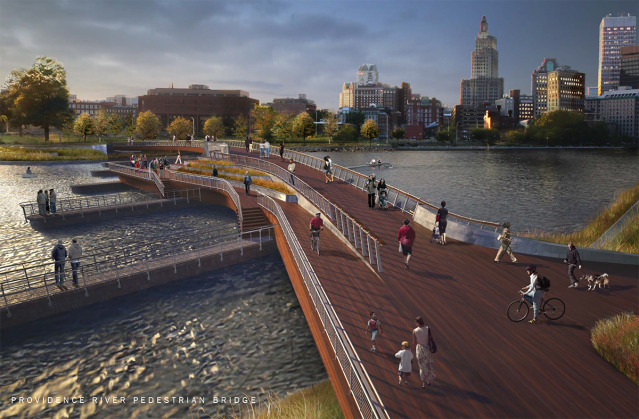 Ah, the pedestrian bridge! Its dubious fate was never hard to predict. The design was chosen in 2010 after a design competition was held to choose a more suitably “creative” bridge after a plain old beautiful bridge design – based on the Pont des Arts in Paris – was deemed insufficiently edgy for the so-called Creative Capital. Entries that looked like bridges were considered persona non grata for this competition, apparently.

The winner, by Detroit-based inFORM Studio, seemed to be very complicated – sinuous, attractive enough in its goofy way but filled with add-ons that seemed likely to force the design to give way to the second-place winner, designed in part by friends of Mayor (now consgressman) David Cicilline. He had intervened in the process, sponsored the contest and chose the winner – sowing confusion that has now come home to roost.

A bridge restaurant has been jettisoned along with other costly elements, and now the bridge is cheaper, but not as cheap as state transportation officials would prefer. So it is on the chopping block once more. “Given our current funding levels,” agency director Peter Alviti told the Journal, “RIDOT is re-evaluating this project given the availability of funding.” RIDOT has decided (doubtless with input from Gov. Gina Raimondo) to give higher priority to bridges in need of repair.

The pedestrian bridge’s western terminus would put it on land slated for a public park, land now also eyed as a stadium for the Pawtucket Red Sox. To add to the confusion, engineers fear that either end of the bridge could be submerged if water levels rise. RIDOT is now redesigning the bridge 18 inches higher than the original design.

If it is doing that, it should make sure that the riverwalk that has expanded southward over the past decade, along with that on the river’s east bank, has room to duck under the bridge’s western terminus. It goes without saying that the bridge should let boats pass beneath. Furthermore, the rivers need dredging if water traffic – especially during the dozen or so WaterFire events each year – is to remain viable (or, more precisely, resume viability). Maybe that should take priority over the pedestrian bridge, too.

The park itself has also been a study in poor planning. Ugly modernist park features have been proposed. Debates over how far away from its banks you should be able to see the river itself have contributed to the confusion. Any change in the bridge’s height will force changes in the slope of the park. The park was supposed to be done years ago. The bridge was supposed to be the first element completed in the Route 195 right-of-way. Neither feat appears likely. (That’s a good thing, actually, indicating that a handful of job-creating projects – perhaps not excluding a ballpark – may be moving forward.)

However, I’d wager that if the original lovely bridge design by Bill Warner had not been deep-sixed by Cicilline, it would be done by now. Design that exalts creativity, real or imagined, above all else brings added complexity to project engineering and financing – and, I would say, to the public support needed to help officials push expensive projects to completion. (By the way, Warner’s name should grace the Iway bridge that now carries the relocated segment of Route 195 over the Providence River.)

As matters stand, with funds scarce to repair bridges, and with two bridges available for pedestrians to cross up and downriver, we may now be seeing this benighted pedestrian bridge sinking slowly into the sunset. Given its eyebrow-raising conception, it may meet its just fate.

(I wrote of this project in my post “Pedestrian pedestrian bridge,” last Oct. 3.)

This blog was begun in 2009 as a feature of the Providence Journal, where I was on the editorial board and wrote a weekly column of architecture criticism for three decades. Architecture Here and There fights the style wars for classical architecture and against modern architecture, no holds barred. History Press asked me to write and in August 2017 published my first book, "Lost Providence." I am now writing my second book. My freelance writing on architecture and other topics addresses issues of design and culture locally and globally. I am a member of the board of the New England chapter of the Institute of Classical Architecture & Art, which bestowed an Arthur Ross Award on me in 2002. I work from Providence, R.I., where I live with my wife Victoria, my son Billy and our cat Gato. If you would like to employ my writing and editing to improve your work, please email me at my consultancy, dbrussat@gmail.com, or call 401.351.0457. Testimonial: "Your work is so wonderful - you now enter my mind and write what I would have written." - Nikos Salingaros, mathematician at the University of Texas, architectural theorist and author of many books.
View all posts by David Brussat →
This entry was posted in Architects, Architecture, Art and design, Development, Landscape Architecture, Providence, Urbanism and planning and tagged Bill Warner, Bridges, David Cicilline, inFORM Studio, Pedestrian Bridge, Rivers, WaterFire, Waterfronts. Bookmark the permalink.