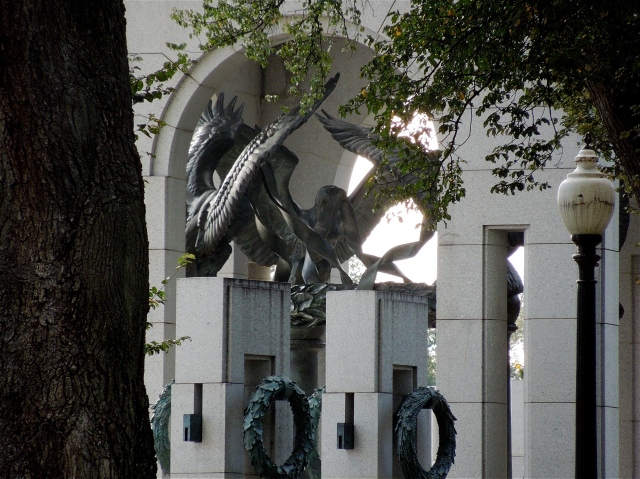 View of the national World War II Memorial from just outside its perimeter. (Photos by David Brussat)

It did not take long for the national World War II Memorial in Washington, designed by Rhode Island architect Friedrich St. Florian, to embed itself as a sacred place in America’s consciousness. 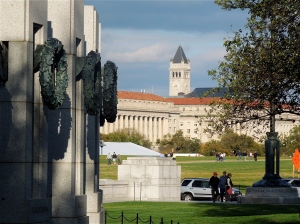 Last year marked its first decade on the Mall. Its placement right on the nation’s front lawn between the Washington Monument and the Lincoln Memorial was controversial, and so was its design – a classical take on the colonnade of St. Peter’s in Rome with contemporary touches that have been criticized, inanely but inevitably, as recalling the grandiosity of the architecture of Hitler’s Nazi Germany.

The subject springs to mind because Friedrich – whom I’ve known since he designed the Providence Place shopping mall in the 1990s – has been invited to address the Rocky Mountain chapter of the Institute of Classical Architecture & Art, in Denver, on June 4. He will speak on the subject of the memorial’s design, whose heterodoxical character fits right into the current debate over what is and what is not classical architecture.

I am quite sure that Friedrich, who was born in Austria and has a gentle lilting accent that makes you want to cuddle up to his thoughts, will not broach that debate. He might discuss the vitriolic public controversy that greeted his design back in the late 1990s and early 2000s, but more in sorrow than in anger.

I recall with some pride my role defending his design as an architectural critic with the Providence Journal.

His original design, back in 1997, offered as part of an open design competition, featured twinned semicircular colonnades of classical fluted columns without base or capital, meant to represent lives cut off in war. The columns were later replaced by rectangular pillars upholding wreaths of oak leaves and wheat spears in bronze hanging on either side of the rectangular aperture in each pillar. Both early and final versions were unorthodox and yet distinctly classical.

The fluted columns and the grand arches anchoring each colonnade were perhaps the design’s most irksome elements to many in the architectural establishment. Some critics accused them of recalling Albert Speer.

Critics who claimed to see Hitler and Speer in the memorial’s design must also, if their absurdity is to at least have a ghost of plausibility, see the two villains in every classical building in Washington, every stripped classical building around the nation. The design is more accurately described by Thomas B. Grooms, of the U.S. General Services Administration, who wrote in a booklet about the memorial:

The architecture is a contemporary interpretation in granite and bronze of the spare Art Deco classicism of the 1930s and 1940s found throughout Washington. It is a memorial evocative of its time.

Although the jury for the competition was suffused with representatives of the architectural establishment, Friedrich’s original proposal was selected unanimously. The program for the competition insisted that respect be paid to the classicism of the Mall and the nation’s capital.

The architect would never say this, and I don’t mean it as damnation by faint praise, far from it, but his design’s victory arose largely from the weakness of its rivals, which mainly seemed to want the memorial to express, above all else and even to the exclusion of all else, a distaste for war. In St. Florian’s design, that distaste was treated as a given.

I recall being dismayed by the decision, made in Washington, to remove the fluted columns, partly because the intermediate ideas for their replacement were so lame. But I was pleased by the final design of the pillars.

At that time, the debate among classicists over what is classicism had not reached the fever pitch it has reached today, largely because of Andres Duany’s treatise – the final books of which are still being written (and whose latest draft I am editing) – on classicism. His treatise seeks to broaden the definition of classicism by including examples from heterodox classicists who were snubbed by the architectural establishment of the late 19th century. These classicists, such as Louis Sullivan, Otto Wagner and Joze Plecnik, were subsequently embraced as “pioneers” or “precursors” of the eventually (and unfortunately) dominant modernism that captured architecture’s establishment in the 1930s and ’40s and has controlled it since.

My goal here is not to recapitulate Duany’s treatise but to consider how Friedrich’s memorial design fits into its precepts. It is undoubtedly heterodoxical, but it doffs its cap with such clear regard to classicism’s Vitruvian canon that, to me, it seems almost the definition of what is needed to expand that canon without undermining it.

I wish I were able to fly out to Denver to attend Friedrich’s speech. I had drinks with him last week at the Eddy in downtown Providence and never got around to asking him what he was going to say. But I’m sure it will be a treat for Rocky Mountain classicists, especially those who are familiar with Friedrich’s compelling design for what has become one of Washington’s most monumental experiences.

This blog was begun in 2009 as a feature of the Providence Journal, where I was on the editorial board and wrote a weekly column of architecture criticism for three decades. Architecture Here and There fights the style wars for classical architecture and against modern architecture, no holds barred. History Press asked me to write and in August 2017 published my first book, "Lost Providence." I am now writing my second book. My freelance writing on architecture and other topics addresses issues of design and culture locally and globally. I am a member of the board of the New England chapter of the Institute of Classical Architecture & Art, which bestowed an Arthur Ross Award on me in 2002. I work from Providence, R.I., where I live with my wife Victoria, my son Billy and our cat Gato. If you would like to employ my writing and editing to improve your work, please email me at my consultancy, dbrussat@gmail.com, or call 401.351.0457. Testimonial: "Your work is so wonderful - you now enter my mind and write what I would have written." - Nikos Salingaros, mathematician at the University of Texas, architectural theorist and author of many books.
View all posts by David Brussat →
This entry was posted in Architecture, Art and design, Landscape Architecture and tagged Albert Speer, Denver, Friedrich St. Florian, Heterodoxy, ICAA, World War II Memorial. Bookmark the permalink.