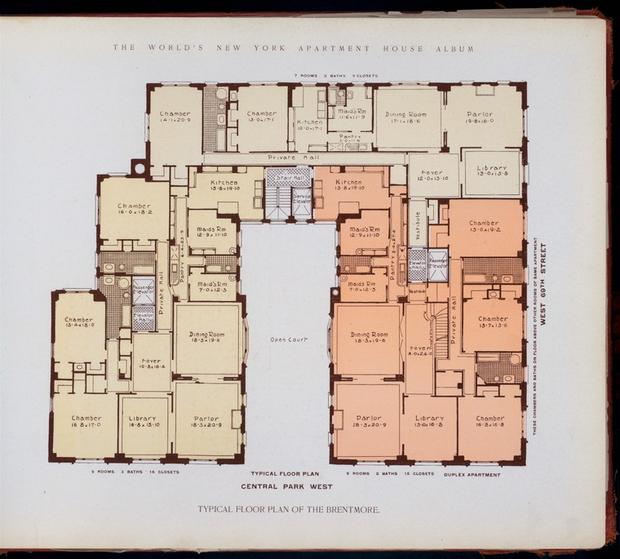 A friend who used to be a big wheel in Providence development circles, Lee Juskalian, keeps tabs through me (and others) on development around here (though he has lived in California for years). Lee, who now travels and surfs, has long moaned and groaned at the timidity those who develop apartment complexes in Providence. He is talking bedrooms – you need to offer more bedrooms if you want people to live downtown, he would say, rolling his eyes (which I could hear over the phone) at the idea of apartments with just two or three BRs.

Well, except that they’re not in Providence, he’d like these places gathered by Hannah Keyser in a piece called “10 Elaborate Floor Plans from Pre-World War I New York City Apartments,” from a website called mentalfloss.com. (Check out the piece on “spite houses” too.) And not just bedrooms, either. No sniffing at these addresses. As they say: Location! Location! Location!

A tip of the hat to Ann Daigle for sending these to TradArch.

This blog was begun in 2009 as a feature of the Providence Journal, where I was on the editorial board and wrote a weekly column of architecture criticism for three decades. Architecture Here and There fights the style wars for classical architecture and against modern architecture, no holds barred. History Press asked me to write and in August 2017 published my first book, "Lost Providence." I am now writing my second book. My freelance writing on architecture and other topics addresses issues of design and culture locally and globally. I am a member of the board of the New England chapter of the Institute of Classical Architecture & Art, which bestowed an Arthur Ross Award on me in 2002. I work from Providence, R.I., where I live with my wife Victoria, my son Billy and our cat Gato. If you would like to employ my writing and editing to improve your work, please email me at my consultancy, dbrussat@gmail.com, or call 401.351.0457. Testimonial: "Your work is so wonderful - you now enter my mind and write what I would have written." - Nikos Salingaros, mathematician at the University of Texas, architectural theorist and author of many books.
View all posts by David Brussat →
This entry was posted in Architecture, Architecture History, Development, Providence, Urbanism and planning and tagged Apartments, Lee Juskalian, New York City, Real Estate. Bookmark the permalink.