The architecture of dessert 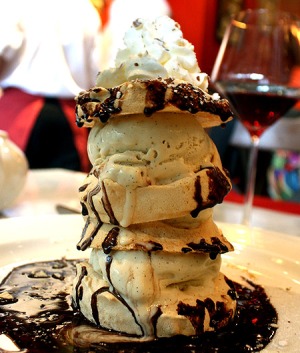 Jello a la past. (thatsnerdalicious.com)

I and those who think like me often pause to wonder how lovely life and the world would be if modern architects had taken up another line of work. For example, would that more of them had gone beyond merely dipping their toes in furniture design, for which dabble of interest they owe the gratitude of chiropractors worldwide. Zaha Hadid recently dipped her toes in shoe design, and one wishes she had slid her entire foot in and kept it there. Why have no modern architects tried to make a bigger splash in haute couture, or at least fancy eyeglassware? Architects are known for their spooky threads and kooky spectacles. Designing clothes and designing modern architecture are really two peas in a pod, except that designing clothes is so much less expensive an endeavor – easier to break in and easier to break out. They could have their egos stroked by the fawning media they are used to, even as they lay down fashion benchmarks for an entire industry that provides for the sartorial splendor of the fabulously wealthy. They would still be drooled over by those alongside whom they stroll as they laugh all the way to the bank. Too few modern architects have tried to conquer the runway! None has that I know of. Make my day by sending news that they have. I won’t be holding my breath.

But the the real place for the modern architect is in the kitchen, in particular the dessert kitchen. Here their lust for novelty could thrill a hungry audience without threatening the well-being of the entire world. I went online to find examples of architectural desserts and what I found was wanting. I could barely find a dessert that qualified for skyscraperhood, though I’m sure they are out there; they are not online. There were very few desserts worthy of Frank Gehry. To be sure, there are plenty of desserts that most modernists would spurn, such as the gew-gaw cottages of traditional bakeries or the molded replicas of the work of their betters – confections that bring to mind the term “copying the past.”

But if you Google “architecture of dessert” or “dessert architecture” there are few really great photographs of architectural desserts. Maybe that’s because they were eaten. I offer up this prospect of a new and tasty career for modern architects free of charge. Go for it!

This blog was begun in 2009 as a feature of the Providence Journal, where I was on the editorial board and wrote a weekly column of architecture criticism for three decades. Architecture Here and There fights the style wars for classical architecture and against modern architecture, no holds barred. History Press asked me to write and in August 2017 published my first book, "Lost Providence." I am now writing my second book. My freelance writing on architecture and other topics addresses issues of design and culture locally and globally. I am a member of the board of the New England chapter of the Institute of Classical Architecture & Art, which bestowed an Arthur Ross Award on me in 2002. I work from Providence, R.I., where I live with my wife Victoria, my son Billy and our cat Gato. If you would like to employ my writing and editing to improve your work, please email me at my consultancy, dbrussat@gmail.com, or call 401.351.0457. Testimonial: "Your work is so wonderful - you now enter my mind and write what I would have written." - Nikos Salingaros, mathematician at the University of Texas, architectural theorist and author of many books.
View all posts by David Brussat →
This entry was posted in Architects, Architecture, Art and design, Humor and tagged Baking, Chef, Cuisine, design, Dessert, Eyewear, Fashion, Haute Couture, modernism, Shoes. Bookmark the permalink.

1 Response to The architecture of dessert