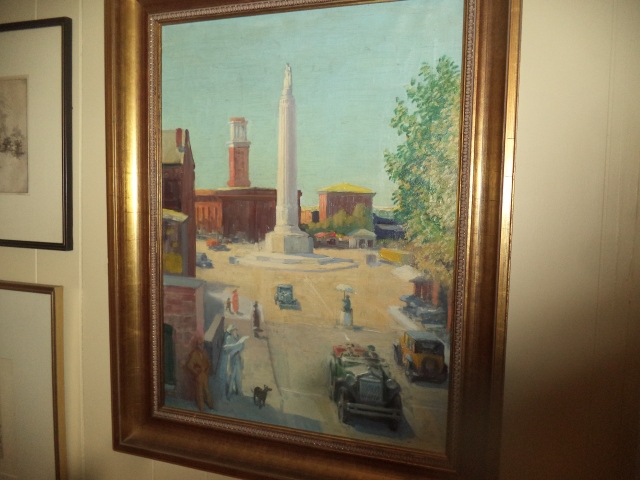 Warren Lutzel has kindly sent me a portrait of architect Paul Philippe Cret’s monument originally erected in 1929 at Providence’s Memorial Square to commemorate World War I. The square looks almost bucolic in the painting above but in time grew congested and came to be known as “Suicide Circle,” with traffic from seven streets feeding into the orbit of Cret’s local icon, barring pedestrians from enjoying his sculptural artistry up close.

The Cret memorial in its current setting. (Photo by David Brussat) 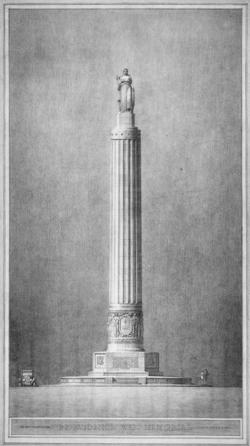 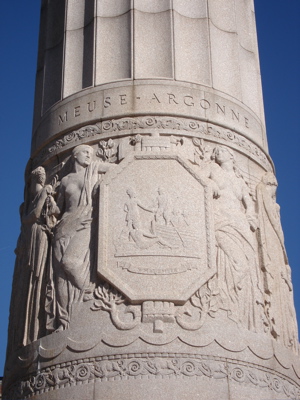 When the Providence River’s channel was moved in the early 1990s from under the nearby Post Office (completed in 1940 after the demise of the towered fire station just left of the monument in the painting), Memorial Square itself was demolished and became the new confluence of the daylighted Moshassuck and Woonasquatucket rivers at the head of the daylighted Providence River. (These had once been the fabled Crawford Street Bridge, at 1,147 feet the widest in the world according to Guinness.) The monument was taken down piece by piece, placed in storage on land belonging, I believe, to the Port of Providence, and in 1996 was rebuilt at the new Memorial Park. There it stands today opposite the Providence County Superior Courthouse, built in 1926-30.

I followed in my column for years the debate over where the monument should be rebuilt. Some thought it should arise near its original location, at the rivers’ confluence where One Citizens Plaza – the Darth Vader Building – was eventually built, blocking views of the State House from downriver. Others thought it should go up at the base of State House Lawn, but that would have placed it far closer to Providence Place than to the State House, across Francis Street from what should have been the northern entrance to the mall – arguably a location of insufficient dignity. When the location at what was to be Memorial Park was finally selected, a brouhaha arose over its displacement of a small memorial of stacked tablets dedicated to Italian explorer Giovanni da Verrazzano, who discovered Narragansett Bay in 1524.

The old location at Memorial Square had its charms, especially as part of the view from in front of Union Station to the east up College Hill. Cret’s monument added to the panoply of steeples and cupolas visible from there. It was a glorious collection of architectural phalluses, now slightly reduced but still glorious. I argued in my column that, with its height and grandeur, the monument in its new location would fully engage the urban room around it – the courthouse’s colonnade facing the crescendo of downtown’s towers and the south façade of the RISD Auditorium facing the façade of Edward Larrabee Barnes’s Old Stone Square (1985), which for all its flaws does undeniably form a wall. Time has proved Memorial Park to be the proper location for the monument.

The perspective in the painting leaves something to be desired. At first I thought the man reading the newspaper was a statue. I like the lady with the umbrella strolling heedlessly through what she had no reason to suspect would be called Suicide Circle. I think the object most lovingly rendered by the artist (whose name I don’t know at this writing) is the green convertible. On second thought, could the woman with the brelly actually be a traffic cop on his pedestal? Can’t really tell. Let me pause to click and enlarge.

[Pause … ] Actually it is a traffic cop in a kiosk with an umbrella. Indeed, if it were a woman her hoop skirt would have been more than slightly out of fashion, even back then.

What a delightful mixture of memory and contemplation has been aroused by Warren’s photo of that painting!

This blog was begun in 2009 as a feature of the Providence Journal, where I was on the editorial board and wrote a weekly column of architecture criticism for three decades. Architecture Here and There fights the style wars for classical architecture and against modern architecture, no holds barred. History Press asked me to write and in August 2017 published my first book, "Lost Providence." I am now writing my second book. My freelance writing on architecture and other topics addresses issues of design and culture locally and globally. I am a member of the board of the New England chapter of the Institute of Classical Architecture & Art, which bestowed an Arthur Ross Award on me in 2002. I work from Providence, R.I., where I live with my wife Victoria, my son Billy and our cat Gato. If you would like to employ my writing and editing to improve your work, please email me at my consultancy, dbrussat@gmail.com, or call 401.351.0457. Testimonial: "Your work is so wonderful - you now enter my mind and write what I would have written." - Nikos Salingaros, mathematician at the University of Texas, architectural theorist and author of many books.
View all posts by David Brussat →
This entry was posted in Architecture, Architecture History, Art and design, Landscape Architecture, Providence, Urbanism and planning and tagged Memorial Park, Paul Philippe Cret, Warren Lutzel, World War I Memorial. Bookmark the permalink.