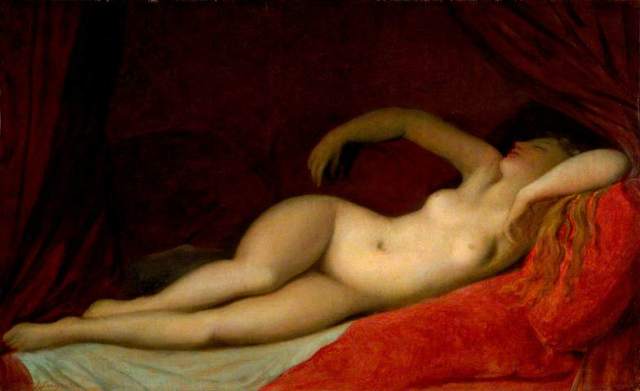 “The Sleeping Odalique,” by Jean-Auguste-Dominique Ingres.

Above is my promised second reclining nude by Ingres, “The Sleeping Odalisque,” to be delivered after responses to my post “Naked proportion.”

In the nick of time comes an intellectual debate in Paper Magazine, an online journal at Vice.com, which has published an essay by Eleanor Morgan called “Getting to the Bottom of Kim Kardasian’s Alien Appeal.” It discusses what the headline suggests, but it is really about the celebrity’s ample bottom line. “Is it real or is it Memorex,” I asked a friend, who voiced an understandable skepticism at my bringing the subject up. But since this thread of posts discusses the subject of proportion in architecture, I have decided to post the photo of Kardashian in order to riff on Roger Scruton’s main (architectural) point that beauty is really less a matter of proportion than of the detail of the architecture in question. A beautiful building achieves that status not because it obeys an arithmetical ideal but because its aesthetic features trigger a positive response in the observer.

That reasoning may sound hopelessly circular; I trust readers will be more titillated (intellectually) than offended. This is, after all, a family-oriented architectural blog. I promise, however, that reader response will not trigger yet another nude, reclining or otherwise, except for the reclining male nude below, offered in a spirit of fairness and diversity.

This blog was begun in 2009 as a feature of the Providence Journal, where I was on the editorial board and wrote a weekly column of architecture criticism for three decades. Architecture Here and There fights the style wars for classical architecture and against modern architecture, no holds barred. History Press asked me to write and in August 2017 published my first book, "Lost Providence." I am now writing my second book. My freelance writing on architecture and other topics addresses issues of design and culture locally and globally. I am a member of the board of the New England chapter of the Institute of Classical Architecture & Art, which bestowed an Arthur Ross Award on me in 2002. I work from Providence, R.I., where I live with my wife Victoria, my son Billy and our cat Gato. If you would like to employ my writing and editing to improve your work, please email me at my consultancy, dbrussat@gmail.com, or call 401.351.0457. Testimonial: "Your work is so wonderful - you now enter my mind and write what I would have written." - Nikos Salingaros, mathematician at the University of Texas, architectural theorist and author of many books.
View all posts by David Brussat →
This entry was posted in Architecture, Art and design, Development, Humor and tagged Ingres, Kim Karashian, Nude, Painting, Proportion, Roger Scruton. Bookmark the permalink.

2 Responses to Disproportion by definition