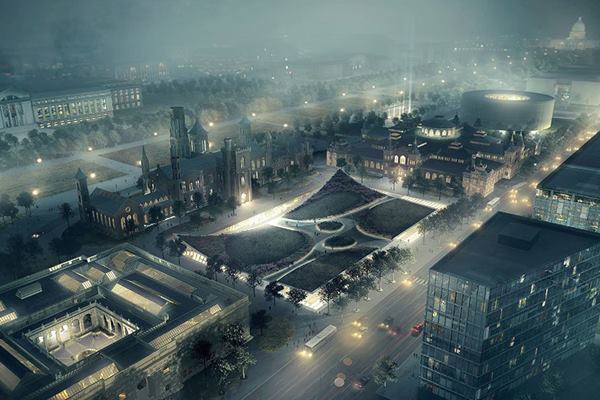 Master plan for southern end of Mall and Smithsonian. (BIG/Smithsonian)

The National Mall in Washington has been undergoing renovation of its famous grass and the soil underneath. Decades of marches, concerts and festivals, not to mention the constant tramp, tramp, tramp of millions of tourists yearly on this hallowed ground of the nation, still largely based on the great classical McMillan Plan of 1901, have hardened and compressed the land. But with a sort of fluffing up of the large part of the Mall that lies under the grass, this is being fixed. 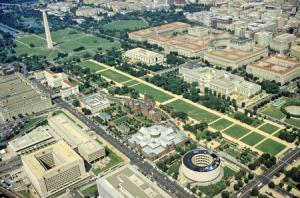 Fixed, it seems, to prepare the ground for an invasion by alien forms, invited not by some malign foreign power or interplanetary congress of villains but by the Smithsonian Institution itself. The Smithsonian’s museums, galleries and quaint headquarters building line either side of the Mall from the Washington Monument to the U.S. Capitol. A Danish firm based in New York, Bjarke Ingels Group, has been hired to produce a master plan for its older, southern portion over the next 20 years. At the top of this post is a disarmingly charming nighttime illustration of the plan.

Aaron Betsky praises the BIG plan for Architect, the journal of the American Institute of Architects, in “The Underground Museum Movement.” An early line well describes the work of BIG’s Bjarke Ingels, who has “married OMA’s [Rem Koolhaas’s] unabashed modernism with sculptural daring-do and a cartoon sensibility.”

The Mall and its interlace of spaces linking the country’s greatest national museums will indeed become a cartoon – a Jetsons cartoon – if this plan is carried out. The grand allée of America is our greatest public space. It has hosted many of U.S. history’s finest moments,  such as Martin Luther King Jr.’s “I Have a Dream” speech. On a day-to-day basis it offers Washington’s visitors, workers and residents alike a pedestrian paradise where flâneurs can sit or stroll as they observe the country’s character and characters tromp by in all their diversity.

Under the BIG plan, the Mall’s grandeur will be lampooned and its essential purpose as a promenade of democracy on which to meet and greet under the blue sky will be trampled. Much of the plan imagines new spaces and connections between museums underground, itself undermining the Mall’s essence. The recent new visitors center, largely underground, for the Capitol offers plenty of reason to avoid digging down to solve an entirely imaginary need for more space for people on the mall. The Mall may need an upgrade; it does not need a reconceptualization, a repurposing, a re-anything.

You’d think that going below grade would help avoid one of the predictable hazards of remaining above grade. But no. BIG sees a lot of modern architecture raising its ugly head above ground, up from below. From illustrations provided by BIG and the Smithsonian, most of it is predictable sterile modernist extrusions from another galaxy. The main piece, and potentially least objectionable, is a lawn with cutely raised corners between the Smithsonian administration’s towered, crenellated castle and the round Hirshorn Art Museum.

Had the structures gently lifting the corners of the lawn featured traditional architecture rising from below, teasing visitors with elements of the Mall’s greatest classical buildings, this centerpiece might have mixed beauty and frisson with admirable panache, acceptable to all. But BIG could see no farther than to gild the turd, and so even this mini-mall will cringe along with the rest of the plan’s benighted architecture.

Bad modern architecture has been creeping up and down the Mall for decades. It has been chosen to house the latest national museums. The beauty that once reigned supreme as the nation filled out the McMillan Plan in the first half of the 20th century will suffer further erosion. The conversation among the most civilized structures will be further confused. While the Mall is unlikely to lose its status as the nation’s gathering spot, its sense of place and hence its ability to wreathe the civic life of the capital city in an uplifting grandeur and importance will continue to be diminished.

Corner of lawn viewed between Smithsonian HQ and Hall of Arts and Industries. (Smithsonian)

This plan is not BIG but small, very small, very orthodox, very ugly. Fortunately, in a nation of stretched budgets the plan will depend on big donations from the private sector, and we may hope that these do not materialize. Maybe the Smithsonian will be thrown back on its existing resources. Chief among these is the newly renovated Hall of Arts and Industries, which now stands empty, a waste waiting to embrace a new mission. It is well placed to lead the repulse of this ridiculous alien invasion proposed for America’s most sacred space.

But a building cannot lead a fight, and the Smithsonian cannot be expected to fight against itself. So this looks like a job for Justin Shubow and the National Civic Art Society.

This blog was begun in 2009 as a feature of the Providence Journal, where I was on the editorial board and wrote a weekly column of architecture criticism for three decades. Architecture Here and There fights the style wars for classical architecture and against modern architecture, no holds barred. History Press asked me to write and in August 2017 published my first book, "Lost Providence." I am now writing my second book. My freelance writing on architecture and other topics addresses issues of design and culture locally and globally. I am a member of the board of the New England chapter of the Institute of Classical Architecture & Art, which bestowed an Arthur Ross Award on me in 2002. I work from Providence, R.I., where I live with my wife Victoria, my son Billy and our cat Gato. If you would like to employ my writing and editing to improve your work, please email me at my consultancy, dbrussat@gmail.com, or call 401.351.0457. Testimonial: "Your work is so wonderful - you now enter my mind and write what I would have written." - Nikos Salingaros, mathematician at the University of Texas, architectural theorist and author of many books.
View all posts by David Brussat →
This entry was posted in Architecture, Art and design, Preservation, Urbanism and planning and tagged Bjarke Ingels, National Civic Art Society, National Mall, Smithsonian, Washington DC. Bookmark the permalink.