College Hill looking south from across the Providence River.

Shot these photos after penning a strategy for the beautification of Providence that ran last Monday, Nov. 10, at GoLocalProv.com (where I now do a weekly column). The basic thrust of the plan requires the demolition of the city’s 10 most obnoxious buildings. These include the Rubik’s Cube and RISD’s Chace Center, which frame with ugliness a cityscape that ranks among the most beautiful in the world.

One of the advantages of photography is that by composing a shot in the camera you can edit out things you’d rather not see. Is this dishonest? Well, it depends on whether your goal is beauty or truth. I have edited the Rubik’s Cube (Old Stone Square, 1985) out in all four of these photos. It is off-frame to the right. I have edited the Chace Center (2008) out of all but the last one. In it, the Chace is the orange clunker left of center. Both must go because they degrade one of the world’s most beautiful civic horizons.

Full disclosure: I have informed you that the two uglies exist but I have forced you to look at only one of them. Best of both worlds. Almost.

To the north, way to the left, far outside the frame of these pictures, is the Darth Vader Building (One Citizens Plaza, 1992). It must go because it blocks views of Rhode Island’s State House (McKim, Mead & White, 1900) from downriver. I have left it out of these photos, too. My GoLocal slide show offers views of other buildings I’d demolish to secure the beauty of other parts of downtown. (The assumption is that over time nicer buildings will arise in their places; even if that takes a while, the result would be parking lots beyond which you would be able to see existing lovely buildings in the meantime.) 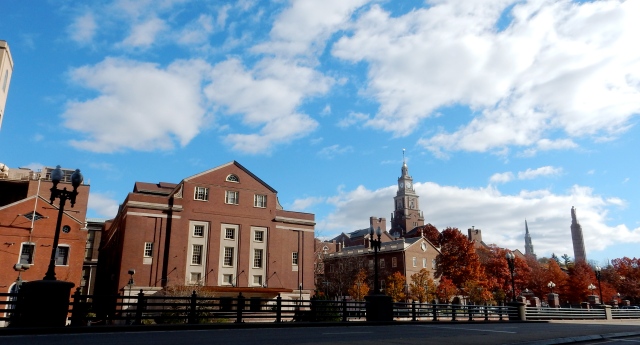 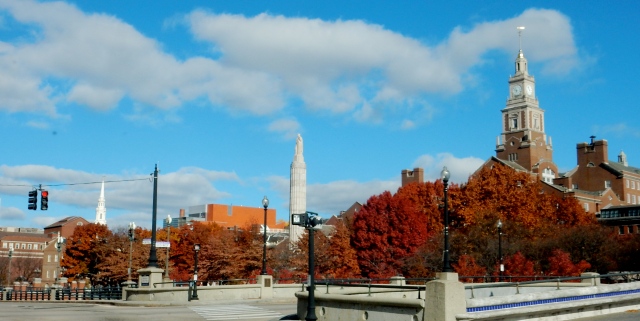 This blog was begun in 2009 as a feature of the Providence Journal, where I was on the editorial board and wrote a weekly column of architecture criticism for three decades. Architecture Here and There fights the style wars for classical architecture and against modern architecture, no holds barred. History Press asked me to write and in August 2017 published my first book, "Lost Providence." I am now writing my second book. My freelance writing on architecture and other topics addresses issues of design and culture locally and globally. I am a member of the board of the New England chapter of the Institute of Classical Architecture & Art, which bestowed an Arthur Ross Award on me in 2002. I work from Providence, R.I., where I live with my wife Victoria, my son Billy and our cat Gato. If you would like to employ my writing and editing to improve your work, please email me at my consultancy, dbrussat@gmail.com, or call 401.351.0457. Testimonial: "Your work is so wonderful - you now enter my mind and write what I would have written." - Nikos Salingaros, mathematician at the University of Texas, architectural theorist and author of many books.
View all posts by David Brussat →
This entry was posted in Architecture, Development, Photography, Preservation, Providence, Urbanism and planning and tagged College Hill, Demolition, GoLocalProv, Providence RI. Bookmark the permalink.