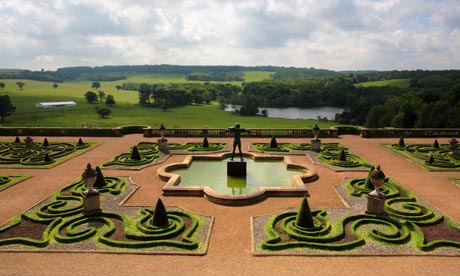 Garden of Harewood House, Leeds, with French style in foreground and British style landscape in background, both by Capability Brown. (theguardian.com) 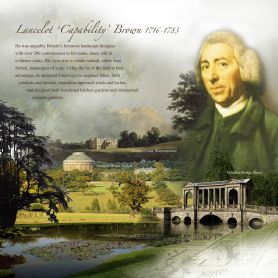 Capability Brown looking down on one of his landscapes. (lifechart.co.uk)

” ‘Now there’ said he, pointing his finger, ‘I make a comma, and there’ pointing to another spot, ‘where a more decided turn is proper, I make a colon; at another part, where an interruption is desirable to break the view, a parenthesis; now a full stop, and then I begin another subject.’ ”

This is how landscapes might be designed in the mind’s literary eye. The remark was addressed by Lancelot “Capability” Brown, the famous British 19th century gardener, to Hannah More, the poet, playwright and writer of religious tracts. Brown was among the first, and certainly the most well-known, advocate for transforming the style of British landscapes – mainly around the suburban manor houses of the wealthy of that era – from the much more formal French style to a more natural style. It is said that the landscape architect’s job was to perfect nature for the viewing pleasure of England’s elite (and, of course, the workers on their estates). That was then, of course.

Capability Brown is in the design news because, with the tricentennial of his birth, the Capability Brown Festival is sponsoring a landscape-design competition for a 45-hectare “contemporary multi-functional landscape” (whatever that is) at the Moccas Park National Nature Reserve, in Herefordshire, England.

Some, noting that the Landscape Institute is one of the festival’s partners in this celebration, have concluded that the evil forces of “landscape urbanism” have stolen a march on the Congress of the New Urbanism. Landscape urbanism is modernism’s belated attempt to recoup ground lost in planning circles to the mostly traditional town planning of New Urbanism, popular with developers and municipal planning offices around the country. But what landscape urbanism actually is remains sketchy. Proponents point to the new High Line park on the West Side of New York City as an example of it, but it is not quite replicable in other places, and was deuced expensive to create, beyond the means of most cities and towns. I have not yet visited it, and so I cannot judge it as readily as I might a building that I can visit through the science of photography, but it seems like a one-off proposition, hardly the basis for a new movement in landscape design.

Capability Brown has not yet been successfully hijacked by landscape urbanism. The historic dichotemy between French and English landscape design is not akin to the current dichotemy between traditional and modern architecture, let alone traditional and modern urbanism. French formal gardens and the English tweaking of natural wooded patterns align more with classical and vernacular types of traditional architecture. A landscape designed according to modernist principles would be perhaps more like an asphalt parking lot on hilly terrain with pods of shrubbery and modernist buildings in the background. We already have too much of that.

Still, traditionally inclined landscape architects might want to consider sending an entry to the competition, just to make sure things are on the up and up. Capability Brown would certainly spin in his grave if he thought that posterity would countenance the placement of modern architecture on his landscapes.

This blog was begun in 2009 as a feature of the Providence Journal, where I was on the editorial board and wrote a weekly column of architecture criticism for three decades. Architecture Here and There fights the style wars for classical architecture and against modern architecture, no holds barred. History Press asked me to write and in August 2017 published my first book, "Lost Providence." I am now writing my second book. My freelance writing on architecture and other topics addresses issues of design and culture locally and globally. I am a member of the board of the New England chapter of the Institute of Classical Architecture & Art, which bestowed an Arthur Ross Award on me in 2002. I work from Providence, R.I., where I live with my wife Victoria, my son Billy and our cat Gato. If you would like to employ my writing and editing to improve your work, please email me at my consultancy, dbrussat@gmail.com, or call 401.351.0457. Testimonial: "Your work is so wonderful - you now enter my mind and write what I would have written." - Nikos Salingaros, mathematician at the University of Texas, architectural theorist and author of many books.
View all posts by David Brussat →
This entry was posted in Architecture, Architecture History, Urbanism and planning and tagged Britain, Capability Brown, Landscape Design, Landscape Institute. Bookmark the permalink.