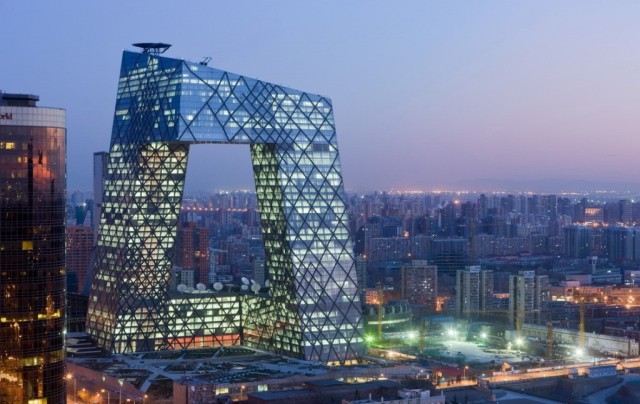 Far be it from me to agree with the head of the Chinese Communist Party on anything, but please excuse me for agreeing with Xi Jinping on one thing.

Speaking to a literary symposium last week, the Chinese president said, “No more weird architecture.” Instead, he said, “Fine art works should be like sunshine from the blue sky and the breeze in spring that will inspire minds, warm hearts, cultivate taste and clean up undesirable work styles.”

I applaud the maximum leader of the Middle Kingdom for his insight. He singled out the CCTV propaganda headquarters by Rem Koolhaas, often referred to by its nickname “Big Pants,” and to the new headquarters of the People’s Daily, which looks like a giant penis.

The humorous writer for Curbed, Spencer Peterson, in his article “Chinese President Is Sick of China’s ‘Weird Architecture,’ ” attributed Xi’s comments to his finally having got wind of the “Western world’s blog-fueled fascination with wacky Chinese buildings.” The barrel of laughs writes that Xi “surely must hate fun or something.” But Peterson may be is right that Xi picked up the hints of ridicule from the West, since Chinese leaders are notoriously deaf to the opinions of their own people. “People’s Daily” indeed!

The problem with “Big Pants” is less that it looks like a pair of trousers than that it looks like it is in the process of stomping on the Chinese people. But then the “Big Pants” moniker was probably teed up for public consumption by a nameless party hack in the bowels of propaganda. Maybe it was the same guy who came up with the “Bird’s Nest” nickname for the Beijing Olympic Stadium that looks more like a giant roll of barbed wire. He is probably too scared to attempt a plausible nickname for the People’s Daily.

(The vagina-like soccer stadium designed by Zaha Hadid for a nation where women are not allowed to display their faces certainly deserves to be noted here.)

I doubt that Xi Jinping’s concern for his ancient nation’s venerable culture will do much to assist the classical revival in the West. Maybe he can hold a joint press conference with Prince Charles to denounce Western cultural imperialism. As the leader of 1.3 billion people, Xi’s words are welcome. Maybe it’s not too late to shut the barn door on worldwide cultural genocide. Ya gotta start somewhere.

(Hats off to Robie Wood, of TradArch, for uncovering the news about Xi.)

This blog was begun in 2009 as a feature of the Providence Journal, where I was on the editorial board and wrote a weekly column of architecture criticism for three decades. Architecture Here and There fights the style wars for classical architecture and against modern architecture, no holds barred. History Press asked me to write and in August 2017 published my first book, "Lost Providence." I am now writing my second book. My freelance writing on architecture and other topics addresses issues of design and culture locally and globally. I am a member of the board of the New England chapter of the Institute of Classical Architecture & Art, which bestowed an Arthur Ross Award on me in 2002. I work from Providence, R.I., where I live with my wife Victoria, my son Billy and our cat Gato. If you would like to employ my writing and editing to improve your work, please email me at my consultancy, dbrussat@gmail.com, or call 401.351.0457. Testimonial: "Your work is so wonderful - you now enter my mind and write what I would have written." - Nikos Salingaros, mathematician at the University of Texas, architectural theorist and author of many books.
View all posts by David Brussat →
This entry was posted in Architecture, Art and design, Humor, Other countries and tagged art, CCTV, China, Culture, Genocide, People's Daily, Xi Jinping. Bookmark the permalink.

1 Response to Xi a Chinese visionary?