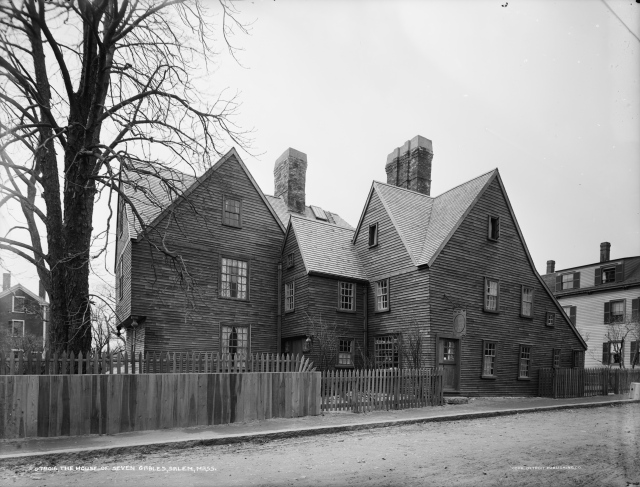 In his masterpiece (and my bible) The Golden City (1959), Henry Hope Reed cites a character, Holgrave, from Hawthorne’s House of Seven Gables, in describing early attitudes toward innovation in architecture. He has Holgrave, a daguerrotypist, say to his inamorata, Phoebe:

I doubt whether even our public edifices – our capitols, state-houses, court-houses, city halls, and churches – ought to be built of such permanent materials as stone or brick. It were better that they should crumble to ruin in twenty years, or thereabouts, as a hint to the people to examine into and reform the institutions which they symbolize.

By the end of the novel, Holgrave has changed his mind, now favoring the use of stone in buildings because “the exterior, through the laps of years, might have been adding venerableness to its original beauty and thus giving that impression of permanence which I consider essential to the happiness of any one moment.”

Good for Holgrave! But doesn’t the aging process, even if superior in traditional stone buildings over the glass, concrete and steel of modernist buildings, suggest decay as much as permanence?

Of course, but for our purposes, decay and permanence might as well be not opposites but one and the same. A building well along in the process of decay has aged, and age, with its implicit end in death, gets us as close as human endeavor may aspire to permanence, the eternal (leaving aside ecclesiastical theories).

But the late Henry Reed, whose spirit will be celebrated at a symposium next Saturday in Philadelphia, sponsored by its chapter of the Institute of Classical Architecture & Art, was correct. Classical buildings of natural materials don’t just age better than buildings of what he liked to call “the Modern.” Classical buildings last longer, almost unto eternity if kept in repair, than modernist buildings because the latter are designed to reflect “the era” and hence, rather than being timeless, are pegged to a specific period in history that by definition reaches its end almost instantaneously.

It is hardly surprising that modernism’s love for unnatural materials should result in an unnaturally short lifespan, or that its aging increases its ugliness rather than fostering a venerable look, as in traditional buildings of natural materials.

Given the widespread love for toying with nomenclature, Reed naturally was reluctant to allow modern architecture’s theft of the word modern to go without protest. Yet he always capitalized it, as do many today. Using such an honorific as capitalization is too good for modern architecture, in my opinion, but even worse was Reed’s choice to replace “the Modern” with his own appellation: Picturesque Secessionism. I lack the room to explain its significance here, but the very fact that it requires explanation suggests its lack of utility as a descriptive term, especially in public as opposed to professional discourse. But that’s a topic for another day.

This blog was begun in 2009 as a feature of the Providence Journal, where I was on the editorial board and wrote a weekly column of architecture criticism for three decades. Architecture Here and There fights the style wars for classical architecture and against modern architecture, no holds barred. History Press asked me to write and in August 2017 published my first book, "Lost Providence." I am now writing my second book. My freelance writing on architecture and other topics addresses issues of design and culture locally and globally. I am a member of the board of the New England chapter of the Institute of Classical Architecture & Art, which bestowed an Arthur Ross Award on me in 2002. I work from Providence, R.I., where I live with my wife Victoria, my son Billy and our cat Gato. If you would like to employ my writing and editing to improve your work, please email me at my consultancy, dbrussat@gmail.com, or call 401.351.0457. Testimonial: "Your work is so wonderful - you now enter my mind and write what I would have written." - Nikos Salingaros, mathematician at the University of Texas, architectural theorist and author of many books.
View all posts by David Brussat →
This entry was posted in Architecture, Architecture History, Art and design, Books and Culture and tagged Henry Hope Reed, House of Seven Gables, Modern Architecture, Nathaniel Hawthorne, The Golden City. Bookmark the permalink.

1 Response to Hawthorne and architecture