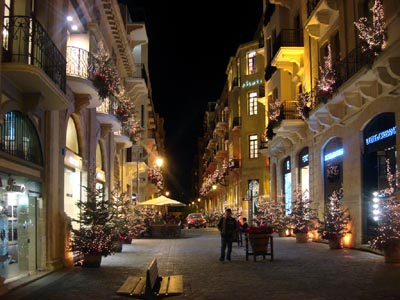 This photograph comes toward the end of a most beautiful website called AVOE. The site, sent to the TradArch list by Audun Engh, features the lovable urbanism that remains in Europe, and fights against modernism that has warred against beauty for decades. AVOE has been known to wander far afield to places where great civic spaces are rare, such as the United States. Here it lets us peek at the downtown shopping district of Beirut.

The Lebanese capital suffered terribly during the civil war of 1975 to 1990, and the nation’s politics remains a string of brutalities, punctuated by car bombings, but at least citizens there can try to leaven their plight with the charms of architecture. Shiite, Sunni, Maronite Christian and Druze sects so often at each other’s throats can turn civil when fanatics and their families stroll peacefully here. Beirut used to be called the Paris of the Near East, and at times perhaps the population can persuade itself that this remains the case. Classical architecture tames the uncivil breast.

The reconstruction of Beirut and its central district, heavily damaged in the civil war, has been controversial, with the corporate group Solidere superintending some excellent reconstruction and new building but also modernist junk. The photo above suggests that the best parts of Beirut flourish – physically, at least. And yet the absence of crowds may also suggest the validity of concern that the downtown is no longer truly for Lebanese but for foreigners only: When embassies in 2010 forbade employees from visiting downtown, its evening population virtually disappeared.

This blog was begun in 2009 as a feature of the Providence Journal, where I was on the editorial board and wrote a weekly column of architecture criticism for three decades. Architecture Here and There fights the style wars for classical architecture and against modern architecture, no holds barred. History Press asked me to write and in August 2017 published my first book, "Lost Providence." I am now writing my second book. My freelance writing on architecture and other topics addresses issues of design and culture locally and globally. I am a member of the board of the New England chapter of the Institute of Classical Architecture & Art, which bestowed an Arthur Ross Award on me in 2002. I work from Providence, R.I., where I live with my wife Victoria, my son Billy and our cat Gato. If you would like to employ my writing and editing to improve your work, please email me at my consultancy, dbrussat@gmail.com, or call 401.351.0457. Testimonial: "Your work is so wonderful - you now enter my mind and write what I would have written." - Nikos Salingaros, mathematician at the University of Texas, architectural theorist and author of many books.
View all posts by David Brussat →
This entry was posted in Architecture, Development, Other countries, Preservation and tagged Audun Engh, AVOE, Beirut, classicism, Europe, Lebanon. Bookmark the permalink.

1 Response to Beauty in Beirut