Posted on September 8, 2014 by David Brussat 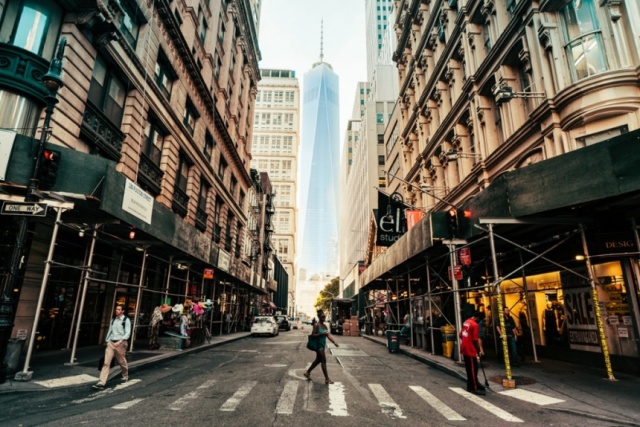 The Guardian has published a lengthy article, “1 World Trade Center: How New York Tried to Rebuild its Soul,” by Jason Farago. He bemoans the lost opportunity of the World Trade Center. But he does not mention what that lost opportunity is. He swoons over the Rafael Vinoly “damned skeleton” axed by Governor Pataki in 2003 after it had been selected – to be replaced by the Daniel Libeskind foolishness rendered (in my opinion) slightly less foolish in the process that was taken over by Larry Silverstein. Despite all this, the author’s desire for a humane reknitting of Lower Manhattan hovers between every line of his piece. Yet he never mentions that such a proposal had been made, quite publicly. The Franck Lohsen McCrery WTC proposal published in November 2001’s autumn issue of City Journal, the quarterly of the Manhattan Institute, would have filled the bill admirably.

I suppose it would not do for Farago to have mentioned it. But I link readers to it because it was the best hope of reviving America in those dark days. It never went beyond the first cut in the WTC competition, presumably because it was not “of our time.” But it was!

Architecture should not simply reflect the problems of society. A hundred years ago the founding modernists believed that architecture could help solve those problems. But since then it has only made them worse by reflecting those problems in its designs – in essence, using architecture to magnify those problems. The idea of solving them was an admirable ambition (if true), but modern architecture dumped from its tool box every tool that could have helped it succeed. It is no wonder that the modernists failed to improve their world, and have only made it worse. Modern architecture continues to flounder today, successive modernisms providing even wackier “solutions,” mocking the dead concept of using architecture to uplift humans rather than mimic the worst features of their society.

The solution is right there in front of our eyes, between every line of this piece, and quite straightforwardly so. It always has been. Will it continue to be purposely ignored?

[Addendum: Rob Steuteville reminds me that the Peterson Littenberg proposal, which featured restoring the street grid according to New Urbanist principles, was the most popular of the early WTC plans. Although I prefer the Franck Lohsen McCrery proposal because its traditional urbanism also reflected traditional architecture straightforwardly, it is certainly true that accepting any NU proposal (such as the PL) would have opened the door to a more vernacular, traditional, even classical approach to the WTC rebuild.]

This blog was begun in 2009 as a feature of the Providence Journal, where I was on the editorial board and wrote a weekly column of architecture criticism for three decades. Architecture Here and There fights the style wars for classical architecture and against modern architecture, no holds barred. History Press asked me to write and in August 2017 published my first book, "Lost Providence." I am now writing my second book. My freelance writing on architecture and other topics addresses issues of design and culture locally and globally. I am a member of the board of the New England chapter of the Institute of Classical Architecture & Art, which bestowed an Arthur Ross Award on me in 2002. I work from Providence, R.I., where I live with my wife Victoria, my son Billy and our cat Gato. If you would like to employ my writing and editing to improve your work, please email me at my consultancy, dbrussat@gmail.com, or call 401.351.0457. Testimonial: "Your work is so wonderful - you now enter my mind and write what I would have written." - Nikos Salingaros, mathematician at the University of Texas, architectural theorist and author of many books.
View all posts by David Brussat →
This entry was posted in Architecture, Development, Uncategorized, Urbanism and planning and tagged Daniel Libeskind, Franck Lohsen McCrery, Larry Silverstein, Lower Manhattan, New York, World Trade Center. Bookmark the permalink.