Posted on September 5, 2014 by David Brussat

The Cotton District, in Starkville, Miss. (This and all photos below by Sara Hines) 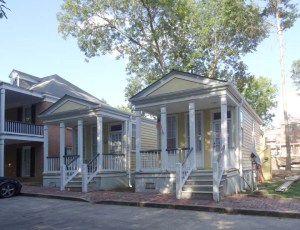 Not sure how this place eluded my classical radar, but Starkville, Mississippi, home of Mississippi State, has a neighborhood called the Cotton District, between the downtown of the city of 23,000 and its university campus. Wikipedia calls it the nation’s first New Urbanist district, but it was conceived by Dan Camp, a former shop teacher, 20 years before the Congress of the New Urbanism was chartered, and at least 15 years before the development of Seaside, Florida – long considered the first New Urbanist town.

Dan Camp, according to this history of the Cotton District on its website, started building on a shoestring for students (also mostly living on a shoestring), and ended up with a lovely, thriving place that I feel embarrassed never to have heard of. He eventually became mayor of Starkville for a while.

A passage at the conclusion of the history (written by Dan Camp), makes an extraordinarily important point: “Presentations are still made to the Planning Commission and the Board of Alderman for setbacks and lot variances. However, it becomes easier and easier each time, as the true feeling and beauty of the area have become evident.”

The permitting and design approval process drives developers nuts in so many places, including Providence, because in most places planning officials do not learn. They do not learn that if developers build what people like, permitting goes down like an oyster. They prefer, for some reason, to build junk, and when resistance arises, they slog through the permitting process and then go home and cry into their beer.

Architect and planner Sara Hines, figuring I might need some story ideas, sent me a couple today, including one on Dan Camp’s Cotton District. The pictures here are hers. I don’t even need to write about the beauty of the place. The photos say it all. And there are many more at the Cotton District website linked to above.

This post is published with my thanks to you, Sara, for so many reasons – not least of which is that the Cotton District has now been pushed into the ambit of my radar.

This blog was begun in 2009 as a feature of the Providence Journal, where I was on the editorial board and wrote a weekly column of architecture criticism for three decades. Architecture Here and There fights the style wars for classical architecture and against modern architecture, no holds barred. History Press asked me to write and in August 2017 published my first book, "Lost Providence." I am now writing my second book. My freelance writing on architecture and other topics addresses issues of design and culture locally and globally. I am a member of the board of the New England chapter of the Institute of Classical Architecture & Art, which bestowed an Arthur Ross Award on me in 2002. I work from Providence, R.I., where I live with my wife Victoria, my son Billy and our cat Gato. If you would like to employ my writing and editing to improve your work, please email me at my consultancy, dbrussat@gmail.com, or call 401.351.0457. Testimonial: "Your work is so wonderful - you now enter my mind and write what I would have written." - Nikos Salingaros, mathematician at the University of Texas, architectural theorist and author of many books.
View all posts by David Brussat →
This entry was posted in Architecture, Development, Urbanism and planning and tagged Cotton District, Dan Camp, New Urbanism, Sara Hines, Starkville MS. Bookmark the permalink.

11 Responses to The Cotton District