Charles Lamb by his friend and fellow essayist William Hazlitt.

Here is a passage from my favorite writer William Hazlitt’s essay “On the Pleasure of Painting,” written, I think, in the early 1820s. The famous British critic is known most for his essays on Shakespeare and other literature, but his best work, in my opinion, was his writing on a variety of subjects having to do with character in personality and the various mental tasks associated with different fields, from writing to boxing to juggling to painting. Hazlitt’s father, a dissenting minister, moved to New England when William was about 5 and stayed four years, at one point passing through Rhode Island on his way to Boston to found the first Unitarian congregation in America. 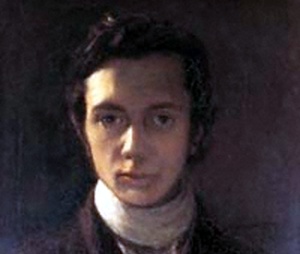 I wonder whether Hazlitt pere visited the Baptist congregation in Rhode Island, founded by Roger Williams in 1638; the First Baptist Church, built in Providence in 1775, arose three years before the birth of Hazlitt fils. As a critic later in life, Hazlitt would have had a field day with the Dallas Morning News architecture critic Mark Lamster, but he probably would have been able to rebut the lame assertions in Lamster’s recent piece on Dallas’s “pastiche” architecture – with a goofy complaint about modeling a Dallas church after the one in Providence – while he was still a wee child in America, though this was some 50 years before the creation of the state of Texas. Well, as I say, just wondering.

Hazlitt tried to be a painter before being a writer, and achieved considerable progress in his talent, but not monetary success. Still, he did paint a picture of his friend Charles Lamb, who had chuckled through Hazlitt’s wedding to his first wife. Today that painting hangs in the British Portrait Gallery. Here is the passage from Hazlitt’s essay on painting, where he describes trying to copy a portrait of an old woman:

The head I had seen at Burleigh [an art gallery] was an exact and wonderful facsimile of Nature, and I resolved to make mine (as nearly as I could) an exact facsimile of Nature. I did not then, nor do I now believe, with Sir Joshua [Reynolds, the painter], that the perfection of art consists in giving general appearances without individual details, but in giving general appearances with individual details. Otherwise, I had done my work the first day. But I saw something more in Nature than general effect, and I thought it worth my while to give it in the picture. There was a gorgeous effect of light and shade: but there was a delicacy as well as depth in the chiaro scuro, which I was bound to follow into all its dim and scarce perceptible variety of tone and shadow. Then I had to make the transition from a strong light to as dark a shade, preserving the masses, but gradually softening off the intermediate parts. It was so in Nature: the difficulty was to make it so in the copy. I tried, and failed again and again; I strove harder, and succeeded as I thought. The wrinkles in Rembrandt were not hard lines; but broken and irregular. I saw the same appearance in Nature, and strained every nerve to give it. If I could hit off this edgy appearance, and insert the reflected light in the furrows of old age in half a morning, I did not think I had lost a day.

This description by Hazlitt conveys what a painter tries to achieve when he is in the zone, and it strikes me as not too distant from the sort of subtlety an architect attempts to achieve in his own medium. The second line about the individual details grabbed me – this was a half century before Expressionism, and the line also brings to mind some of the differences between traditional and modern architecture. Note his use of the word “edgy” near the end.

As is typical in providing a quotation, I urge readers to get the essay and read the whole thing. Hazlitt starts by comparing writing to painting and finishes by describing his experience painting his elderly father, the Unitarian minister. All I can say is wow, from the first word to the last.

This blog was begun in 2009 as a feature of the Providence Journal, where I was on the editorial board and wrote a weekly column of architecture criticism for three decades. Architecture Here and There fights the style wars for classical architecture and against modern architecture, no holds barred. History Press asked me to write and in August 2017 published my first book, "Lost Providence." I am now writing my second book. My freelance writing on architecture and other topics addresses issues of design and culture locally and globally. I am a member of the board of the New England chapter of the Institute of Classical Architecture & Art, which bestowed an Arthur Ross Award on me in 2002. I work from Providence, R.I., where I live with my wife Victoria, my son Billy and our cat Gato. If you would like to employ my writing and editing to improve your work, please email me at my consultancy, dbrussat@gmail.com, or call 401.351.0457. Testimonial: "Your work is so wonderful - you now enter my mind and write what I would have written." - Nikos Salingaros, mathematician at the University of Texas, architectural theorist and author of many books.
View all posts by David Brussat →
This entry was posted in Architecture, Art and design, Books and Culture and tagged architecture, Art History, Expressionism, Painting, William Hazlitt. Bookmark the permalink.

2 Responses to Hazlitt on painting