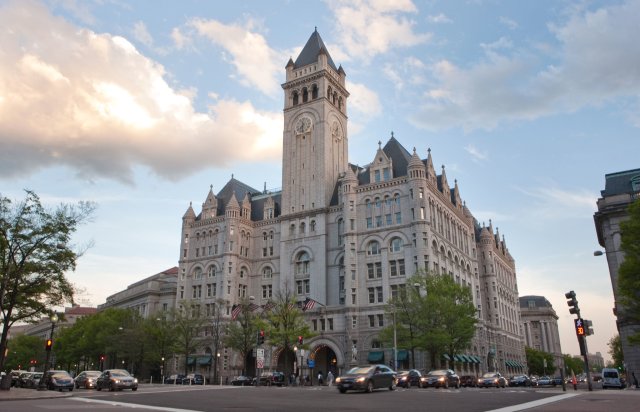 The New York Times reports the finalization of Donald Trump’s agreement to renovate the old U.S. Post Office Building, on Pennsylvania Avenue in Washington, D.C., as a hotel. This is one of my favorite buildings and I’m glad to hear it is going back into use. I used to frequent it when it was basically a failed office building surrounding a highly successful food court beneath an atrium of nine stories. What a glorious place to hang out! I hope the Trumps’ renovation – with the Fine Arts Commission looking over their shoulder – will not bring an end to its grand pubic usage.

The article is full of cliches and falsehoods, though no harm done. The writer, Eugene Meyer, says the Richardson Romanesque pile, completed in 1899, seems “out of place” among its Beaux Arts neighbors that went up in the 1930s. Not so! The picture above from the Times proves that. The buildings fit well together, as they all have classicism at their root, especially when one keeps in mind what might have gone in that space today, or in the 1970s when the feds wanted to tear it down. (The federal government was actually the last major American institution to abondon classicism for modernism.) And either the Donald or daughter Ivanka says you could not build this building today – but, oh, yes you could. It would be revolutionary, and given what modernism has done to the craftsman trades, it would be expensive, but yes, it could be done.

This blog was begun in 2009 as a feature of the Providence Journal, where I was on the editorial board and wrote a weekly column of architecture criticism for three decades. Architecture Here and There fights the style wars for classical architecture and against modern architecture, no holds barred. History Press asked me to write and in August 2017 published my first book, "Lost Providence." I am now writing my second book. My freelance writing on architecture and other topics addresses issues of design and culture locally and globally. I am a member of the board of the New England chapter of the Institute of Classical Architecture & Art, which bestowed an Arthur Ross Award on me in 2002. I work from Providence, R.I., where I live with my wife Victoria, my son Billy and our cat Gato. If you would like to employ my writing and editing to improve your work, please email me at my consultancy, dbrussat@gmail.com, or call 401.351.0457. Testimonial: "Your work is so wonderful - you now enter my mind and write what I would have written." - Nikos Salingaros, mathematician at the University of Texas, architectural theorist and author of many books.
View all posts by David Brussat →
This entry was posted in Architecture, Development, Preservation and tagged Donald Trump, Post Office Building, Washington. Bookmark the permalink.