My recent post about architectural details in Manhattan opened with a shot of the statuary on the base of a building erected 80 years before the tower itself was added eight years ago. (You can see it way down the street at the lower right of the first photo below.)

Before the end of my original Journal blog (March 2009-Dec. 2013) I wrote a post about a window-washing accident at the 46-story tower, designed by Sir Norman Foster and plopped upon a beautiful six-story building, c. 1928, on Eighth Avenue, filling the block between W56th and W57th streets. The tower itself was completed in 2006, the first skyscraper to break ground in the city after 9/11, a gleaming glass polyhedronesque concoction that you could see online in many photos. (The engineers spent millions to design an apparatus to support window-washing, and it still didn’t work.) But in none of the shots could you really get any idea of how glorious a piece of work was the base, designed in 1927-28 by Joseph Urban and George B. Post.

The base was described in the AIA Guide to New York City, published before Foster went to work on it. The guide said: “Shades of the Austrian Secession Movement, this sculptured extravaganza was commissioned by the William Randolph Hearst publishing empire. It was a base for a skyscraper aborted due to the Depression. The foundations are still there, waiting …”

Last week in Manhattan I strolled by to see it. What follows are the photos I snapped of my sad, sad approach to the site of the Hearst building’s desecration, and of the ornament stomped upon by Foster: 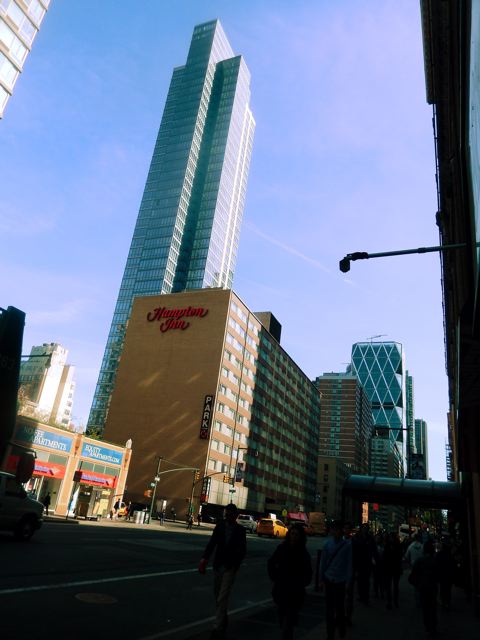 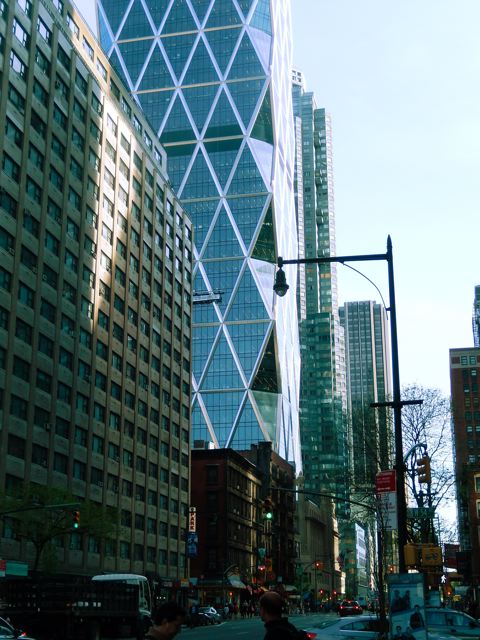 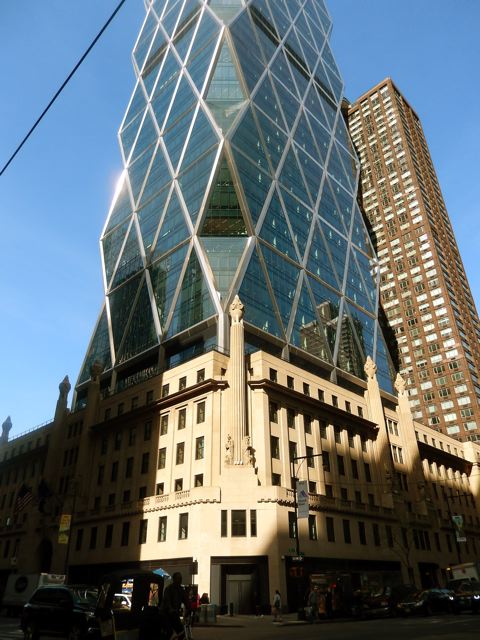 This blog was begun in 2009 as a feature of the Providence Journal, where I was on the editorial board and wrote a weekly column of architecture criticism for three decades. Architecture Here and There fights the style wars for classical architecture and against modern architecture, no holds barred. History Press asked me to write and in August 2017 published my first book, "Lost Providence." I am now writing my second book. My freelance writing on architecture and other topics addresses issues of design and culture locally and globally. I am a member of the board of the New England chapter of the Institute of Classical Architecture & Art, which bestowed an Arthur Ross Award on me in 2002. I work from Providence, R.I., where I live with my wife Victoria, my son Billy and our cat Gato. If you would like to employ my writing and editing to improve your work, please email me at my consultancy, dbrussat@gmail.com, or call 401.351.0457. Testimonial: "Your work is so wonderful - you now enter my mind and write what I would have written." - Nikos Salingaros, mathematician at the University of Texas, architectural theorist and author of many books.
View all posts by David Brussat →
This entry was posted in Architecture, Architecture History, Photography. Bookmark the permalink.

4 Responses to Foster atrocity in N.Y.