Original proposal for Parcel 6, along the Mosshasuck River. (Brussat archives)

A couple more examples of initial design proposals for buildings in Waterplace Park should suffice to nail down the veracity of the idea that a perverse hand was directing the Capital Center Commission and its design review panel in the first decade of this century. After a decade of reasonably high design quality for buildings produced in the Capital Center, such as Providence Place, the Westin Hotel and the Courtyard Marriott, initial proposals were brought to review for Parcel 6 (above) and Parcel 2 (below). Instead of these relatively appealing proposals we got Capitol Cove (whose sales were so poor that the developer leased it to Johnson & Wales as a dorm) and the Waterplace Luxury Condominium towers, whose units took so long to sell that the developer leased them out. They are now selling, but one must wonder at the size of the price penalty for condos whose view is of the GTECH Building on the other side of the basin. 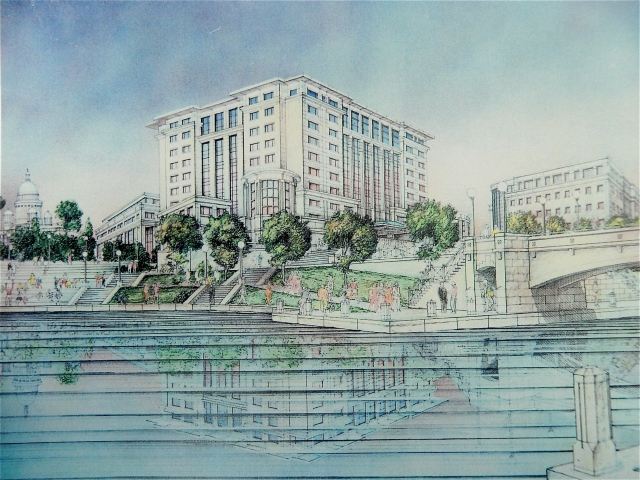 Original proposal for Parcel 2, next to Waterplace Park. (Brussat archives)

Below is the original post giving some of the history of Parcel 9, on the west side of  Waterplace Park, opposite Parcel 2 on the basin’s eastern edge. At the end of this post, beneath the description of early Parcel 9 proposals that were superceded by GTECH, are two photographs representing Waterplace circa 2000, and a decade later, after the unfortunate incursion of modern architecture. I will also add, at the bottom, a map of the parcels drawn up after River Relocation (Bill Warner’s new riverfront) was grafted onto the original Capital Center Pan.

I am always (and justly) complaining that Waterplace Park was trashed by the architects, developers and Capital Center commissioners who in the first decade of this century let ugly modernist buildings squat on the beautiful new waterfront created for downtown Providence by the late architect and planner Bill Warner in the 1990s. Here is some of the evidence.

I will add other proof, including the more traditional initial proposals superceded by modernism for Parcel 2 (now the Waterplace Luxury Condos) and Parcel 6 (now a dormitory), at the end of today [tomorrow morning, it turns out] and repost.

Worst, of course, was the GTECH building, on Parcel 9. The first proposal, in the late 1990s, was an ugster designed by New York starchitect wannabe Hugh Hardy. It got uglier and uglier as you went around its four different sides. Mayor Buddy Cianci called for its redesign on The Truman Taylor Show (Channel 6, I believe), and Hardy, with a degree of regret he later admitted, did the redesign, with most of the actual work by Rhode Island architect Kip McMahan of Robinson Green Beretta. His design appears at the top of this post. It is not great, far from it, but it does a much better job than GTECH of fitting in, especially with the Providence Place mall (then open just a year or so), but also on the cove side (below).

View of Waterplace looking toward Providence Place on a WaterFire night, circa 2000. (Photo by Richard Benjamin, RichardBenjamin.com)

This blog was begun in 2009 as a feature of the Providence Journal, where I was on the editorial board and wrote a weekly column of architecture criticism for three decades. Architecture Here and There fights the style wars for classical architecture and against modern architecture, no holds barred. History Press asked me to write and in August 2017 published my first book, "Lost Providence." I am now writing my second book. My freelance writing on architecture and other topics addresses issues of design and culture locally and globally. I am a member of the board of the New England chapter of the Institute of Classical Architecture & Art, which bestowed an Arthur Ross Award on me in 2002. I work from Providence, R.I., where I live with my wife Victoria, my son Billy and our cat Gato. If you would like to employ my writing and editing to improve your work, please email me at my consultancy, dbrussat@gmail.com, or call 401.351.0457. Testimonial: "Your work is so wonderful - you now enter my mind and write what I would have written." - Nikos Salingaros, mathematician at the University of Texas, architectural theorist and author of many books.
View all posts by David Brussat →
This entry was posted in Architecture, Architecture History, Providence, Urbanism and planning and tagged architecture, Capital Center, Cities, GTECH, Planning, Providence RI, Urbanism, Waterplace. Bookmark the permalink.