The convention center and annex as designed by unnamed contemporary architect. 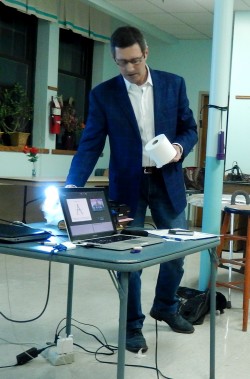 David Andreozzi, architect, replied to queries from those who missed it how his talk went last Wednesday evening at the Barrington Preservation Society. His reply, unedited, follows:

5. My introduction started with a new roll of toilet paper and a “show and tell” on how architects use it today … literally.

4. My scathing review of Vitruvius’s incomplete ideology, and announcement that I will be writing the eleventh book of De architectura with a respect to local vernacular of place, scale and culture.

3. Now, confirmed as an ICAA board  member, I came out of the closet with a celebrated modern house design of mine based on Villa Stein.

2. A Italian celebration back at my office after the lecture that included family, friends, patrons … with unending music, charcuterie, and cases of Montepulciano D’Abruzzo

And the number one thing you missed last night was … me dressed in a Barney the Dinosaur costume.

Other than that it was a pretty boring night.

This reporter can, of course, attest that it was anything but that, and that the office party that followed was delightful. But the answer to the question posed by this blog, as to how the architect hobbled by his RISD education has been able to design beautiful houses, remained elusive. Only the fact of the fine architecture remains, but it remains unexplained. However, I will do everything I can to scotch the rumor that, notwithstanding his round black spectacles, David Andreozzi is not Le Corbusier separated at birth. The photograph here of the nude Corbu will prove that, at least to his own and his lovely wife’s satisfaction. Fact is, the rumor scotches itself.

This blog was begun in 2009 as a feature of the Providence Journal, where I was on the editorial board and wrote a weekly column of architecture criticism for three decades. Architecture Here and There fights the style wars for classical architecture and against modern architecture, no holds barred. History Press asked me to write and in August 2017 published my first book, "Lost Providence." I am now writing my second book. My freelance writing on architecture and other topics addresses issues of design and culture locally and globally. I am a member of the board of the New England chapter of the Institute of Classical Architecture & Art, which bestowed an Arthur Ross Award on me in 2002. I work from Providence, R.I., where I live with my wife Victoria, my son Billy and our cat Gato. If you would like to employ my writing and editing to improve your work, please email me at my consultancy, dbrussat@gmail.com, or call 401.351.0457. Testimonial: "Your work is so wonderful - you now enter my mind and write what I would have written." - Nikos Salingaros, mathematician at the University of Texas, architectural theorist and author of many books.
View all posts by David Brussat →
This entry was posted in Architecture, Architecture History, Humor, Preservation and tagged architecture, Architecture Here and There, Barrington Preservation Society, David Andreozzi, David Brussat, House Plaques, Humor, Le Corbusier. Bookmark the permalink.