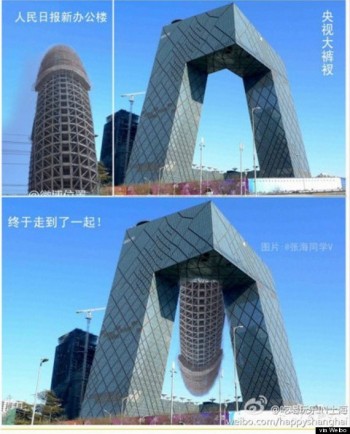 Even I don’t have the London City Halls to photomontage the People’s Daily into Qatar’s proposed World Cup Stadium, designed by Zaha Hadid.

I refer, of course, firstly to Norman Foster’s London City Hall, called the “glass gonad” by London Mayor Boris Johnson, who then ordered that during the Summer Olympics it be called “London House.” His predecessor, Ken Livingston, called it the “glass testicle.”

I refer secondly to Chinese architect Zhou Qi’s People’s Daily headquarters, in Beijing, which resembles an anatomically correct penis, nothing left to the imagination, and which was recently hung from the crotch of Rem Koolhaas’s aggressive CCTV headquarters, also in Beijing, by an expert in photo montage.

I refer thirdly to the stadium by Hadid, and wonder whether Zhou’s penis hanging from Koolhaas’s crotch can be cropped into the vulva of the stadium to create a stir.

When Hadid heard that people were comparing her proposed stadium in Qatar to a vagina, she said, “It’s really embarrassing that they come up with nonsense like this,” and asked, “What are they saying? Everything with a hole in it is a vagina? That’s ridiculous,” adding that “if a guy had done this project,” no such interpretations would be made.

That’s ridiculous too. Holes have always been treated as metaphorical vaginas by some, the Lord only knows why, and, as Lizzie Crocker says in her harrumphalist Daily Beast article “Zaha Hadid’s Vagina Stadium,”  “penis-in-the-sky visuals can be traced to the phallic imagery ingrained in architectural history, from the Greeks’ colossal penis pillars and Priapic temples to the 19th-century Place Vendome Column in Paris.”

But not until Zhou’s People’s Daily did we have a building that is not merely metaphorical, allegorical, rhetorical, allusive or suggestive. Zaha’s stadium is only slightly less anatomically correct. If she was not thinking of a vagina (not necessarily her own), then what was she thinking? Did she not imagine what others might think? Impossible. Ridiculous.

Her posturing is obviously just that. She is no doubt snickering into her sleeve at her ability to pull off the sort of in-your-face stunt that is modern architecture’s chief claim to fame – and in a Muslim country to boot, where men won’t even permit women’s faces to be shown. That’s even more cheeky than Zhou’s penis in communist China. It appears that the nihilism of modernism can slap a society upside the head until it dislocates the society’s neck. When will it become acceptable to complain?

This blog was begun in 2009 as a feature of the Providence Journal, where I was on the editorial board and wrote a weekly column of architecture criticism for three decades. Architecture Here and There fights the style wars for classical architecture and against modern architecture, no holds barred. History Press asked me to write and in August 2017 published my first book, "Lost Providence." I am now writing my second book. My freelance writing on architecture and other topics addresses issues of design and culture locally and globally. I am a member of the board of the New England chapter of the Institute of Classical Architecture & Art, which bestowed an Arthur Ross Award on me in 2002. I work from Providence, R.I., where I live with my wife Victoria, my son Billy and our cat Gato. If you would like to employ my writing and editing to improve your work, please email me at my consultancy, dbrussat@gmail.com, or call 401.351.0457. Testimonial: "Your work is so wonderful - you now enter my mind and write what I would have written." - Nikos Salingaros, mathematician at the University of Texas, architectural theorist and author of many books.
View all posts by David Brussat →
This entry was posted in Architecture and tagged architecture, Architecture Here and There, Beijing, CCTV, China, classical architecture, David Brussat, Gherkin, London, Modern Architecture, Norman Foster, Penis, People's Daily, Rem Koolhaas, Testicles, Vagina, Zaha Hadid. Bookmark the permalink.