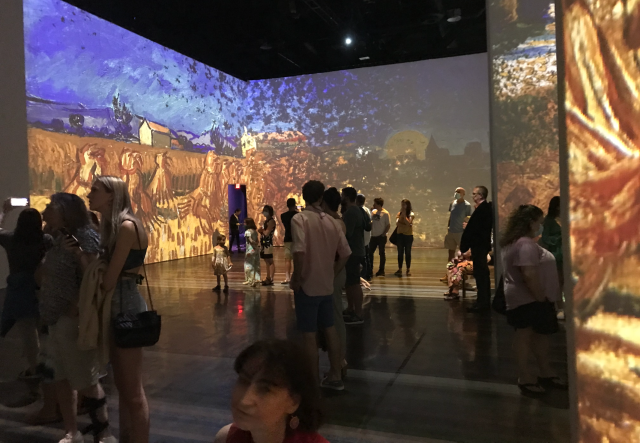 Photograph from within the Van Gogh exhibit at the Rhode Island Convention Center on Sunday.

This past weekend we took in the Van Gogh exhibit, called “Beyond Van Gogh: The Immersive Experience,” that has taken the country by storm these last few months. Van Gogh isn’t quite my cup of tea, but I was prepared to be impressed by the exhibit’s alleged technical virtues. Alas, they were pretty staid: mostly static images from paintings moving across the walls inside the Rhode Island Civic Center, bits shimmering here and there, and quotations from the artist intending to be both uplifting and noncontroversial – noting, for example, that Van Gogh was “nonplussed by the classical canon.”

Today I am tasked with reviewing a poet’s newly published book of modernist poetry about a long list of modernist artists – all except for Van Gogh, it turns out. No killing two flights of fancy with one stone. Michael Curtis is the poet. He is the research fellow at the Washington, D.C.-based National Civic Art Society. He is also a sculptor, painter, historian and architect (and quite good at all of the above) in addition to being a talented poet. (His website is theclassicalartist.com.)

Modern Art: An Exhibition in Criticism, published by the NCAS, contains 80 poems in quirky modernist styles apparently intended, in their verse as well as their form, to mock some 80 modernist painters, sculptors and architects – and none too gently. Here is an example, about an early modernist architect:

boxed it in motif.

Frames a treatise daft and lifeless,

Flat to read and see.

Black and beige and Bauhaus weary.

Praised to raise the green on priceless

I chose these two poems to reprint (to the extent my computer allowed) because they are about architects rather than painters or sculptors, but I still don’t really get it. I know only a few of the painters. I’ve spent most of my lifetime seeking to avoid experiencing the works of the moderns. I feel hindered, therefore, in writing this review by trying to interpret poems about painters. I know most of the architects, however, and think maybe I should be able to interpret poems about them, however obscure. I guess not.

The back jacket (a poet and didn’t know it!) helps out somewhat. It reads, in part, that

The author leaves out no cheap trick of meter or rhyme to achieve his ends. He employs adolescent sing-song, doggerel, slanting rhyme [whatever that is] – in short, every mischief-making device he can borrow or invent is used in a manner that would shame lesser poet. Yes, he stoops to conquer.

This is from the back jacket of his own book!

Again, I’m not really sure what to make of this, whether to be impressed by or embarrassed for the poet. I suppose that is the point. Modern art, sculpture, architecture and the rest are designed to confuse the reader or viewer in an effort to undermine his, her and, in general, the public’s capacity for judgment, thus making them easier (for whom?) to manipulate. At least that’s how one theory goes. Perhaps, in criticizing the mods, Michael Curtis has used the method of exposing their methods by pretending to use them himself.

If so, he may claim to have accomplished his mission, whatever it was – if we are even allowed to ask! In fact, I think I feel the same sort of dizziness I felt Sunday after having been surrounded by, immersed in, and emerging from the Van Gogh experience. 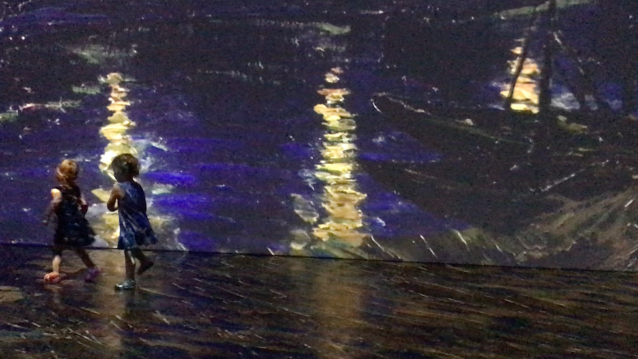 This wavering watery image at the Van Gogh ehxibit was its most impressive. (Try tapping link.)

This blog was begun in 2009 as a feature of the Providence Journal, where I was on the editorial board and wrote a weekly column of architecture criticism for three decades. Architecture Here and There fights the style wars for classical architecture and against modern architecture, no holds barred. History Press asked me to write and in August 2017 published my first book, "Lost Providence." I am now writing my second book. My freelance writing on architecture and other topics addresses issues of design and culture locally and globally. I am a member of the board of the New England chapter of the Institute of Classical Architecture & Art, which bestowed an Arthur Ross Award on me in 2002. I work from Providence, R.I., where I live with my wife Victoria, my son Billy and our cat Gato. If you would like to employ my writing and editing to improve your work, please email me at my consultancy, dbrussat@gmail.com, or call 401.351.0457. Testimonial: "Your work is so wonderful - you now enter my mind and write what I would have written." - Nikos Salingaros, mathematician at the University of Texas, architectural theorist and author of many books.
View all posts by David Brussat →
This entry was posted in Architecture, Art and design, Books and Culture, Uncategorized and tagged Frank Gehry, Joseph Albers, Michael Curtis, Modern Art: An Exhibition in Criticism, modernism, National Civic Art Society, Poetry, Providence RI, Rhode Island Convention Center, Van Gogh. Bookmark the permalink.