Architecture of the picturesque 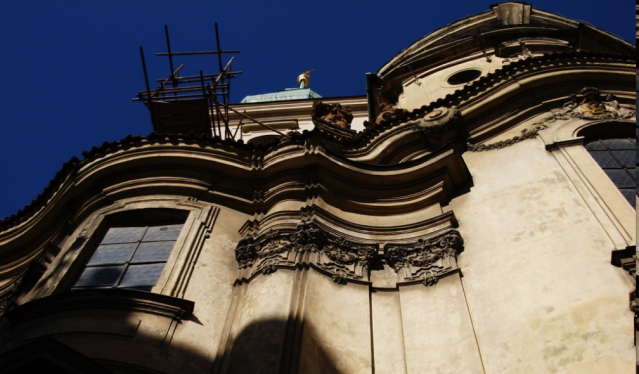 Baroque church in Prague that serves as my computer desktop. (Photo by author)

Having just twitted a panel of architects for having “touched on weighty academic matters that would never enter the mind of most citizens,” I beg readers’ pardon for touching on such a matter here.

Many classicists blame “the picturesque” for paving the way for modern architecture. Since I, like most people, think of the picturesque as quaint or charming, I never understood its connection with modernism, although the word “terror” often appears in the discussion. In this connection, paintings of nature as drama – a storm in a tranquil valley – are key. “The sublime and the beautiful,” awe-inspiring vs. serenity, the rational and the nonrational, the Enlightenment vs. Romanticism, Gothic vs. classical styles. Somehow, the picturesque got mixed up in all of this, and, in the words of Nir Haim Buras (Classic Planning, 2020), its “sensibility formulated Modernist thinking regarding design, buildings, and cities.”

I am still confused, but I know a good passage on architecture when I see one, and I recently happened upon a lengthy passage on the picturesque by Geoffrey Scott from his The Architecture of Humanism (1924) in a collection of essays called A Battle of Styles (1961), edited by Henry Hope Reed Jr. and William Coles. The passage struck me as enchanting; however that might relate to the picturesque, I’m not sure. It reads as follows:

Of these two types of aesthetic appeal [the classical and the picturesque], each commands its own dominion; neither is essentially superior to the other, although, since men tend to set a higher value on that which satisfies them longest, it is art of the former kind which has most often been called great. But they do both possess an essential fitness to different occasions. … Fantastic architecture, architecture that startles and delights the curiosity and is not dominated by a broad repose, may sometimes be appropriate. On a subdued scale, and hidden in a garden, it may be pleasant enough; but then, to be visited and not lived in. At a theatrical moment it will be right. It may be gay; it may be curious. But it is unfitted, aesthetically, for the normal uses of the art, for it fatigues the attention; and architecture once again is insistent, dominating and not to be escaped.

I believe Scott had Baroque architecture in mind, not the modernism we put up with incessantly today. Some modern architecture might be said to grant a feeling of repose, but most, especially today, is, at best exciting, even discombobulating – “insistent, dominating and not to be escaped.”

I have referred to Nir Buras’s The Art of Classic Planning. It sits open on my dinner table to be read at leisure. I will occasionally extract a trenchant quote (in fact, the entire book is one long trenchant quote), and eventually, in the not too distant future, will review this volume and its 498 large-format pages. I can’t wait to imbibe his long passage on the picturesque, which I clearly still need to read.

This blog was begun in 2009 as a feature of the Providence Journal, where I was on the editorial board and wrote a weekly column of architecture criticism for three decades. Architecture Here and There fights the style wars for classical architecture and against modern architecture, no holds barred. History Press asked me to write and in August 2017 published my first book, "Lost Providence." I am now writing my second book. My freelance writing on architecture and other topics addresses issues of design and culture locally and globally. I am a member of the board of the New England chapter of the Institute of Classical Architecture & Art, which bestowed an Arthur Ross Award on me in 2002. I work from Providence, R.I., where I live with my wife Victoria, my son Billy and our cat Gato. If you would like to employ my writing and editing to improve your work, please email me at my consultancy, dbrussat@gmail.com, or call 401.351.0457. Testimonial: "Your work is so wonderful - you now enter my mind and write what I would have written." - Nikos Salingaros, mathematician at the University of Texas, architectural theorist and author of many books.
View all posts by David Brussat →
This entry was posted in Architecture and tagged Architectural History, Architecture of Humanism, Battle of Styles, Classic Planning, Geoffrey Scott, Henry Hope Reed, Nir Buras, Picturesque, Romanticism. Bookmark the permalink.

8 Responses to Architecture of the picturesque