A short history of closets 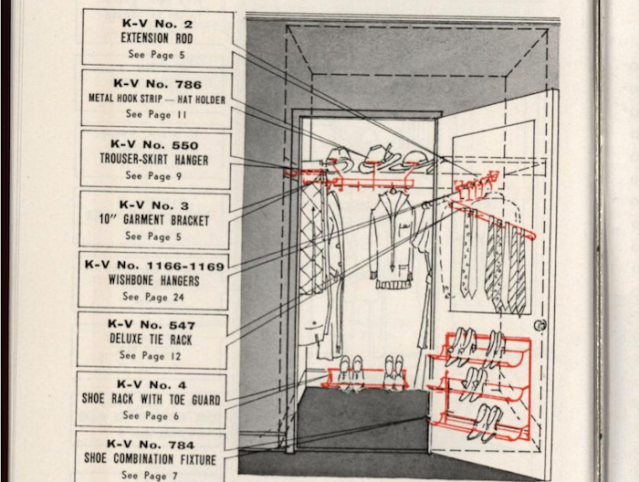 From the Regiment “K-Venience” Closet Catalogue. “Trim as a Regiment!” (See link below.)

Nir Haim Buras, author of the newly published The Art of Classic Planning, has sent some fascinating comments on closet history to the TradArch list, under the heading “Classic Closets … Not.” Imagine living without the assistance of closets. Now, thanks to Nir, closets have come out of the closet. He writes: 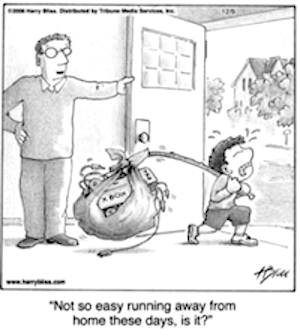 In ancient times, all of an individual’s belongings could likely be bundled in a cloth cloak or blanket and hoisted on one’s back or that of an animal. People who had more things likely kept them in chests, because those people also likely moved around quite a bit, including within their homes and between homes, seasonally chasing and avoiding the sun. Chests could easily be put on wagons or draught animals as well.

But there were also closets in the form of niches in walls. These often had shelves of stone or wood, and sometimes were enclosed by wood doors in wood frames that were attached outside the niches. Such is the case with Roman libraries, as I understand things.

From the Renaissance, when chests of drawers were placed on stands, to the 18th century, armoires became increasingly “functional” and useful. They had interior shelves, drawers, and places for hanging long dresses and cloaks. They were typically made of wood and likely held frequently used clothes or clothing that had been laundered and pressed. Armoires and closets were easy – and necessary – to perfume.

Built-in closets in late 19th century and early 20th century homes were small, but walk-in closets were more generous. The walk-ins held the out-of-season set of clothes and small closets in bedrooms just held some of the clothes being used, perhaps the more outer garments.

The coat closet at the front door is a diminution of a “mud room” or “boot room” where outdoor cloaks, coats, boots, and the bonnets and hats of guests, were stored and where boots were cleaned by the staff.

Remember that horse manure was piled 60 feet high in some cities (New York); and horse shit, ladies and gentlemen, was the actual beginning of modern planning.

The first planning convention in the world was convened around the topic of the worldwide gross excess of equine manure and its corollary, ground-up khaki-colored manure dust that coated everything, including the interiors of people’s lungs.

How did we get here from closets? – I told you that classic planning was holistic!!

Thank you, Nir! The most intense collection of curious information about houses and aspects of living you never really thought about can be found in At Home: A Short History of Private Life, by Bill Bryson. Seth Weine, a New York City literary sleuth when not working at the headquarters of the Institute of Classical Architecture & Art, tracks down books of interest to classicists, with links. He surely must have listed Bryson’s book noted above on one or another of his lists addressed to TradArch members. He also has just sent in some good thoughts on closets, which I reprint below, along with the pertinent link. He writes:

What were some of the earlier – at least last century’s – approaches to closet interiors, storage, and cabinets? Here are some answers (some of which are still clever enough, or well-thought-out enough, that you might want to consider using them today).

And you will have fun with this! [The link is at the end.]

Stowed Away: A Peek Into Closets of the Past

And who could not love a selection (which is included in the article) with this title:

The Shelving With Brains

What’s great about this article (and the series of which it is part) is that you can actually enlarge each of these catalogs, and then go through them, page-by-page.

***
But wait! There’s more! Where George Carlin Puts His Stuff.

This blog was begun in 2009 as a feature of the Providence Journal, where I was on the editorial board and wrote a weekly column of architecture criticism for three decades. Architecture Here and There fights the style wars for classical architecture and against modern architecture, no holds barred. History Press asked me to write and in August 2017 published my first book, "Lost Providence." I am now writing my second book. My freelance writing on architecture and other topics addresses issues of design and culture locally and globally. I am a member of the board of the New England chapter of the Institute of Classical Architecture & Art, which bestowed an Arthur Ross Award on me in 2002. I work from Providence, R.I., where I live with my wife Victoria, my son Billy and our cat Gato. If you would like to employ my writing and editing to improve your work, please email me at my consultancy, dbrussat@gmail.com, or call 401.351.0457. Testimonial: "Your work is so wonderful - you now enter my mind and write what I would have written." - Nikos Salingaros, mathematician at the University of Texas, architectural theorist and author of many books.
View all posts by David Brussat →
This entry was posted in Architecture and tagged Art of Classic Planning, Bill Bryson, Closets, Home: A Short History of Private Life, ICAA, Nir Buras, Seth Weine. Bookmark the permalink.

3 Responses to A short history of closets