Comments on the style wars 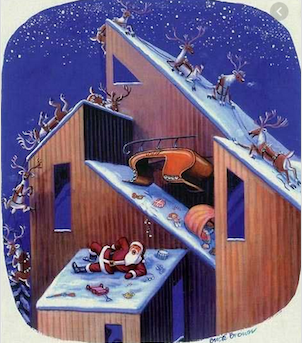 My last post “Modern architecture as spin” drew a reply from architect Daniel Morales that, paired with my reply, deserves to be front and center on this blog, rather than stuck in the comment section. Dan and I have gone round and round on this issue of how to approach our mutual opposition to modern architecture. Although we disagree, his argument has considerable merit and, I imagine, widespread support among traditionalist and classicist participants in the style wars that engage the field of architecture.

So here is our exchange as it has progressed so far. First his reply, triggered mostly, I believe, by this passage in my post: “All modernism – not just in architecture but in art, in music, in philosophy – is spin. It is not all stupid, but it is all fatuous.” Dan wrote:

Do you really think all Modernism is ‘silly and pointless’? I’m hardly a defender of modernism, but it doesn’t seem rhetorically useful to insult with such a broad brush. Most of those who work within its precepts are not idiots, just like classicists or traditionalists. Imagine what the world of architecture might look like once this style war ends. Will it provide room for all types of thinking or will it be an absolutist system demanding fealty to tradition?

Not all idiots, Dan, but fools.

A commenter, “Anonymous,” pokes at me for dodging Dan’s comment:

Thanks for the clarification.

To which I replied at some length, as Dan’s comment deserved:

You are right, Anon., Dan and I have been going back and forth on this for ages. Of course not all modernists are idiots, which I admitted in my post. But what Dan seeks, whether he recognizes it or not, is surrender. There will never be a blissful time when a thousand flowers bloom. The modernists will never permit it. Dan does not seem to understand that it is the mods, not the trads, who are propagating the style wars, and have from the beginning. It is they who rig the process so that major commissions, just about all except middle-class housing projects and mansions for the wealthy, go almost exclusively to modernists.

Modernists know that very few people actually like their work, and they know that there was almost no sound intellectual basis for having instituted modern architecture a century ago, and that its capture of the establishment in the ’40s and ’50s, and since then the defense of its power and authority, have been unfairly and unjustly manipulative. They know that design and construction practices they’ve promoted bake mediocrity into the system in ways that are now virtually impossible to evade or dislodge. They know that their place in the industry would collapse if the public had any say in the market for buildings, as would be appropriate in a democracy. So, no, I do not favor the “absolutist system” Dan seems to think I am calling for. I merely want the market for architecture to operate as it ought to in a free market political economy, reflecting democracy. Is that too much to ask? It would promote beauty and happiness among far more people than is the case today.

Yes, I do insult with a broad brush. Dan has the right to put it that way. But, compared to the flaws inherent in every other aspect of humanity and its fields of endeavor, the flaws of modern architecture are far and away more deleterious in their impact on the human condition than that of any other industry, profession or art group. Dan may call that an insult, but I call it the truth, based on the obvious facts of our built environment that are clear to all but those who refuse (as well they might!) to look or see.

Although obviously rather unpleasant, I think tradition should fight back against modernism. That is what I have tried to do by avoiding the “Can’t we all just get along” approach in my rhetoric. And, as I suggested in a recent post, “Lessons of the Berlin Wall,” I believe that mobilizing the public to agitate for what they want (and deserve) could have results far sooner than anyone might imagine.

Of course, Dan or anyone else should feel free to continue this discussion.

This blog was begun in 2009 as a feature of the Providence Journal, where I was on the editorial board and wrote a weekly column of architecture criticism for three decades. Architecture Here and There fights the style wars for classical architecture and against modern architecture, no holds barred. History Press asked me to write and in August 2017 published my first book, "Lost Providence." I am now writing my second book. My freelance writing on architecture and other topics addresses issues of design and culture locally and globally. I am a member of the board of the New England chapter of the Institute of Classical Architecture & Art, which bestowed an Arthur Ross Award on me in 2002. I work from Providence, R.I., where I live with my wife Victoria, my son Billy and our cat Gato. If you would like to employ my writing and editing to improve your work, please email me at my consultancy, dbrussat@gmail.com, or call 401.351.0457. Testimonial: "Your work is so wonderful - you now enter my mind and write what I would have written." - Nikos Salingaros, mathematician at the University of Texas, architectural theorist and author of many books.
View all posts by David Brussat →
This entry was posted in Architecture and tagged Daniel Morales, Modern Architecture, Rhetoric, Spin, Style Wars, traditional architecture. Bookmark the permalink.

5 Responses to Comments on the style wars