Lippitt House, at Hope and Angell, hosted the College Hill Neighborhood Association’s community meeting to hear about and comment on a hotel proposed by Edward F. Bishop and Smart (we’ll see) Hotels at Angell and Brook. Ed Bishop is a longtime resident and booster of the neighborhood, but his six-story hotel, if built as illustrated in Monday’s presentation, will continue trends that threaten the quality of life in College Hill.

The danger comes not so much because three old houses (including Bishop’s insurance office) would be demolished. That’s a basic problem with this proposal and most other projects completed on the East Side in recent decades. The danger is that the hotel’s bland appearance would not make up for the loss of the three old houses, and would pave the way for more blandness. The loss of the houses would be more bearable if the hotel’s design were more elegant – if it lived up to the standards of the neighborhood.

The design looks cheesy, but that’s hard to tell from architectural drawings. If it is to live up to community standards, the hotel’s cornice should be more ornate, the windows should be narrower, more vertical, not horizontal, with more panes per window. This would enable an additional rank of windows, separated by slenderer piers, decorated by pilasters, and with a more robust base. If the massing cannot offer a sense of movement, the window reveals should be deep enough to suggest strength. That’s just for starters. The color scheme is fine, with its natural hues. Too many new buildings seek to fake animation by introducing contrasting color schemes. Not this hotel (so far).

It was encouraging to hear, toward the beginning of the presentation, that the design is preliminary and that “colors and materials” were not yet final. But later, answering a question from a skeptical audience, project architect Eric Zuena insisted that he would not be designing a hotel that “copied the past.” He said that as if he thought it would give him the cooties. He said his intention is to design a “transitional” building. This was bad news. Without realizing it, Zuena let the cat out of the bag. His word “transitional” means that not much would change from the initial bland design.

Zuena, like almost all architects today, believes new design which follows architectural traditions that evolved over hundreds of years is illegitimate – “not of our time.” Such an attitude condemns every old building we love in Providence to illegitimacy. For centuries, all new buildings “copied the past.” Zuena no doubt would object that he loves the city’s historical buildings as much as the next guy, and he probably does. But if so, why does he oppose designing new buildings in traditional styles? Such opposition cannot be justified. So he wants to have it both ways – to be seen as forward-looking without seeming to disdain the architecture that even he must admit makes Providence Providence and not, say, Hartford or Worcester.

The hotel’s proponents ardently fear a battle over their project similar to the one that has hobbled the proposed Fane tower in the Jewelry District. Quite understandable. They want to have the community on their side. But then why are the drawings being shown to the public so bland? If the proponents had started with a beautiful set of drawings, they would have the community on their side by now – all but those who are dead set against losing any old houses (a perfectly valid stance). If they ended up building a beautiful hotel, then they could charge higher room rates and perhaps recoup the cost of a lovelier hotel. If they eventually had to dumb it down, the community would be disappointed but the developers would already have won the battle.

So who knows why the initial drawings are so bland. Maybe the developers really did not believe the community would object. You’d think developers and their architects would be genuinely receptive to local opinion, but most of them haven’t the faintest idea what real people think. They live in silos impervious to views that contradict the fallacies architects learned in school or the dollar-centric environment that nurtures developers. Faulty ideas go unchallenged by architects’ professional associations and the architectural media. The public be damned, and if not damned, ignored. It used to be that developers, and architects, tried to satisfy clients and the public. The reverse today is true, and so development strategies feature obfuscation rather than clarity, complexity rather than simplicity and honesty. To admit wanting a “transitional” hotel is to be unusually frank, but that doesn’t make it good.

Nothing would help Providence more than a hotel project that teaches the public that beauty has not been lost to the march of time but is as valid and as feasible today as it was yesterday. One of my correspondents always ends her emails with this motto: “It is not good because it is old, it is old because it is good.” A hotel will live longer and profit more, its developers will be more respected, if it becomes part of the city’s infrastructure of love.

Perhaps the objections raised at Lippitt House will penetrate, and we’ll see improved drawings next time around that reflect what the College Hill community deserves. 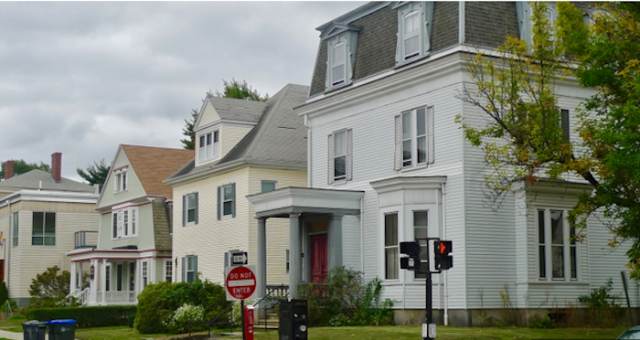 Three houses on Angell Street at risk in proposal for a hotel on College Hill. (William Morgan)

This blog was begun in 2009 as a feature of the Providence Journal, where I was on the editorial board and wrote a weekly column of architecture criticism for three decades. Architecture Here and There fights the style wars for classical architecture and against modern architecture, no holds barred. History Press asked me to write and in August 2017 published my first book, "Lost Providence." I am now writing my second book. My freelance writing on architecture and other topics addresses issues of design and culture locally and globally. I am a member of the board of the New England chapter of the Institute of Classical Architecture & Art, which bestowed an Arthur Ross Award on me in 2002. I work from Providence, R.I., where I live with my wife Victoria, my son Billy and our cat Gato. If you would like to employ my writing and editing to improve your work, please email me at my consultancy, dbrussat@gmail.com, or call 401.351.0457. Testimonial: "Your work is so wonderful - you now enter my mind and write what I would have written." - Nikos Salingaros, mathematician at the University of Texas, architectural theorist and author of many books.
View all posts by David Brussat →
This entry was posted in Architecture, Development and tagged College Hill, Edward F. Bishop, Lippitt House, Providence RI, Smart Hotels. Bookmark the permalink.