Art of the Olive Oyl skyline 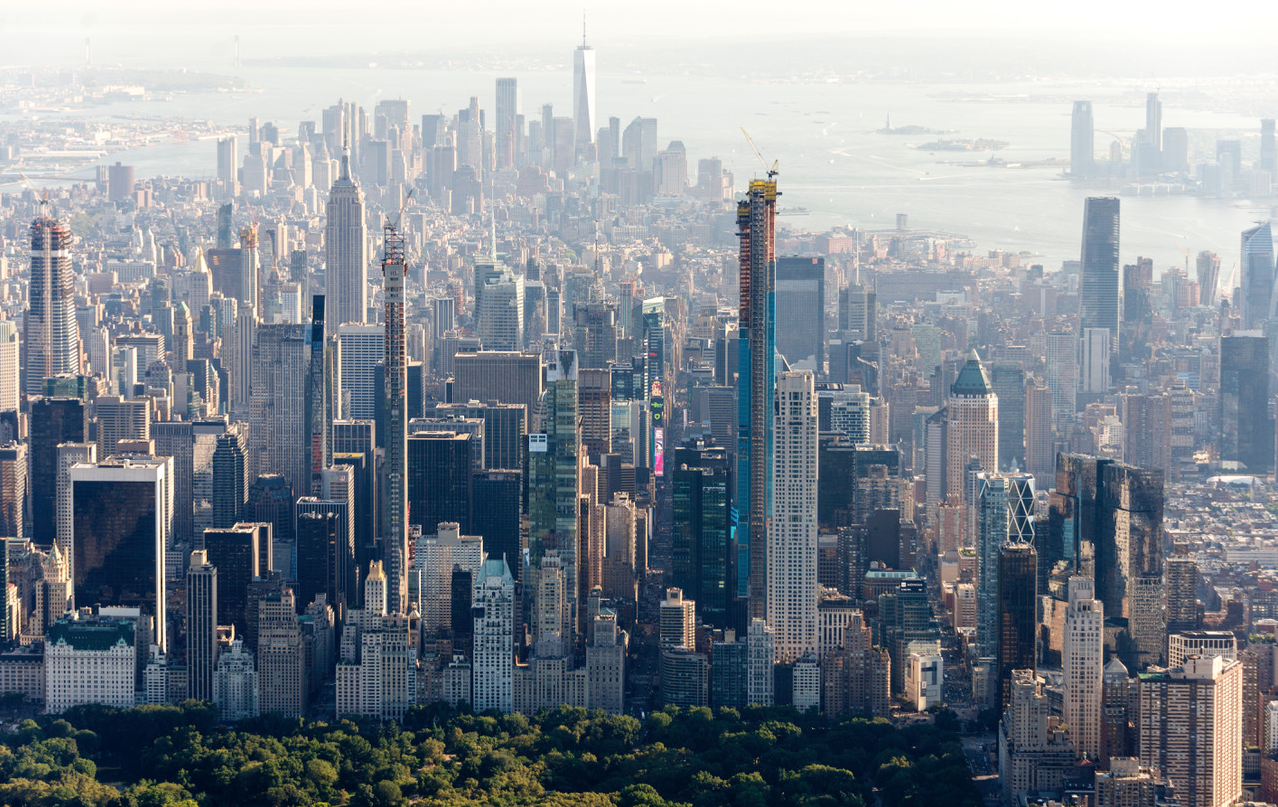 Photo of Manhattan from above Central Park. (Steve Mouzon)

This amazing (and scary) shot of Manhattan snapped (if you can say that about photos these days) from a helicopter hovering over Central Park was taken the other day by Miami architect Steve Mouzon. He and others may very well be astonished at the number of stick towers shooting up into the firmament, rivaling and eventually topping the height of the Empire State Building (1,250 feet). The first completed supertall stick was 432 Park Ave., at 1,396 feet, which was inspired by a trash can, and looks it; architect Rafael Viñoly admits it. After reading of the London skyline after the svelte Tulip’s supposed official demise, what are we to make of this sprouting of Olive Oyl condominiums?

The one toward the right, Mouzon writes, may have still 20 or 30 stories to go before topping out. Is that the one with the blue curtain wall and the yellow crane up top? If so, it looks to leave the poor Empire State in the dust. But that probably won’t be the only one. Curbed NY reports that 27 supertalls (not all of them sticks) are finished, under construction, or in the design and development phase (“NYC’s supertall skyscraper boom, mapped“). The supertalls are, by definition, over 984 feet. Nothing on the boards as yet breaks the height barrier – the “megatalls,” which must zoom over 1,968 feet. (Who comes up with these numbers anyway?)

Some of these sticks are so thin that only one apartment fits on each floor. They are less architectural than engineering marvels – most are not much to look at, but who cares? Who will want to sway in the wind scores of floors up there if the engineering’s not quite up to snuff? Is there an office charged with stamping a stick’s taut cred with a reliable Good Housekeeping seal of approval? In New York? Maybe. Maybe not. But bouts of wind flux may well be the de rigueur topic of conversation for the high and mighty on the way up and wondering what to talk about with occasional fellow travelers on the elevators. (Can there be more than one elevator in a stick?)

As Steve’s photograph suggests, these sticks are poking out the eyes of those for whom the skyline of Manhattan is the cat’s meow. Frankly, however, the elegant skyline long ago went the way of the dodo. Until the 1970s the New York skyline was both graceful and impressive. After the 1970s it remained impressive. Now it is, well, the New York skyline. Eventually it will look like an upturned hairbrush. Too bad.

This blog was begun in 2009 as a feature of the Providence Journal, where I was on the editorial board and wrote a weekly column of architecture criticism for three decades. Architecture Here and There fights the style wars for classical architecture and against modern architecture, no holds barred. History Press asked me to write and in August 2017 published my first book, "Lost Providence." I am now writing my second book. My freelance writing on architecture and other topics addresses issues of design and culture locally and globally. I am a member of the board of the New England chapter of the Institute of Classical Architecture & Art, which bestowed an Arthur Ross Award on me in 2002. I work from Providence, R.I., where I live with my wife Victoria, my son Billy and our cat Gato. If you would like to employ my writing and editing to improve your work, please email me at my consultancy, dbrussat@gmail.com, or call 401.351.0457. Testimonial: "Your work is so wonderful - you now enter my mind and write what I would have written." - Nikos Salingaros, mathematician at the University of Texas, architectural theorist and author of many books.
View all posts by David Brussat →
This entry was posted in Architecture, Development and tagged 432 Park Ave., Curbed NY, Empire State Building, Olive Oyl, Skyscrapers, Steve Mouzon, Supertall Skyscrapers. Bookmark the permalink.

4 Responses to Art of the Olive Oyl skyline