The Chinese-American architect Ieoh Ming Pei died last week at age 102 after a career designing modernist buildings, many of them now famous. Since it is poor manners to speak ill of the dead, I will say only that most readers of this post can guess my opinion of Pei’s work. His life and work intersected frequently with my life, however, so here, in his honor, are several of those points of intersection.

In the 1950s, not long after Pei started out as an architect, my father worked as a planner for a development firm called Webb & Knapp, which worked on projects initiated by its owner, the real-estate tycoon William Zeckendorf. Among the firm’s architects was Pei, who designed three residential towers for the Society Hill project in Philadelphia. 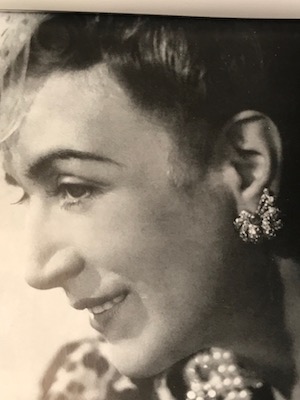 My father managed the acquisition of land for that project, and hired a Hungarian lady, age 64, to go to high-society parties and teaze out who had land for sale. She used to come to our house for dinner and give me toy airplanes (I was 5). Later, my parents told me “Princess Stephanie” had been “in the Hitler circle” during World War II, which, I figured, meant she lived in Berlin during the war. Well, decades later I read a book, Explaining Hitler, by Ron Rosenbaum, and came upon several pages about Stephanie von Hohenlohe (a princess by marriage) in a chapter on Office of Strategic Services debriefings during the war. It seems she was not only a courtier in the Hitler circle but was a suspected spy thought by some historians to have had a relationship, of some sort, with the mad Führer.

Well, I’ve strayed from Pei. Sorry! But not long afterward, my father’s boss at Webb & Knapp, Bill Slayton, hired Pei to build him a house at 3411 Ordway St., three or four blocks from our house on Rodman Street, in Washington’s Cleveland Park neighborhood. He created three concrete barrel vaults you could see right through. My old buddy Steve Mields, who also grew up on Rodman, recalls that “Slayton’s house was always dark, dank and humid. Smelled of mildew. I was paid peanuts to weed and cut the grass when I was a kid. Never thought much of the design.” Still, it became the local curiosity in a neighborhood of rambling old houses eclectic in style, each lovelier than the next. Pei was among the “Slayton Irregulars,” who dined together and chewed on architecture and planning. Slayton served in top posts at both the American Institute of Architects and the U.S. Urban Renewal Administration, which were, I suspect, then as now, in each others’ pockets.

To me, even as a kid, the Slayton House (1960) seemed mainly an exercise in silliness. As a formal design it had too many humps to be either an M&M logo or a Bacterian camel.

In the 1970s I attended Emerson College in Boston. One of my several apartments there looked over Marlborough Street, with the Pei-designed Hancock Tower at the epicenter of my view above the townhouses of the Back Bay. Pei had overseen a design whose windows started popping out soon after the building opened. The windows were filled with plywood until their repair, so I resided at Ground Zero for the “world’s tallest wooden building.” Eventually, glass panes replaced the plywood, and thank goodness. Because of its parallelogram shape, especially from a certain spot in Copley Place, it seems two dimensional, as if it were a razor blade.

Beautiful? Hardly. But exciting? Like any gigantic razor blade, yes! (“I cut off your head!”) The apogee of modern architecture’s allure is not called “The Wow Factor” for nothing.

In the 1970s, Pei designed the East Wing of the glorious National Gallery of Art. The West Building (1940) was reached by a sculpture garden, which blessedly separated the two – one a classical beauty of gentle articulation by John Russell Pope and the other a modern clash of triangular forms famous for its sharpest exterior angle and the degree to which the public has rubbed it into a becoming softness. I am among the millions to have stroked it, but have not been able to determine whether the $68 million renovation of the East Wing begun in 2013 has abolished this beloved feature, one of the few humanistic elements, however unintended, in the building’s design.

Cross atop penthouse atop Lamar Building, in Augusta. (Kirby’s Augusta)

In 1981, I took my first newspaper job with the Augusta (Ga.) Chronicle. Augusta was a charming place, or had been. By ’81, it had a hat trick – Civic Center, Chamber of Commerce Building and even a Bicentennial Park – by Pei. Fifteen years before his Louvre Pyramid, Pei plopped a pyramidal penthouse atop Augusta’s Lamar Building, a landmark classical tower. Villain!

Oops, could not resist. No speaking ill of the dead. Sorry.

(Speaking of villainy, after placing an illuminated cross on top of the penthouse pyramid in the 1970s, an owner of the building, state senator R. Eugene Holley, was convicted of bank fraud and served time in prison. And down came the cross. The penthouse, I hear, stands empty.)

Again, I recognized this (the penthouse and cross) as blasphemy well before I joined the Providence Journal in 1984 and became “Daoud” (as a Journal colleague rebranded me): the crusader against modern architecture. And Pei continued to dog my every turn in life. 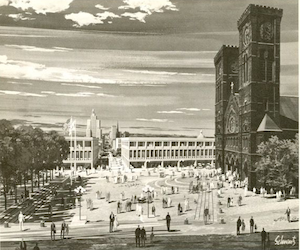 After I started writing about architecture for the Journal in 1990, I was not surprised to learn that the lonely and meditative Cathedral Square was designed by I.M. Pei. Was its isolation a sort of religious element of the design? I do not know. The square was one of the very few proposals from the uber-modernist urban-renewalesque Downtown Providence 1970 plan (announced in 1960) to be built. Its architecture mainly served to block off views of the two towers of the Cathedral of Sts. Peter & Paul. They are reminiscent of Notre-Dame’s two towers. Cathedral Square has been compared for years since its completion with the plaza where Westminster and Weybosset streets meet – the eastern end of the “bow” whose western end, at Cathedral Square, was obliterated by urban removal.

So, there you have it. Given his long shadow across my life and career, I must admit that I.M. Pei’s modern architecture is among the chief influences in the formation of my love for classical architecture. May he rest in peace. 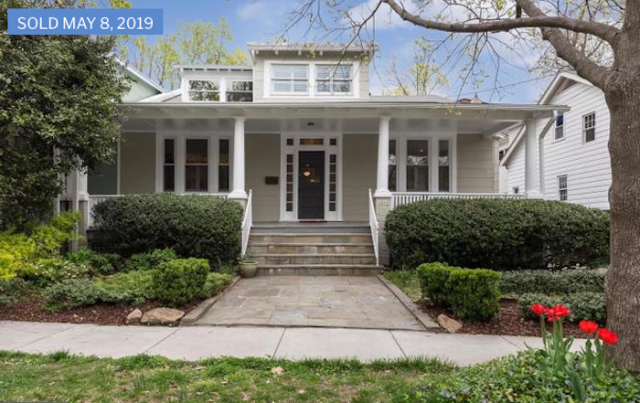 This blog was begun in 2009 as a feature of the Providence Journal, where I was on the editorial board and wrote a weekly column of architecture criticism for three decades. Architecture Here and There fights the style wars for classical architecture and against modern architecture, no holds barred. History Press asked me to write and in August 2017 published my first book, "Lost Providence." I am now writing my second book. My freelance writing on architecture and other topics addresses issues of design and culture locally and globally. I am a member of the board of the New England chapter of the Institute of Classical Architecture & Art, which bestowed an Arthur Ross Award on me in 2002. I work from Providence, R.I., where I live with my wife Victoria, my son Billy and our cat Gato. If you would like to employ my writing and editing to improve your work, please email me at my consultancy, dbrussat@gmail.com, or call 401.351.0457. Testimonial: "Your work is so wonderful - you now enter my mind and write what I would have written." - Nikos Salingaros, mathematician at the University of Texas, architectural theorist and author of many books.
View all posts by David Brussat →
This entry was posted in Architecture and tagged Augusta Chronicle, Cathedral Square, Hancock Tower, I.M. Pei, Louvre Pyramid, National Gallery of Art, Society Hill, William K. Brussat, William Slayton. Bookmark the permalink.