Save the carriage house, too

The carriage house and servants’ quarters at 315 Slater Ave. is among the outbuildings that would be demolished along with the Beresford-Nicholson house, on the East Side of Providence, if the city approves a proposed major subdivision of the estate along Blackstone Boulevard. (See “Meanwhile, on Blackstone“) Whatever happens to the mansion itself, this dear example of vernacular architecture designed by Clarke, Howe & Homer for stockbroker William Beresford but not built until 1925 after the property was sold to Paul Nicholson, veep of Nicholson File, must be saved.

Perhaps it can be cut out of the larger development proposed by the Bilotti Group, or maybe the Bilotti Group itself can be put on a rocket and blasted off to Mars. I don’t know. But for years I’ve been rounding that curve where Slater bends twice and turns into Cole Avenue. If you head north on Slater, you follow a stone wall on your right into the second bend, where the stone wall is taken over by a large, rough-hewn cottage with red-framed windows and dormers, a slate roof, the whole covered with moss, vines and ivy, and entered through a big red door in the wall.

Nobody who lives in or traverses this area regularly can fail to recognize it. It is a landmark, even more so than the fine Nicholson house at 288 Blackstone itself. Whenever I drive by, I am momentarily a-swoon at this most romantic of structures. I have no idea what the far side looks like from the Nicholson grounds, let alone what it is like inside. It looks worn down and dilapidated. If it is saved and restored, the effort should be taken to maintain the graceful patina of its long dance with nature, as is done with marvelous old properties in Charleston and New Orleans.

Anyhow, the fate awaiting the carriage house must be fought vigorously at a hearing this afternoon of the City Plan Commission at the Department of Planning and Development, just across Empire Street on Westminster. The meeting, with a hearing at which the public can speak, is set for 4:45 p.m. I apologize for being so late in posting this. I was not even aware until yesterday that this carriage house was part of the Nicholson estate. 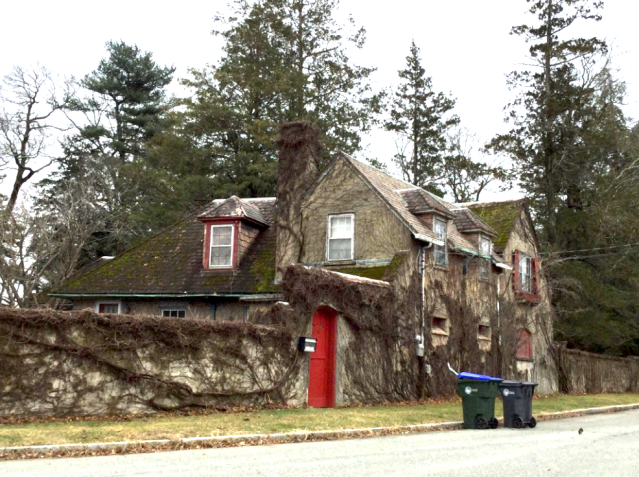 This blog was begun in 2009 as a feature of the Providence Journal, where I was on the editorial board and wrote a weekly column of architecture criticism for three decades. Architecture Here and There fights the style wars for classical architecture and against modern architecture, no holds barred. History Press asked me to write and in August 2017 published my first book, "Lost Providence." I am now writing my second book. My freelance writing on architecture and other topics addresses issues of design and culture locally and globally. I am a member of the board of the New England chapter of the Institute of Classical Architecture & Art, which bestowed an Arthur Ross Award on me in 2002. I work from Providence, R.I., where I live with my wife Victoria, my son Billy and our cat Gato. If you would like to employ my writing and editing to improve your work, please email me at my consultancy, dbrussat@gmail.com, or call 401.351.0457. Testimonial: "Your work is so wonderful - you now enter my mind and write what I would have written." - Nikos Salingaros, mathematician at the University of Texas, architectural theorist and author of many books.
View all posts by David Brussat →
This entry was posted in Architecture, Development and tagged 315 Slater Ave., Beresford Carriage House, Beresford Nicholson Estate, Bilotti Group, City Plan Commission, Providence RI. Bookmark the permalink.

9 Responses to Save the carriage house, too