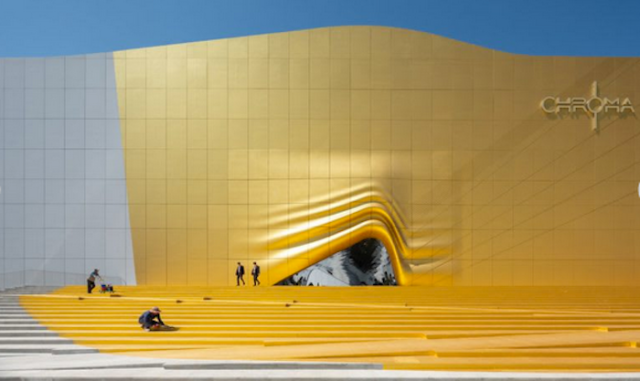 One of two new buildings in an entertainment complex near Seoul. (MVRDV)

First I would like to petition for the creation of a mnemonic device for the name of the Dutch firm MVRDV. You can’t even get it right when you’re looking at it! Okay. So here’s a paragraph from Jesus Diaz’s piece for Fast Company about two buildings designed by MVRDV for an entertainment project near Seoul:

Instead of creating plain box-like structures or, worse, mimicking the artificial grandiosity of a Vegas casino, MVRDV decided to build a surrealist’s wonderland. First, they took the facades of other buildings in the same complex, which is known as Paradise City, a large resort town attached to Incheon International Airport, and digitally “draped” them over the facades of the new buildings – then actually twisted the entire 3D model to give the impression that reality itself was being distorted.

Diaz thinks it looks like something out of a painting by Salvador Dali. Perhaps. The headline uses the word mutant: “These buildings look like mutant 3D models come to life,” and that’s not intended as criticism. Nor do they seem to have “come to life.” No way. To me, one of the buildings looks like Moby Dick – that is, Captain Ahab’s mean white whale from Melville’s novel of the same name. That is intended as criticism. 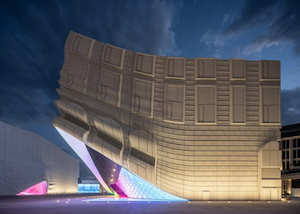 The project’s second building by MVRDV

But take the first quoted sentence above: “Instead of creating plain box-like structures or, worse, mimicking the artificial grandiosity of a Vegas casino … .” Or worse? Does Diaz really think a plain box is better than the alternative he cites? If he was thinking of the Venetian or Paris Las Vegas – both are excellent attempts to mimic the real thing – that would certainly be preferable to a “plain box-like structure.” Or if he is thinking of lesser casino designs in Las Vegas, they’d still be better than a plain box.

Anyhow, the final two buildings in an entertainment/hotel complex of six are completed now, or at least that seems to be what’s implied in Diaz’s article. The illustrations he uses really do look like models, do they not? Here is architect Winy Maas’s description of the plan to integrate entertainment and art with the designs of the complex’s other four buildings:

The [new buildings’] design achieves this by projecting the façades of the surrounding buildings in the complex, which are ‘draped’ over the simple building forms and plazas like a shadow, and ‘imprinted’ as a relief pattern onto the façades. … What, then, is the difference between architecture and art? The project plays with that and I think that abstraction is part of it, but it has to surprise, seduce, and it has to calm down. 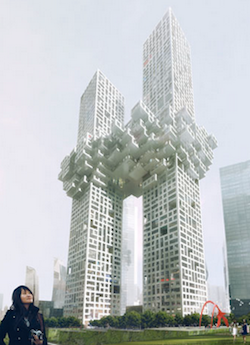 Huh? MVRDV proudly traffics in distorting reality, which can of course be anything the architects want it to be. Do the two buildings really fit into their urban context (if it may be so called)? There is no way buildings like this can possibly fit together as a coherent district within a city. That is not what they are supposed to do, but that is what they ought to do. Beauty as art is intrinsically exciting. Modern architecture is fake beauty. Most architects today do not understand this, and their ignorance of the principle almost mandates that any new building will degrade rather than improve an area, even if the individual buildings are, um, exciting.

A while back NKVD, oops, I meant MVRDV, proposed two residential towers for Seoul that resembled the WTC terrorist attack. Exciting! It then entered denial mode when critics complained of the architects’ insensitivity. In the case of the Seoul Moby Dick and its brother, which looks somewhat like a normal building on acid, who really cares what it looks like? It will not disrupt any beautiful streetscapes. There are none in this fetid vicinity. 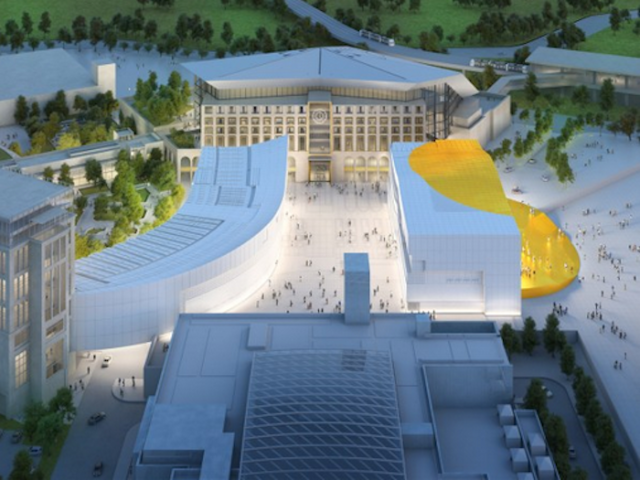 This blog was begun in 2009 as a feature of the Providence Journal, where I was on the editorial board and wrote a weekly column of architecture criticism for three decades. Architecture Here and There fights the style wars for classical architecture and against modern architecture, no holds barred. History Press asked me to write and in August 2017 published my first book, "Lost Providence." I am now writing my second book. My freelance writing on architecture and other topics addresses issues of design and culture locally and globally. I am a member of the board of the New England chapter of the Institute of Classical Architecture & Art, which bestowed an Arthur Ross Award on me in 2002. I work from Providence, R.I., where I live with my wife Victoria, my son Billy and our cat Gato. If you would like to employ my writing and editing to improve your work, please email me at my consultancy, dbrussat@gmail.com, or call 401.351.0457. Testimonial: "Your work is so wonderful - you now enter my mind and write what I would have written." - Nikos Salingaros, mathematician at the University of Texas, architectural theorist and author of many books.
View all posts by David Brussat →
This entry was posted in Architecture and tagged Fast Company, Incheon, Jesus Diaz, Las Vegas, Moby Dick, MVRDV, Salvador Dali, Seoul, South Korea. Bookmark the permalink.