Posted on September 6, 2018 by David Brussat 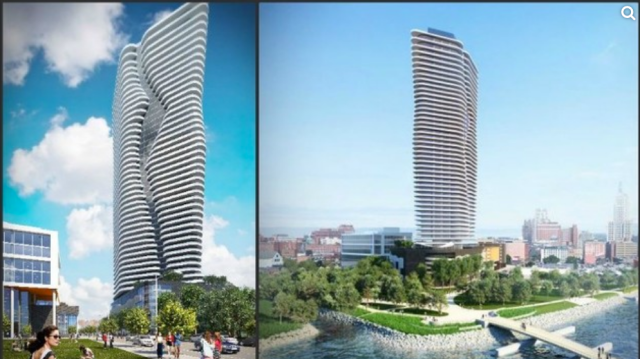 The following is a guest column written by Andrés Duany, a founder of the New Urbanism movement whose planning and design firm, Duany Plater-Zyberk, has been deeply involved in revitalizing downtown Providence since the early 1990s. He writes in opposition to the Hope Point Tower proposed by developer Jason Fane, whose organization is headquartered in Rockefeller Center.

[Update: The City Council voted to send the Fane tower issue back to the Ordinance Committee, which in July opposed raising the height limit from 100 feet to 600 feet. Jason Fane argues that he missed the earlier hearing. Did he forget about it? Does Fane employ nobody who could have spoken in his place? Of course not. Fane bagged the hearing. So, no. The decision to go back to Ordinance was obviously taken by the council in order to delay a crucial vote until after the election. Shame!]

We write with concern not as residents of Providence but among those who have come to know and love this city. Our firm, DPZ, prepared the Downcity Master Plan (1990), and we have been involved ever since, both advising and admiring. The progress has been extraordinary – a step-by-step cultural and financial commitment by the many has aggregated to position Providence as one of the most desirable cities on the East Coast. This very desirability has now catalyzed a proposed highrise, a 600-foot tower that is the object of our urgent concern, as it will add nothing but discord. It is a betrayal of all those who have contributed to the renaissance of Downcity.

This highrise will undermine the collective achievement of four decades, for several reasons:

First, the tower will not become a visual landmark showing the passing world the cultural excellence of this city. Providence has already achieved excellence in dozens of ways. The proposed gigantic art piece is a fraud. The architecture is not original. It is in fact a copy of several similar highrises already built from China to Chicago. The design is the product of mediocre designers and a cynical developer. To the culturally aware it will be seen as a symbol of a persistent provincialism.

Then there is the persistent mystery that this design, which would not pass muster as a second-year project at RISD, is backed by the illustrious professor Friedrich St. Florian – who aligns himself with the exhausted argument that Providence needs a “silver bullet” to be noticed as a front-rank city. That argument is as old as the Seattle Needle of 1962. To fall for this line should be unthinkable at this stage.

Second, this tower is located within a master plan with a height limit of 100 feet in support of the local historical character. Those new buildings which have preciously followed the Master Plan will potentially have their sea breezes blocked, their views stolen, and their windows shadowed. No future developer will then trust or follow the heretofore successful Master Plan.

Approval of this tower will signal a political free-for-all, with every rule seen as an opportunity for wheeling and dealing. Rather than attracting good developers, this situation will repel them, as their investments require a predictable environment and not one that grants subsequent competitors arbitrary and undue advantage.

Third, a building this gargantuan will absorb the market for many years to come. Providence will thus be in the ludicrous circumstance of having one very tall building surrounded by empty lots waiting for development. The newly bloated land prices for potential highrises anywhere in the city will paralyze development. Completion of the waterfront will thus be strangled for many years to come.

Fourth, a building of this size requires a very tall base of parking garages before a lived-in window can be seen. This dead zone is demoralizing from the eye level of the passerby. Yes, those who will live above will have a magnificent view, but at great cost to everyone else, who will confront a dull plug of parking garage.

This highrise is not only hostile to pedestrians’ enjoyment of the streets, it is contemptuous of those who have worked long and hard toward the revival of Downcity. It is parasitic, thriving on the prior work of others while sucking the life out of the existing urbanism for its own delectation and profit.

Approving this tower would be a mistake that cannot be taken back. Those who support it will be surprised when this enormoust alien stands there, unnecessary, uncool, and utterly unloved.

The Providence City Council will vote tonight on the Fane tower project at its regular meeting at 7 p.m. in Council Chambers.

This blog was begun in 2009 as a feature of the Providence Journal, where I was on the editorial board and wrote a weekly column of architecture criticism for three decades. Architecture Here and There fights the style wars for classical architecture and against modern architecture, no holds barred. History Press asked me to write and in August 2017 published my first book, "Lost Providence." I am now writing my second book. My freelance writing on architecture and other topics addresses issues of design and culture locally and globally. I am a member of the board of the New England chapter of the Institute of Classical Architecture & Art, which bestowed an Arthur Ross Award on me in 2002. I work from Providence, R.I., where I live with my wife Victoria, my son Billy and our cat Gato. If you would like to employ my writing and editing to improve your work, please email me at my consultancy, dbrussat@gmail.com, or call 401.351.0457. Testimonial: "Your work is so wonderful - you now enter my mind and write what I would have written." - Nikos Salingaros, mathematician at the University of Texas, architectural theorist and author of many books.
View all posts by David Brussat →
This entry was posted in Architecture, Development and tagged Andres Duany, DPZ, Fane Organization, Fane Tower, Friedrich St. Florian, Hope Point Tower, Jason Fane, Providence RI, Urban Planning, Zoning. Bookmark the permalink.