Signs of a city walkabout 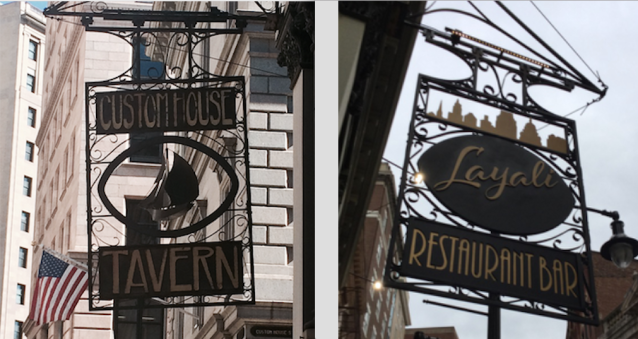 My friend Maria Ruggieri and I went walkabout – as Crocodile Dundee would say – in downtown Providence yesterday evening. We popped into a number of new restaurants, the first being Layali, a restaurant/bar (opened by owners of the late Kartabar on Thayer) where the old Custom House Tavern used to be, a step down from the corner of Weybosset and Custom House streets, across from the U.S. Custom House, completed in 1857 and now headquarters of the state judiciary.

We sat inside and then moved outside to enjoy the gentle breeze at a sidewalk table. I’d passed by several weeks prior and had noticed with regret that the old tavern’s beloved sign had not been replaced. Last night I discovered that it has now been replaced by the same old sign, pleasantly updated for the new restaurant. The elegant iron filigree remains but the oval that used to encircle the cutout of a ship in full sail is now filled in with “Layali” spelled in fine script. Below the oval, the rectangular panel that once read “Tavern”  now reads “Restaurant Bar,” and the rectangle above the oval that once read “Custom House” is gone, replaced by an open rectangle with cutouts of local architecture – a gabled Colonial house, the steeple of the First Baptist Church, the Industrial Trust (“Superman”) Building, the Fleet Center, the Old State House, City Hall, the dome of the “new” State House, and the Biltmore Hotel.

Wow! Very nice! The new sign certainly fills the shoes of the old sign, a landmark of the old, pre-renaissance downtown.

I used to eat at the Custom House Tavern for lunch often during my years working at the Providence Journal. It is in the Equitable Building, flanked by L-shaped Wilcox Building on either side of it, and then the Bank of North America, 1856, by Thomas Tefft, to the right of that on Weybosset, and the Old Colony Bank Building, 1927, to its right. This is the set of buildings that I first saw after dropping off a shirt at the drycleaner – yes, drycleaner! – in the Arcade back in 1984 on my first visit to Providence for a job interview at the Journal. I fell in love with that streetscape, and to this day feel a thrill to the tips of my toes whenever I see it, whether from the west standing in front of the Arcade or from the east, where Weybosset meets Westminster at the end of the bow that the two streets formed until urban renewal took its western end, at Cathedral Square, away from us in 1964.

The interior decor of the tavern was friendlier in the old days, if I recall, more of the ye olde feel, with lots of wood. Today it’s more contemporary, not a lot to make the heart sing. There was talk around town long ago that the building renovation was delayed because of irregularities in the early phases of the work. But hey! A restaurant is now serving in that space again after a vacation (as Buddy Cianci would put it) of all too many years.

Looking east on Weybosset Street from outside the Arcade. (photo by author)

This blog was begun in 2009 as a feature of the Providence Journal, where I was on the editorial board and wrote a weekly column of architecture criticism for three decades. Architecture Here and There fights the style wars for classical architecture and against modern architecture, no holds barred. History Press asked me to write and in August 2017 published my first book, "Lost Providence." I am now writing my second book. My freelance writing on architecture and other topics addresses issues of design and culture locally and globally. I am a member of the board of the New England chapter of the Institute of Classical Architecture & Art, which bestowed an Arthur Ross Award on me in 2002. I work from Providence, R.I., where I live with my wife Victoria, my son Billy and our cat Gato. If you would like to employ my writing and editing to improve your work, please email me at my consultancy, dbrussat@gmail.com, or call 401.351.0457. Testimonial: "Your work is so wonderful - you now enter my mind and write what I would have written." - Nikos Salingaros, mathematician at the University of Texas, architectural theorist and author of many books.
View all posts by David Brussat →
This entry was posted in Architecture, Art and design and tagged Buddy Cianci, Crocodile Dundee, Custom House Tavern, Downtown Providence, Layali, Maria Ruggieri, Providence RI. Bookmark the permalink.

11 Responses to Signs of a city walkabout