“Mutts-have: Architects create luxury kennels for charity auction” is the headline of this story by Guardian critic Oliver Wainwright. “Mutts-have”? … I’m sorry, that really does not cut the mustard. Mutts-have ≠ must-have. And if you glide down the complement of luxury dog houses at auction yesterday in London, you will find that most are far from pooch palaces. The event was actually called the Bow-Wow Haus Auction.

Indeed, most of them either reek of the cutsie-wootsie or stink of the Bauhaus. In short, they are dogs, not kennels. Okay, a few are nice, like the one on top by artist Eileen Goldenberg. The late Zaha Hadid’s office has an entry, which I will refrain from trying to describe. A photo of it is included with the story. To see all of the doghouses, scroll to the end of Wainwright’s story and click on “… more on the kennels here.”

What are we to make of the idea of auctioning off doghouses donated by professional designers? Critic Phineas Harper tried to let the dog out of the bag:

One in every 200 British people is homeless. But it’s okay – because Zaha Hadid Architects have made a bespoke dog kennel to raise money for a pet charity. A pet charity with assets of £60.7 million and an annual income £18.5 million.

Boo-hoo! If not bow-wow! Doubt he cares what the kennels look like. But because we like dogs so much, it is worth noting that, assuming any actual dogs show up to pose with the kennels, the auction was held at the gorgeously restored St. Pancras Renaissance London Hotel. 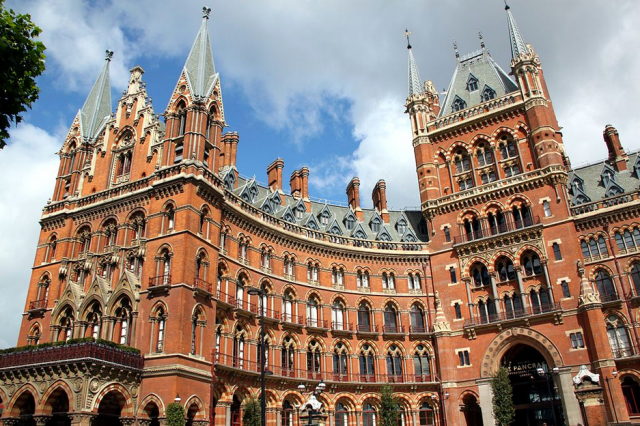 This blog was begun in 2009 as a feature of the Providence Journal, where I was on the editorial board and wrote a weekly column of architecture criticism for three decades. Architecture Here and There fights the style wars for classical architecture and against modern architecture, no holds barred. History Press asked me to write and in August 2017 published my first book, "Lost Providence." I am now writing my second book. My freelance writing on architecture and other topics addresses issues of design and culture locally and globally. I am a member of the board of the New England chapter of the Institute of Classical Architecture & Art, which bestowed an Arthur Ross Award on me in 2002. I work from Providence, R.I., where I live with my wife Victoria, my son Billy and our cat Gato. If you would like to employ my writing and editing to improve your work, please email me at my consultancy, dbrussat@gmail.com, or call 401.351.0457. Testimonial: "Your work is so wonderful - you now enter my mind and write what I would have written." - Nikos Salingaros, mathematician at the University of Texas, architectural theorist and author of many books.
View all posts by David Brussat →
This entry was posted in Architecture and tagged Bauhaus, Bow Wow Haus Auction, Dogs, Kennels, London, St Pancras Renaissance London Hotel, Zaha Hadid. Bookmark the permalink.

1 Response to Wee wow for Bauwauhauses