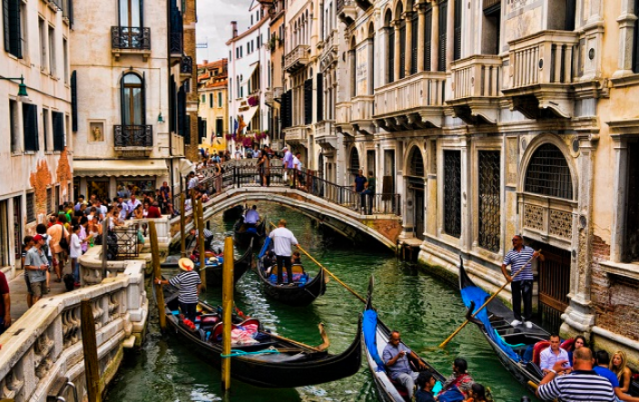 Gondolas on a canal in Venice. (thelocal.it)

In addition to narratives of place in his novels, Henry James wrote much about his personal travels, including visits to Venice, to which I’ve had the pleasure of a single blissful visit. The excerpts I’ve taken from his writing on Venice come from “Italian Hours” in the Library of America edition of his Collected Travel Writings: The Continent. (I also have his volume, in the same set, acquired separately, of writings on Britain and America.) I am indebted the Project Guttenberg, whose existence freed me from the arduous labor of transcribing so much text by hand … so I can quote at length, which is pretty much de regueur with James.

Below are snippets from a long passage on James’s reaction to John Ruskin’s thoughts in his magisterial The Stones of Venice. James, who wrote journals of his travels between 1870 and 1910, had a conflicted relationship with that book, written in 1851-53, when architects were going mano a mano over Gothic and Neoclassical styles (that is, Roman Catholic and Church of England). Whatever its faults may or may not be, Wikipedia quotes Roger Scruton that The Stones of Venice was “the greatest description in English of a place made sacred by buildings.” Well, here goes:

[Ruskin] has indeed lately produced several aids to depression in the shape of certain little humorous—ill-humorous—pamphlets (the series of St. Mark’s Rest) which embody his latest reflections on the subject of [Venice] and describe the latest atrocities perpetrated there. These latter are numerous and deeply to be deplored; but to admit that they have spoiled Venice would be to admit that Venice may be spoiled—an admission pregnant, as it seems to us, with disloyalty. Fortunately one reacts against the Ruskinian contagion, and one hour of the lagoon is worth a hundred pages of demoralised prose.

This queer late-coming prose of Mr. Ruskin … appears addressed to children of tender age. It is pitched in the nursery-key, and might be supposed to emanate from an angry governess. It is, however, all suggestive, and much of it is delightfully just. There is an inconceivable want of form in it, though the author has spent his life in laying down the principles of form and scolding people for departing from them; but it throbs and flashes with the love of his subject—a love disconcerted and abjured, but which has still much of the force of inspiration.

Among the many strange things that have befallen Venice, she has had the good fortune to become the object of a passion to a man of splendid genius, who has made her his own and in doing so has made her the world’s. There is no better reading at Venice therefore, as I say, than Ruskin, for every true Venice-lover can separate the wheat from the chaff. The narrow theological spirit, the moralism à tout propos, the queer provincialities and pruderies, are mere wild weeds in a mountain of flowers.

One may doubtless be very happy in Venice without reading at all—without criticising or analysing or thinking a strenuous thought. It is a city in which, I suspect, there is very little strenuous thinking, and yet it is a city in which there must be almost as much happiness as misery. The misery of Venice stands there for all the world to see; it is part of the spectacle—a thoroughgoing devotee of local colour might consistently say it is part of the pleasure.

The Venetian people have little to call their own—little more than the bare privilege of leading their lives in the most beautiful of towns. Their habitations are decayed; their taxes heavy; their pockets light; their opportunities few. One receives an impression, however, that life presents itself to them with attractions not accounted for in this meagre train of advantages, and that they are on better terms with it than many people who have made a better bargain. They lie in the sunshine; they dabble in the sea; they wear bright rags; they fall into attitudes and harmonies; they assist at an eternal conversazione.

I have made allowances for the patience of the modern reader by dividing James’s long paragraph (just over half of it quoted above) into five teeny weeny little paragraphs. … Okay, okay. I will run the rest of the paragraph (and maybe divide it up into three or four paragraphs. No one will accuse me of looking down Henry James’s nose at my readers!

It is not easy to say that one would have them other than they are, and it certainly would make an immense difference should they be better fed. The number of persons in Venice who evidently never have enough to eat is painfully large; but it would be more painful if we did not equally perceive that the rich Venetian temperament may bloom upon a dog’s allowance. Nature has been kind to it, and sunshine and leisure and conversation and beautiful views form the greater part of its sustenance.

It takes a great deal to make a successful American, but to make a happy Venetian takes only a handful of quick sensibility. The Italian people have at once the good and the evil fortune to be conscious of few wants; so that if the civilisation of a society is measured by the number of its needs, as seems to be the common opinion to-day, it is to be feared that the children of the lagoon would make but a poor figure in a set of comparative tables. Not their misery, doubtless, but the way they elude their misery, is what pleases the sentimental tourist, who is gratified by the sight of a beautiful race that lives by the aid of its imagination.

The way to enjoy Venice is to follow the example of these people and make the most of simple pleasures. Almost all the pleasures of the place are simple; this may be maintained even under the imputation of ingenious paradox. There is no simpler pleasure than looking at a fine Titian, unless it be looking at a fine Tintoret or strolling into St. Mark’s,—abominable the way one falls into the habit,—and resting one’s light-wearied eyes upon the windowless gloom; or than floating in a gondola or than hanging over a balcony or than taking one’s coffee at Florian’s. It is of such superficial pastimes that a Venetian day is composed, and the pleasure of the matter is in the emotions to which they minister. These are fortunately of the finest—otherwise Venice would be insufferably dull.

Reading Ruskin is good; reading the old records is perhaps better; but the best thing of all is simply staying on. The only way to care for Venice as she deserves it is to give her a chance to touch you often—to linger and remain and return.

Back in 2005, Victoria and I sat for a while in seats of lush maroon velvet at Florian’s, which still famously exists. I can’t recall what we sipped, and I had a hard time not thinking of the Austrian-born Providence architect Friedrich St. Florian. This was not long after his National World War II Memorial opened on the Mall in Washington. Ah! Beautiful! … But maybe not as beautiful as Venice.

Since not too long ago I reviewed Salvatore Settis’s If Venice Dies, which makes much of how almost nobody who lives in Venice works at anything but catering to those who visit Venice, I must add one lengthy phrase from a later paragraph:

… [T]he vexatious sense of the city of the Doges reduced to earning its living as a curiosity-shop … .

It seems that Venice has survived being a curiosity shop for centuries. Maybe only its visitors fail to understand that the Venetians might enjoy it – those who can still afford to live there!

This blog was begun in 2009 as a feature of the Providence Journal, where I was on the editorial board and wrote a weekly column of architecture criticism for three decades. Architecture Here and There fights the style wars for classical architecture and against modern architecture, no holds barred. History Press asked me to write and in August 2017 published my first book, "Lost Providence." I am now writing my second book. My freelance writing on architecture and other topics addresses issues of design and culture locally and globally. I am a member of the board of the New England chapter of the Institute of Classical Architecture & Art, which bestowed an Arthur Ross Award on me in 2002. I work from Providence, R.I., where I live with my wife Victoria, my son Billy and our cat Gato. If you would like to employ my writing and editing to improve your work, please email me at my consultancy, dbrussat@gmail.com, or call 401.351.0457. Testimonial: "Your work is so wonderful - you now enter my mind and write what I would have written." - Nikos Salingaros, mathematician at the University of Texas, architectural theorist and author of many books.
View all posts by David Brussat →
This entry was posted in Architecture and tagged Friedrich St. Florian, Henry James, If Venice Dies, John Ruskin, Library of America, Project Gutenberg, Salvatore Settis, Stones of Venice, Venice. Bookmark the permalink.

3 Responses to James on Ruskin’s Venice