I have just completed Lytton Strachey’s Eminent Victorians without finding much if anything to quote about architecture beyond what I conveyed in my post “The special beauty of decay.” Strachey contemplates four Victorians – Cardinal Manning, Florence Nightingale, Thomas Arnold (headmaster of Rugby) and Gen. Charles Gordon. He digs with an almost unseemly gleeful diligence for the hypocrisy embedded in the character of each. 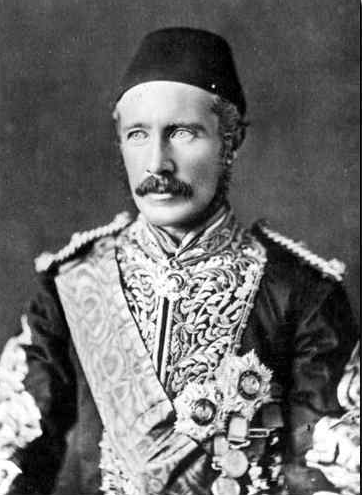 The last, Charles George Gordon, was beheaded after the siege of Khartoum by the forces of the Mahdi (emissary of Mohammad). In the absence of anything especially architectural in the description of the end of Gordon’s life, I looked for an image of the palace where, at the top of its staircase, he received a spear in the chest (or was hacked to bits by scimitar, believe what you will). Not long after, his head was chopped off and stuck atop a pole. I found the palace (see below). I went to the library to find the 1966 movie Khartoum, starring Charleton Heston and Sir Laurence Olivier, but it was out. (You can see the trailer here). But I did find, online, a startling but sad and predictable shot of Khartoum.

Before considering that image, consider the following from an essay on contemporary Khartoum after the civil war that split Sudan and South Sudan into two nations. I wonder whether Nesrine Malik, the UK Guardian columnist and author of “Khartoum: the most selfish city?,” was referring to the Mahdi’s investment of Khartoum in 1885 in the opening line of this passage toward the end of her essay. She writes:

Rebel movements have twice approached and once entered Khartoum, an unthinkable prospect for its dwellers. There is a sense that the hordes are closing in, and that decades of grievances and marginalisation will finally close in and cannibalise a centre of power that has got away with divide, marginalise and rule for too long. Almost 60 years after independence, the model of the elitist city has proven to be a catastrophic failure.

Who knows? But from the photograph of contemporary central Khartoum above, it is clear that the hordes have already closed in. Look at all the bad trad poking up among the earlier modernist buildings! But must one not admit that even the bad trad, in its attempts to at least make reference to Muslim architectural traditions, has served Khartoum by defending it against being invested (that is, in Victorian terminology, conquered) by more typical sorts of modern architecture? Deny it – I dare you!

Interesting also is a story from the Middle East Eye, “New presidential palace opened on resonant date for Sudan,” about the new presidential palace built in Khartoum right next to the old one, where General Gordon died, which was not torn down. The author, who is not named in the article, discusses not only the new palace but the fact that it was financed, as is so much in Sudan these days, by the Chinese, who are heavily invested in Sudanese oil drilling operations. And he points out that the opening came on the same day, 130 years later, that Gordon lost his head.

It seems as if the author was quite unaware that Gordon’s nickname was “Chinese.” That would be worth putting in the article, ya think? Journalists tend to go weak in the knees at any hint of irony that they can pop into their stories. The anonymous author missed a biggie here.

Chinese Gordon was so named because of his prowess in military strategy and tactics and the courage he showed in China during the 1860s when, as a sort of British mercenary, he led the Chinese regulars – the so-called “Ever Victorious Army” – in defeating the Taiping Rebellion.

Internet images and their descriptions of the Khartoum palace in which Gordon died are so confused (or at least to me at 10:38 p.m. this evening) that I cannot tell whether the photo below is the original palace, the palace as rebuilt after the British retook Khartoum more than a decade later, a replica of the original palace apparently built by the Chinese, or the new palace recently also built by the Chinese as referred to above. If a reader knows, please tell me!

This blog was begun in 2009 as a feature of the Providence Journal, where I was on the editorial board and wrote a weekly column of architecture criticism for three decades. Architecture Here and There fights the style wars for classical architecture and against modern architecture, no holds barred. History Press asked me to write and in August 2017 published my first book, "Lost Providence." I am now writing my second book. My freelance writing on architecture and other topics addresses issues of design and culture locally and globally. I am a member of the board of the New England chapter of the Institute of Classical Architecture & Art, which bestowed an Arthur Ross Award on me in 2002. I work from Providence, R.I., where I live with my wife Victoria, my son Billy and our cat Gato. If you would like to employ my writing and editing to improve your work, please email me at my consultancy, dbrussat@gmail.com, or call 401.351.0457. Testimonial: "Your work is so wonderful - you now enter my mind and write what I would have written." - Nikos Salingaros, mathematician at the University of Texas, architectural theorist and author of many books.
View all posts by David Brussat →
This entry was posted in Architecture and tagged Charles Chinese Gordon, Eminent Victorians, Khartoum, Lytton Strachey, Sudan, The Guardian. Bookmark the permalink.