Philip Langdon’s new book Within Walking Distance, published by Island Press, uses six examples of walkable communities to show how they are made. No, unfortunately they do not arise spontaneously, at least not anymore, not since the postwar era, in America, of modern city planning and architecture. Although many municipal planning offices have embraced at least the rhetoric of the New Urbanism (the old urbanism renewed), and sing the praises of Jane Jacobs and her streetsmart urbanism, most cities and towns still retain laws and regulations that make it harder to generate neighborhoods people will naturally want to inhabit. 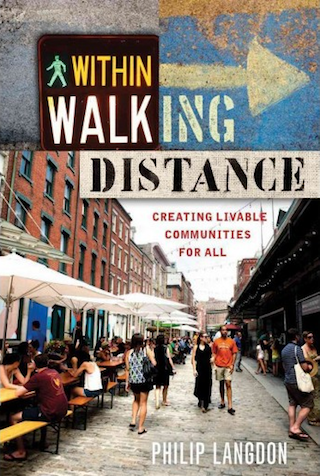 Langdon takes as his exemplars of walkability a series of neighborhoods in Philadelphia, New Haven, Chicago, Portland, Brattleboro, Vt., and the “Cotton District” in Starkville, Mississippi. The chapters examine the history of each district, and the cooperation among their inhabitants that went into bringing about, protecting and improving upon the qualities that make the six neighborhoods so livable.

The stories behind their success amount to an education in placemaking, and Langdon – who edited the CNU’s New Urban News for years – tells those tales with a gentle eye toward the extraordinary people who made it happen. The author has a firm grasp of the principles and stratagems that promote walkability, which itself is key to places that are livable and lovable. The book distills them admirably, and so beyond noting this fact I will limit my own comments to highlighting the importance Langdon places on traditional architecture as another such key to walkable places.

For example, in the Northern Liberties neighborhood near the city center in Philadelphia, he cites the Piazza at Schmidt’s (site of a former brewery) as a lost opportunity for commercial development there. He writes:

“Transformational projects” aimed at radically reshaping neighborhoods and revolutionizing their images have been launched in countless U.S. cities since the 1950s. Sometimes they have succeeded, but often they have succumbed to what [Bryn Mawr professor Matt] Ruben calls “a monoculture,” to being “dominated by a certain vibe.” Rundown areas do need new energy, but in most cases a better strategy is to work in a more organic fashion, with smaller increments of development and with close attention to neighborhood context.

A couple of streets, Livingston and Everit, had blocks that stretched on for more than a third of a mile. From a pedestrian perspective, that would ordinarily be a problem, but those two 1,900-foot blocks had such beautiful early twentieth century houses that I rarely minded the length.

Langdon goes full archiporn in his description of the streets of Brattleboro, a town I was smitten by when I first visited in 2013. His vivid language suggests his love for the kinds of buildings people actually do love, and the frequency of architectural style in his book suggests its vital role in giving streets a head start toward the goal of walkability.

Straight ahead is a jewel box of a building, three stories high and three bays wide, all dressed up with neoclassical accoutrements: fluted pilasters, lintels with keystones, and windows subdivided into small panes. Nearby are buildings with vigorously indented cornices or parapets, meeting the sky with strength and dignity.

In his chapter on Portland, widely considered the bigger American city that has made the greatest strides toward livability, Langdon clearly enjoys discussing its Pearl District, of which he is so enchanted that he chides its northern sector for going off-message.

As development moved north, there was less context to relate to, and many of the new buildings adopted more contemporary styling. With simple, straightforward shapes, smooth walls, and little or no applied ornament, many of them did not feel as rich or idiosyncratic as the best of the old buildings, but they made a decent backdrop to the streets. …

Langdon quotes a neighborhood planning advocate as saying that after the last recession, “the city was hungry for just anything to get built. You can really feel the difference between the old neighborhood that has context versus the area to the north.”

Langdon quotes a local architect and association member as saying “We want some bolder architecture.” Portland’s planners were listening. An example of what resulted is the Cosmopolitan, at 28 stories of reflective glass the tallest building in Portland. When it opened in 2013, some people were “elated.” Others not so much. Langdon quotes a Rollins College professor, Bruce Stephenson, as saying he “detests” it: “It sticks out. It doesn’t fit in. The glare from it is such a blinding light. … It eviscerates the view you want to have. It destroys any sense of visual continuity.”

Let me take a wild guess that Stephenson is not an professor of architecture!

Langdon quotes an essay in Planetizen by one of the nation’s leading urbanists, Michael Mehaffy, about this wrong turn in the development of the Pearl. Mehaffy, who founded the urbanist think tank Sustasis, wrote:

[I]nstead of clear, predictable form-based codes that guide development to blend sensitively with the scale of its neighbors and mitigate its impacts, the city imposes a subjective game of “impress the design panelists” and “who’s the best renderer” – for drawings that are famously unlike the built result. … Architecture has become a novelty machine, in which the name of the game is to be exciting and dramatic and different – or at any rate like the latest fashion, which is different from the previous fashion, whatever that is. But this is not a problem-solving approach; it’s a novelty-for-novelty’s-sake approach.

Mehaffy has put his finger on one of the broader problems, but while Langdon seems to agree, he nevertheless states: “In the Brewery Blocks, one of the most outstanding developments in the district, new Modern structures and decades-old brick buildings make a dynamic combination.”

Oh? So which is it going to be? The one weakness of Langdon’s book may be that it makes no attempt to suggest a solution to the problem identified by Mehaffy. In my opinion, the solution has as much to do with coordination among local residents as it does in other aspects of neighborhood creation, whose procedures are fully addressed in the book.

The most curious and fascinating of Langdon’s examples is the Cotton District, near the Mississippi State University campus in the college town of Starkville, Miss. It is the long-term project of one man, Dan Camp, a former shop teacher who has pretty much built the neighborhood from scratch by himself. He has a small staff, but it is inspired by Camp, who seems to be a one-man McKim, Mead & White. All of the hundred or so buildings in the Cotton District are classical, often leaning toward the vernacular but always, it seems, slightly off, sometimes purposely so, and with marvelous results.

Architect and planner Sara Hines sent me some pictures of the Cotton District three years ago and was I astonished! I’d never heard of it before. I posted on it, running Hines’s photos, about three days after I lost my job at the Providence Journal. My blog lit up like a switchboard, with thousands of hits coming in from readers of “The Cotton District.” I still have no idea why. Maybe it was because I wrote this:

The permitting and design approval process drives developers nuts in so many places, including Providence, because in most places planning officials do not learn. They do not learn that if developers build what people like, permitting goes down like an oyster. They prefer, for some reason, to build junk, and when resistance arises, they slog through the permitting process and then go home and cry into their beer.

Over the decades, Camp has learned that he’s had an easier and easier time with the planning apparatchiks in Starkville (especially, I suppose, when he was its mayor) as they come to understand his earnest desire to build what people like. He wrote about that on the Cotton District’s website and I picked up on that in my post. Now Langdon picks up on it, sort of, in his book. The passage, if inverted, simply says “Build nice buildings”:

Modernism promulgated the idea that buildings can be designed “from the inside out,” letting the needs of the interior determine the nature of the exterior. For architects, this concept was liberating, but it frequently had the unintentional result of harming the public realm.

I’m not sure how unintentional it was. But of course the average modernist architect does not purposely harm the public realm. Today’s architects are (almost) completely innocent of the philosophy upon which modernism (architectural and otherwise) rests. But what Camp has learned over the decades of his Cotton District project is that it gets easier and easier to handle the local permitting bodies once they understand that you are trying to build things people will actually like. This makes officials look good, as if they are actually doing their jobs, and they appreciate that. But of course you actually do have to try designing buildings that people will like. It’s not rocket science, but it is also not the conventional wisdom.

A few years ago I reviewed Street Design: The Secret to Great Cities and Towns, by Victor Dover and John Massengale. Their fine book collected, assessed and ranked all the principles and instructions involved in making great streets, but here is the secret: you make great streets by lining them with great buildings. Within Walking Distance has pretty much the same charm. Its principles and instructions are valid, but they are secondary. Line the streets of a neighborhood with lovable buildings and it will be – presto, chango! – a walkable neighborhood. The principle could be enunciated in about three pages, but books three pages long often go unpublished. So most authors would rather take it a few steps further. I think in his heart Philip Langdon understands this perfectly well, and that is why his book is so good.

This blog was begun in 2009 as a feature of the Providence Journal, where I was on the editorial board and wrote a weekly column of architecture criticism for three decades. Architecture Here and There fights the style wars for classical architecture and against modern architecture, no holds barred. History Press asked me to write and in August 2017 published my first book, "Lost Providence." I am now writing my second book. My freelance writing on architecture and other topics addresses issues of design and culture locally and globally. I am a member of the board of the New England chapter of the Institute of Classical Architecture & Art, which bestowed an Arthur Ross Award on me in 2002. I work from Providence, R.I., where I live with my wife Victoria, my son Billy and our cat Gato. If you would like to employ my writing and editing to improve your work, please email me at my consultancy, dbrussat@gmail.com, or call 401.351.0457. Testimonial: "Your work is so wonderful - you now enter my mind and write what I would have written." - Nikos Salingaros, mathematician at the University of Texas, architectural theorist and author of many books.
View all posts by David Brussat →
This entry was posted in Architecture, Urbanism and planning and tagged Andres Duany, CNU, Congress of the New Urbanism, Cotton District, Dan Camp, John Massengale, Michael Mehaffy, Neighborhoods, New Urbanism, Pedestrians, Philip Langdon, Victor Dover, Walking, Within Walking Distance. Bookmark the permalink.

2 Responses to “Within Walking Distance”