From “Batman: Death by Design.” (Drawing by Dave Taylor)

As I was searching for the original photo of old Penn Station hanging at the existing Penn Station, shown by Max Page at the Providence Preservation Society’s symposium on Friday, I stumbled across this hilarious cartoon on batmangotham city.net. It is from Chip Kidd’s graphic novel Batman: Death by Design, in which Batman plans to demolish Penn Station so he can build an auxiliary Batcave beneath a new terminal designed to resemble a whale. Read the dialogue bubble. It sounds just like the hogwash of a modernist architect’s presentation to a client. Very funny, if not downright poignant.

I am reading the post about Kidd’s take on Penn Station and here is a quotation where he describes his experience of the existing station:

[A]s somebody who takes Amtrak a lot, I’m always in and out of Penn Station and it’s an absolute travesty. Basically – for one of the most active travel hubs on the east coast of the United States – it’s more or less is a fluorescent-lit airless basement below Madison Square Garden, and it’s just horrible. And almost as a cruel joke, when you’re down there, up on the grimy tiled walls they have these pictures of the old Penn Station – this big, glorious space. They’re hanging around on the walls practically mocking you with how beautiful it used to be, as opposed to how shitty it is now.

I wonder whether he realizes there’s a serious and realistic proposal by architect Richard Cameron to rebuild the old Penn Station.

Don’t know whether Batman actually does demolish Penn Station in the novel. I am just now reading the post. I did not even come up with the photo Max Page showed, but I did find one like it at a website called The Still Room, way down in my Google search. It is below: 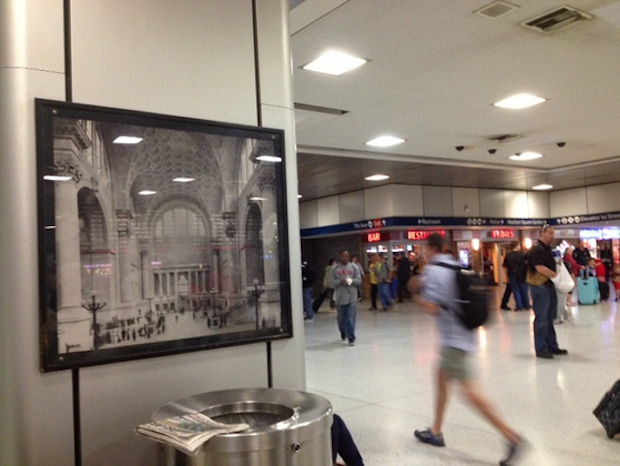 This blog was begun in 2009 as a feature of the Providence Journal, where I was on the editorial board and wrote a weekly column of architecture criticism for three decades. Architecture Here and There fights the style wars for classical architecture and against modern architecture, no holds barred. History Press asked me to write and in August 2017 published my first book, "Lost Providence." I am now writing my second book. My freelance writing on architecture and other topics addresses issues of design and culture locally and globally. I am a member of the board of the New England chapter of the Institute of Classical Architecture & Art, which bestowed an Arthur Ross Award on me in 2002. I work from Providence, R.I., where I live with my wife Victoria, my son Billy and our cat Gato. If you would like to employ my writing and editing to improve your work, please email me at my consultancy, dbrussat@gmail.com, or call 401.351.0457. Testimonial: "Your work is so wonderful - you now enter my mind and write what I would have written." - Nikos Salingaros, mathematician at the University of Texas, architectural theorist and author of many books.
View all posts by David Brussat →
This entry was posted in Architecture, Books and Culture and tagged Batman, Chip Kidd, Clem Labine, Graphic Novel, Jonah and the Whale, Max Page, Modern Architecture, Penn Station, Providence Preservation Society, Richard Cameron, Traditional Building. Bookmark the permalink.