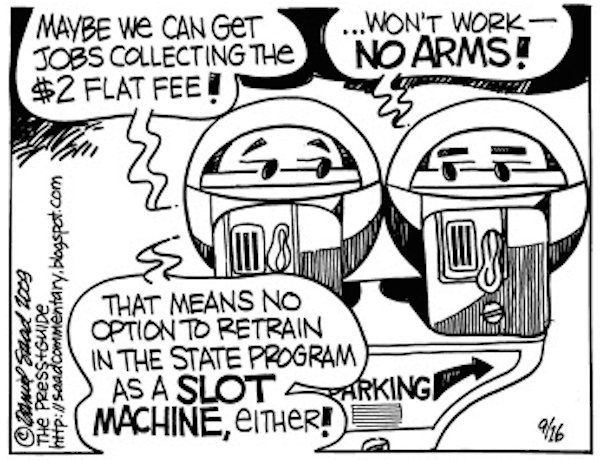 Parking meters on blocks of shops in Providence are not only purging business. It seems as if lovely Rita the Meter Maid may be going the way of the Dodo. I hope not.

Friday I drove downtown to shoot the famous napkin that got the Providence renaissance really going. Architect Friedrich St. Florian safeguards it as a relic of civic revitalization. His office is in the beautiful Francis Building, built in 1894. My gorge rose, however, as I puttered down Westminster in search of a parking space, and realized it was Park(ing) Day. Spaces that I might have parked in were occupied by temporary “parklets” with young people lounging in chairs next to potted plants, chatting amongst themselves, listening to music and taking up perfectly good parking spaces. The idea, I think, is to promote carlessness, a laudable goal. I went carless by choice in 1999-2004, when I was living in a loft downtown, with a great view between City Hall and the Old Journal Building, before I found a wife, had a kid and moved in 2010 to the East Side. (“You can’t raise a child without a backyard!” everyone said. “Manhattan, anyone?” was my feckless reply). Carlessness was truly great, and I’d do it again in a heartbeat. But I am a Rhode Islander. Do I not have the right to park within 50 feet of my destination?

My bile soon evaporated, however, when I found a parking space right next to a parklet. And it was free. There was no meter at all. Yesterday we visited the chalk sketchings at the skating rink. We found free parking on Exchange Terrace. But it was not really free. Someone had already paid and left with almost an hour on the meter. The meter ahead of us had even more time on it, but we did not realize that until after leaving the car.

Maybe that was because they had the same problem I sometimes have. On those rare occasions when I cannot find a “free” spot and have no quarters, I use my debit card to feed the meter. But I can’t figure out how to adjust the time I want to an amount below the $2.50 max. So I end up ripping myself off. But don’t worry: I blame Mayor Elorza.

These random parking thoughts remind me that a friend recently reminded me of the post I’d written, “The parking idiocy,” after Kenneth Dulgarian had written a Journal oped slicing up the city’s campaign to meter every parking space in the city. Downtown has lost all too many buildings over the years to parking lots, driving people out of town. If things had kept going that way, the only reason to go downtown would have been to park your car. Blessedly, the city had an unofficial moratorium on tearing down major buildings for parking. The moratorium lasted a quarter of a century, ending in 2005 under Mayor Cicilline, who virtually declared open season on old buildings, giving us five more “temporary” parking lots. Mayor Elorza seems to have the same cracked idea of city building. It is sometimes difficult for public officials to adventure beyond their first thought on a policy issue: Thought No. 1: Install meters to raise revenue! Got it. Thought No. 2: Piss people off and empty the city! That thought never gets thought: the unthinkable.

It appears that the parking meters are driving away business on Thayer Street, where they were installed not long ago. There are now 15 empty storefronts there, and spending at local shops and eateries seems to be down 40 to 70 percent, according to the estimate of my diligent friend. Wayland Square got meters in spite of stiff opposition. Federal Hill got them a while back. Wickenden Street has successfully fought off meters – so far. Upper Hope Street, near where I live, has seen the prospect of meters loom and then fade. For how long, nobody really knows. A parking-meter crusade must be carried out with a certain political deftness, but the city’s campaign seems to pit neighborhood against neighborhood. Are meters in Olneyville next?

There is also evidence that the meters cost so much to administer and maintain that the revenue they raise may be minimal, and probably not worth the angst or the suppression of business (and ultimately tax revenue). Regarding the Journal’s Sept. 6 story “On Thayer Street is the city’s busiest parking meter,” my friend writes: “Projo story today uses slanted numbers.  Cost does not include tax loss from failing business, meter maids and fmen [?] salaries and bennies, repair, and further loss of [city’s] business-friendly reputation.” My own experience with the meters suggests as much.

Some people think meters are good because they increase the incentive to walk or take public transit. And there is truth to that. But the city would probably thrive better under a regime of both free street parking and free public transit. Meter maids would walk around doing what they used to do, marking tires to make sure nobody parks for more than two hours, so that the free parking would not be snapped up by all-day parkers. The cost of free street parking and free public transit would ultimately be covered by the revenues of a city thriving on all nine cylinders. There would be a trial run, and people would flood in with the hope of proving that free parking and transit is good for business. People would have to squish into the city, and more would want to live there instead of having to drive in.

After all, heavy traffic is the sort of problem every city wants to have: It is the signature of success.

On Thayer, Dulgarian has finally removed from his theater marquee the call to sign a petition against the meters, which has so far garnered thousands of John Hancocks. I am glad we are back to movie titles on the marquee. If the Avon’s patronage has gone down of late, was it because of parking meters or because people couldn’t drive by to find out what was playing? Still, good on him for taking a stand, possibly at his own expense.

This just in! GoLocalProv.com reports that Mayor Elorza’s staff advance car was booted on Eddy Street behind City Hall. (The grayish building in the middle distance is the Smith Building where I lived on the fifth floor from 1999 to 2010.)

This blog was begun in 2009 as a feature of the Providence Journal, where I was on the editorial board and wrote a weekly column of architecture criticism for three decades. Architecture Here and There fights the style wars for classical architecture and against modern architecture, no holds barred. History Press asked me to write and in August 2017 published my first book, "Lost Providence." I am now writing my second book. My freelance writing on architecture and other topics addresses issues of design and culture locally and globally. I am a member of the board of the New England chapter of the Institute of Classical Architecture & Art, which bestowed an Arthur Ross Award on me in 2002. I work from Providence, R.I., where I live with my wife Victoria, my son Billy and our cat Gato. If you would like to employ my writing and editing to improve your work, please email me at my consultancy, dbrussat@gmail.com, or call 401.351.0457. Testimonial: "Your work is so wonderful - you now enter my mind and write what I would have written." - Nikos Salingaros, mathematician at the University of Texas, architectural theorist and author of many books.
View all posts by David Brussat →
This entry was posted in Providence, Urbanism and planning and tagged Ken Dulgarian, Mayor Elorza, Parking, Parking Lots, Parking Meters, Providence RI, Public Transit, Urban Planning. Bookmark the permalink.