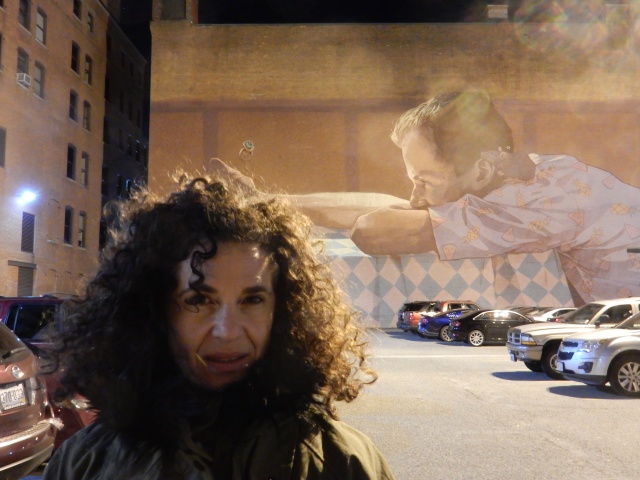 On a clear, modestly chilly evening that just about defines New England in November, hundreds were out on the streets of downtown Providence. No doubt thousands more were inside on the seats of downtown’s robust round-robin of local restaurants and nightclubs.

A good time was had by all, including me and my friend Maria on patrol, on walkabout, on the streets and seats of the town. Walkabout is the name, from the Australian outback, that we use to describe our now-and-then forays into downtown, where we were once neighbors in lofts 501 and 401 at the Smith Building – the first of Buff Chace’s building rehabs that have done more than anything else to revive the Downcity dream.

Maria Ruggieri, entrepreneur, ace jewelry designer (now there’s a Ro Dilan gal for ya!), founder of the late, great Downtown Neighborhood Alliance and for years the most outspoken member of the board of the PDID, the city’s downtown improvement district: A native of Cranston, she now lives on Broadway in the city’s West End, while I now live with my family on the northernmost reaches of the Far East Side. 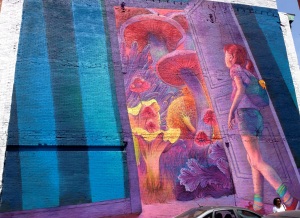 It was during Maria’s sojourn upon the august PDID board that she was first to propose the murals that now grace the blank walls of buildings facing downtown parking lots – turning them occasionally into outside party rooms. I’m not so sure that I would any longer prefer, as was once my longstanding gospel, to have painted strictly architectural murals of trompe l’oeil façades on the same walls. They would’ve been excellent. But today the huge people in these murals generate awe, and certainly bring an inspirating sense of place to otherwise quotidian urban settings.

So all hail these works of art and their creators, gathered organizationally under the umbrella of an urban arts group called The Avenue Concept. The mural of the young man with his hand outstretched as a rat whispers in his ear is by Betz of the Etam Cru (parse that as you wish). The mural of Alice entering Mushroomland, facing the Betz mural across a parking lot owned by former mayor Joseph Paolino, is by Natalia Rak.

Maria and I wandered around, seeking the vacant streetscapes and empty eateries that one might expect after reading some recent commentators (such as one in the Providence Journal by Mary Ann Sorrentino, whose pessimism I debunked a while back in “Providence’s renaissance“).

Instead we found streets vibrant with people having fun. This was not Times Square, but anyone familiar with Manhattan knows that many of its streets are silent even on the most pleasant evenings. Not even New York is Times Square all the time.

We saw no empty restaurants downtown and most were crowded. We popped into then out of the new Italian restaurant, Rosalina, on Aborn Street, where Revolution used to be, next to Gracie’s. We finally chowed down at Providence Coal Fired Pizza in the Conrad Building on Westminster. One of the most lovely streets in the Western Hemisphere was at its best, lit by its long strings of tiny bulbs above the street, and animated by plenty of bustle. We barged into a private party at the Arcade, celebrating the Coffee Exchange and New Harvest Coffee & Spirits and chatted up our old neighbor Erminio Pinque, founder and leader of the Big Nazo Puppets across Eddy from the Smith. The Dean Hotel, on Fountain Street in the old Sportsman’s Inn, where we dipped into the Germanic biergarten Faust for a nightcap, was a hive of people on the way in and out, having a great time, living the “Downcity Dream” that even I long spoke of half in jest. No longer!

And so, on our walkabout, we too relived the Downcity Dream.

This blog was begun in 2009 as a feature of the Providence Journal, where I was on the editorial board and wrote a weekly column of architecture criticism for three decades. Architecture Here and There fights the style wars for classical architecture and against modern architecture, no holds barred. History Press asked me to write and in August 2017 published my first book, "Lost Providence." I am now writing my second book. My freelance writing on architecture and other topics addresses issues of design and culture locally and globally. I am a member of the board of the New England chapter of the Institute of Classical Architecture & Art, which bestowed an Arthur Ross Award on me in 2002. I work from Providence, R.I., where I live with my wife Victoria, my son Billy and our cat Gato. If you would like to employ my writing and editing to improve your work, please email me at my consultancy, dbrussat@gmail.com, or call 401.351.0457. Testimonial: "Your work is so wonderful - you now enter my mind and write what I would have written." - Nikos Salingaros, mathematician at the University of Texas, architectural theorist and author of many books.
View all posts by David Brussat →
This entry was posted in Architecture, Architecture History, Art and design, Preservation, Providence, Uncategorized, Urbanism and planning and tagged Buff Chace, Downcity, Downtown Nieghborhood Alliance, Downtown Providence, Maria Ruggieri, Mary Ann Sorrentino, Murals, Providence Arcade, Providence Downtown Improvement District, Rosalina, The Avenue Concept, Ti Adoro. Bookmark the permalink.

2 Responses to Our Downcity walkabout