Not sure why I’ve decided to inflict on readers this old post from October 2015 on the day before the day before Christmas. It came to mind after a reader, intent on humoring me or torturing me, sent me a photograph of a yacht supposedly designed by the late Dame Zaha, forcing my native fairness to argue that just because a yacht is designed by a modernist architect doesn’t mean it must be ridiculous. The Foggy, designed by Frank Gehry, is a case in point. The article on it by Esquire is priceless. By the way, I guess Zaha’s boat is a yacht while Gehry’s is a sailboat. The same critical principles apply.

Esquire magazine reports that Frank Gehry has designed a sailboat: “Frank Gehry’s First-Ever Yacht Is His Latest Architectural Wonder.” The wonder is that it looks like a sailboat. Water enforces certain constraints on design that land seemingly does not. A secondary wonder, arising from those constraints, is that the boat is lovely. A tertiary wonder is that its Gehryesque facets and ornaments are also alluring, mostly, in their own funny way.

But the article – by Vicky Ward, who is the “significant other” of developer Richard Cohen, who commissioned the vessel – may be more revealing about the process of designing a boat with Gehry than was intended.

Gehry was assisted in the design by Germán Frers, a well-known nautical engineer from Argentina, who no doubt struggled to ensure that the boat would float. Architect Joel Pidel remarked on TradArch that “hopefully it leaks less than his buildings.” Ward quotes Gehry speaking sensibly of the project, and then quotes Frers on the difficulty of working with Gehry:

“Don’t let me go too crazy,” Gehry told Frers. “The boat has to work.” As instructed, Frers pushed back on Gehry’s plan for the vessel to have a flat, cabinless deck, which led to the choice of a curved “crown.”

However, when it came to choosing the material for the hull lining, Gehry and Frers drifted apart. Ever concerned with speed, Frers had proposed carbon fiber, the light, brittle material commonly used for racing boats. But Gehry wanted to line the boat with wood, partly because of “boat lore,” partly because he simply loves wood. Frers got a sinking feeling when he heard this, since wood adds weight without function. “I almost gave up hope the project would get done,” he says. 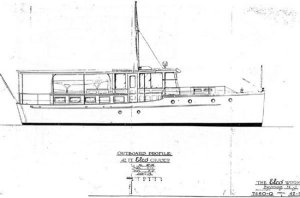 Yacht of Senator Chapman in “The Final Countdown.” (aircraftresourcecenter.com)

Leaving aside the constraints that context – water – imposes on boat design, Gehry’s desire to coat the boat in wood is responsible for its elegance. I have always been a sucker for wooden boats. I want not a sailboat but the senatorial yacht that the Japs blow out of the water at the beginning of the film The Final Countdown (1980), in which a U.S. aircraft carrier enters a time warp, emerging just before Pearl Harbor. Really, though, all I want is a wooden bateau small enough to cruise along the Providence rivers during WaterFire. But Generalissimo Barnaby Evans scotched that idea when he engineered a ban on most private boats during those marvelous events.

So, returning to Gehry’s boat, the touches that identify the boat as a product of the Gehry mind are quite enchanting, and are no problem on the scale of a boat. Let him design a car, too, if he has not already. (In fact, I wish he’d spend all his time designing boats and cars; the world would be the better for it.) But at the scale of a building Gehry’s tics are tedious in the extreme, and on a smaller scale possibly dangerous. Foggy – the boat’s name, from Gehry’s initials – has a ridiculous wheel that looks as if it might yank Capt. Cohen’s finger off if he sails it in rough seas. A scene with the captain struggling at the wheel in a storm is almost mandatory in films of a nautical theme.

Gehry already has a sailboat moored in California, which he plans to rename Foggy 1 – readers may feel free to chip in for the psychiatrist to plumb that one. I hope Cohen will invite Gehry out on Foggy (the new one, not the old one) a lot, so that FOG can spend a lot of time rubbing shoulders with the Kennedys of Hyannis Port on Cape Cod, where the Esquire article begins.

Gehry must think himself quite a guy. “On a boat like this, it’s about romance and romantic encounters,” the architect says. Here is Ward’s description of the boat’s interior space:

At the heart of that fantasy is the yacht’s saloon, whose soft furnishings include a psychedelically colorful carpet created by Joyce Shin, Gehry’s ­daughter-in-law. It also includes sheepskin coverings for the couches from New Zealand, which turned the space into something between an Austin Powers–style lair and a discotheque.

Go for it, Frank! Here’s where you can plan your next project – according to Esquire – a space ship. That’s rich! Get it out of here! That’s what it’s for! Too bad we can’t blast all of Gehry’s buildings off into outer space!

[Tip of the bicorne to Gary Brewer for sending the Esquire article to TradArch.]

Below is a yacht allegedly designed Zaha Hadid, or by her firm since her death. 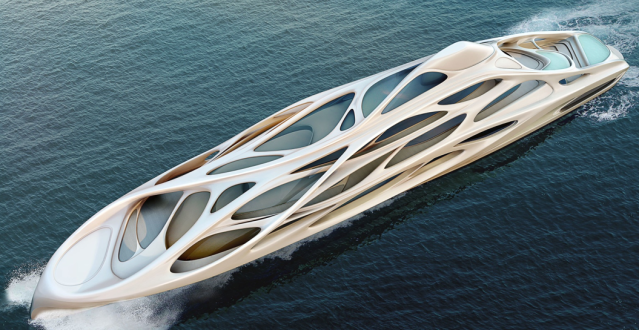 This blog was begun in 2009 as a feature of the Providence Journal, where I was on the editorial board and wrote a weekly column of architecture criticism for three decades. Architecture Here and There fights the style wars for classical architecture and against modern architecture, no holds barred. History Press asked me to write and in August 2017 published my first book, "Lost Providence." I am now writing my second book. My freelance writing on architecture and other topics addresses issues of design and culture locally and globally. I am a member of the board of the New England chapter of the Institute of Classical Architecture & Art, which bestowed an Arthur Ross Award on me in 2002. I work from Providence, R.I., where I live with my wife Victoria, my son Billy and our cat Gato. If you would like to employ my writing and editing to improve your work, please email me at my consultancy, dbrussat@gmail.com, or call 401.351.0457. Testimonial: "Your work is so wonderful - you now enter my mind and write what I would have written." - Nikos Salingaros, mathematician at the University of Texas, architectural theorist and author of many books.
View all posts by David Brussat →
This entry was posted in Architects, Architecture, Art and design, Providence and tagged Barnaby Evans, Frank Gehry, German Frers, Joel Pidel, Kennedy, Richard Cohen, Sailboat Design, The Final Countdown, Vicky Ward, WaterFire. Bookmark the permalink.