See Paris while it lasts

The facade of La Samaritaine that faces the Seine. (Wall Street Journal)

Many years ago I marveled at the Art Deco building that houses La Samaritaine department store along the Seine. And I recall eating at the café behind the giant letters on top. That end of the building will survive, at least for a while. At the other end, however, a ruling to allow a tragic desecration of the famous rue de Rivoli has just been made by France’s highest court. 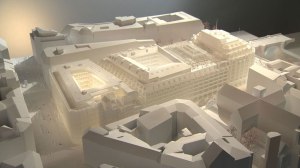 “Court Approves Modern Building in Heart of Paris,” reads the headline in the Wall Street Journal. The headline should send shivers up the spine of all who love Paris. The ruling overturned a court order halting construction of the modernist design by SANAA, and a later one upholding that ruling on appeal. It offers a precedent that could over time wreck the beauty of the City of Light – if Parisians sit back and do nothing.

Most cities have already allowed modern architecture to wreck their beauty, doing nothing until it is too late. The evaporation of aesthetic charm proceeds slowly, until it is gone before it can be stopped. Paris, like Venice, Rome and a very small number of other cities, has expressed a more sensitive survival instinct, passing laws to slow this process. But Paris has stumbled, and it remains to be seen whether she will fall.

Our Paris correspondent, Mary Campbell Gallagher, of SOS Paris, has sent out a dire alarum. “Seven stories tall, made of undulating glass, without doors or windows, and at 265 feet long as long as a New York City block, this bizarre structure will be as alien as a spaceship in historic central Paris.”

To the battlements indeed!

This blog was begun in 2009 as a feature of the Providence Journal, where I was on the editorial board and wrote a weekly column of architecture criticism for three decades. Architecture Here and There fights the style wars for classical architecture and against modern architecture, no holds barred. History Press asked me to write and in August 2017 published my first book, "Lost Providence." I am now writing my second book. My freelance writing on architecture and other topics addresses issues of design and culture locally and globally. I am a member of the board of the New England chapter of the Institute of Classical Architecture & Art, which bestowed an Arthur Ross Award on me in 2002. I work from Providence, R.I., where I live with my wife Victoria, my son Billy and our cat Gato. If you would like to employ my writing and editing to improve your work, please email me at my consultancy, dbrussat@gmail.com, or call 401.351.0457. Testimonial: "Your work is so wonderful - you now enter my mind and write what I would have written." - Nikos Salingaros, mathematician at the University of Texas, architectural theorist and author of many books.
View all posts by David Brussat →
This entry was posted in Architecture, Architecture History, Art and design, Development, Preservation, Urbanism and planning and tagged Bacall, Beauty, Bogard, Casablanca, France, La Samaritaine, Mary Campbell Gallagher, Paris, SOS Paris. Bookmark the permalink.

2 Responses to See Paris while it lasts