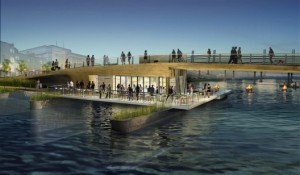 A bridge project I’d hoped and prayed was dead has risen to become, for lack of more ambitious possibilities as yet, the likely first part of the Route 195 development project to move forward in Providence. The streets and utilities have been laid, the hook has been baited for development, and more proposals have materialized than I would have bet on a year ago. I expected little or nothing to emerge, and indeed the “shadow parking” that has recently stumped the authorities reflects what I had thought might be, under the worst scenario, the best that could be hoped for (or feared).

But since things are moving slowly, the pedestrian bridge proposal that won the design competition that was the last developmental gasp of the ghastly mayoral administration of (now U.S. Rep.) David Cicilline has reared its ugly head. In 2010, an elegantly traditional bridge plan inspired by the Pont des Arts, in Paris, and designed by the late Bill Warner was defenestrated, an unnecessary design competition was held, and only modernist proposals were, it seems, permitted into the competition. The result was this bridge, a typically non-bridge bridge cliché of the sort that modern architecture specializes in.

As “value engineered” since its victory, the bridge’s covered restaurant and gathering place that had been part of the proposal’s allure have been dropped. What remains is actually less unattractive than is conventional in modernist design. The surface of the bridge will be an attractive type of wood (not sure it’s real, but it has the personality of wood), but there will be enough metallic sterility in the benches, railings, low lighting and other features (in the style of the bus-stop kiosks appearing around the city) to establish its credentials as a modernist bridge. In short, it will do its part to short-circuit any possibility that the city and state could use the 195 development to boost its economic future.

Providence has long bragged on its low rents compared with Boston, hoping that this would encourage developers to build here and draw businesses, workers and residents from the Hub. But what the developers discover is that Providence also has building costs about as high as those of Boston. This means that any development is unlikely to make enough of a profit with its low rents to pay back its investors for the cost of the project.

Rhode Island has sought over the years to level that tilted economic playing field with tax subsidies to reduce development costs. It has not worked very well, yet this is the strategy adopted by the Route 195 Redevelopment District Commission.

An editorial I wrote in 2011 when I was on the editorial board of the Providence Journal, about tax subsidies in the legislation that created the Route 195 district, kept disappearing from the computer system and never ran. I don’t know why this was so, but the subsidies are still there in the law, Sec. 42-64 (2011), largely unnoticed by the local media.

Here are the incentive programs as summed up in the law:

I think there is a superior alternative. Readers have read about it in this space many times before. It is for the commission to encourage developers to propose traditional styles of building on the Route 195 land. That would be more popular. Popularity would make the development process flow more smoothly, with less expense wasted on lawyers and other tools for overcoming delay in the process. So it would be easier, and it would increase the likely success of the project. It would be more sustainable because traditional architecture – born in the lengthy pre-thermostat era – is designed to use architectural features rather than petroleum-based technology to help heat and cool buildings. Most of all, it would strengthen an already existing brand of traditional design that remains Rhode Island’s chief development asset in competition with other states, and will remain so until the state gets its economic house in order.

The design template to build on the Route 195 land has, alas, already been set at “mishmash” by the Developer’s Tool Kit published online by the the commission. The proposed pedestrian bridge buys into that mishmash. If Bill Warner’s “Pont des Arts” concept had been accepted – he was the design consultant for the Iway and designed the 195 bridge that ought to be named for him – the pedestrian bridge would probably have been built by now, and its elegance would be a very legible signal to developers of what they are expected to propose on the development land. It need not be a matter of law or of zoning but a matter of expectations, which developers prefer when they are clear.

Instead, we’ll have the pedestrian bridge that – apparently – is about to be built, slated for completion in 2016. It will signal developers to propose the ultimate in cheapo cheesy, a clear but unwanted signal that Providence is seeking the same tedious stuff that is going up, mostly, in all the other cities and states.

Way to build up the brand, guys!

This blog was begun in 2009 as a feature of the Providence Journal, where I was on the editorial board and wrote a weekly column of architecture criticism for three decades. Architecture Here and There fights the style wars for classical architecture and against modern architecture, no holds barred. History Press asked me to write and in August 2017 published my first book, "Lost Providence." I am now writing my second book. My freelance writing on architecture and other topics addresses issues of design and culture locally and globally. I am a member of the board of the New England chapter of the Institute of Classical Architecture & Art, which bestowed an Arthur Ross Award on me in 2002. I work from Providence, R.I., where I live with my wife Victoria, my son Billy and our cat Gato. If you would like to employ my writing and editing to improve your work, please email me at my consultancy, dbrussat@gmail.com, or call 401.351.0457. Testimonial: "Your work is so wonderful - you now enter my mind and write what I would have written." - Nikos Salingaros, mathematician at the University of Texas, architectural theorist and author of many books.
View all posts by David Brussat →
This entry was posted in Architecture, Development, Providence and tagged 195 Redevelopment District Commission, Bill Warner, Bridge, Design Competition, Rhode Island. Bookmark the permalink.