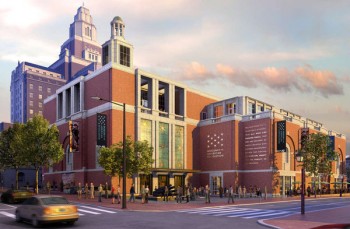 Rendering of Museum of the American Revolution. (RAMSA)

Robert A.M. Stern, the only classicist among American starchitects, designed a new building for the Museum of the American Revolution, in Philly, a couple of years ago. The design, which was neocolonial, hit the usual buzzsaw wielded by the usual suspects, but seemed to be heading for construction at any time. Now the city’s Art Commission has asked Stern to kill the cupola.

Who the heck are they? Are they the Cheesesteak Fine Art crowd? Inga Saffron, who has a lovely name, is nevertheless an Inquirer architecture critic who also came out guns blazing against the design two years ago and now has picked up her bazooka again. Her piece is here. It’s worth reading because it’s a sort of template of the arguments modernists use under these circumstances. She probably has about half of the sentences on save/get! (I suppose that dates me. Early computer lingo for a button that has often-used phrases or command strings on it. I wish my computer now had save/gets. It probably does but I don’t know how to use them.) 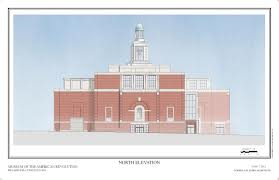 I hope Stern will resist the commission and return with a better cupola and answer some of its other reasonable questions. The donor who is funding most of the renovations says he didn’t like the cupola, but maybe he was just trying to snuggle up to Inga. He was not induced to say he disliked the neocolonial style. Saffron would not like the design even without the cupola because it is, to use her word, a “pastiche.” That’s modernist lingo for a revivalist style, though the word actually means something completely different – a mishmash. But then modernists are not rigorous in their rhetoric. Why should they be? They are rarely challenged and rarely need to flex their mental muscles, which, as I pointed out in a recent post, have atrophied.

And I have to catch a bus, so goodbye!

This blog was begun in 2009 as a feature of the Providence Journal, where I was on the editorial board and wrote a weekly column of architecture criticism for three decades. Architecture Here and There fights the style wars for classical architecture and against modern architecture, no holds barred. History Press asked me to write and in August 2017 published my first book, "Lost Providence." I am now writing my second book. My freelance writing on architecture and other topics addresses issues of design and culture locally and globally. I am a member of the board of the New England chapter of the Institute of Classical Architecture & Art, which bestowed an Arthur Ross Award on me in 2002. I work from Providence, R.I., where I live with my wife Victoria, my son Billy and our cat Gato. If you would like to employ my writing and editing to improve your work, please email me at my consultancy, dbrussat@gmail.com, or call 401.351.0457. Testimonial: "Your work is so wonderful - you now enter my mind and write what I would have written." - Nikos Salingaros, mathematician at the University of Texas, architectural theorist and author of many books.
View all posts by David Brussat →
This entry was posted in Architecture, Architecture Education, Architecture History and tagged Architecture Here and There, Criticism, David Brussat, Inga Saffron, Museum, Museum of the American Revolution, Philadelphia, Philadelphia Inquirer, RAMSA, Robert A.M. Stern. Bookmark the permalink.